In a recent note (Rock Talk—Is it all awash, or not?) we discussed minor conflicts in paper-chart rock symbol terminology for a rock that covers and uncovers, height unknown (US supplemental symbol Ka and INT 1 symbol K11). One of the virtues of moving onto electronic navigational charts (ENC) is we no longer rely on the design of the symbol to convey specific information, and instead we get this from a direct query of the ENC database. This database uses an internationally accepted terminology that overrides national nuances.

Below is a summary of common paper-chart rock symbols with a graphic presentation of their relative soundings.

ENC charts, however, have simplified the actual symbols, not just for rocks, but also for other objects traditionally shown on paper charts. Part of this difference is schematically shown in Figure 2. Going forward, we can abbreviate "paper charts" with RNC (Raster Navigational Charts), because that form of an electronic chart is just an image of the actual paper chart.  The figure caption also refers to INT 1, which is the International Hydrographic Organization (IHO) standard for paper chart symbols.

The use and meaning of rock symbols on ENCs are not the same as they are on paper charts. We have gone from seeing some 6 or 7 "rock symbols" that tell us much about the rock from the symbol alone and knowledge of the tide height, to seeing just two different rock symbols on an ENC, some of which may not show at all, depending on how we have the optional soundings set—which brings up the crucial ENC topic of the "isolated danger" symbol, which is a powerful new feature of ENCs; the subject of a later note.

When using ENCs, we must learn to get crucial information from clicking the symbol (called a cursor pick) and reading about it in another window. The rock symbols alone no longer convey detailed information.

This change in chart reading practice required when using ENCs can be a challenge, depending on individual experience. Having used paper charts for 30 years, my initial attitude toward these simplifications of the symbols, and rock symbology in particular, was negative, and I was not timid in complaining about it. However, the more I have used ENCs and studied the goals of the IHO in their "new" system (it is actually some 10 years old at this point!), I have changed my opinion on this.

Although we might miss our traditional symbols, there is much virtue in not having to learn all the nuances of the traditional US rock symbols in the first place. In fact, many mariners who did not need to know these details to pass a navigation exam may not have been aware of all the information contained in the paper chart symbols. It is not even that transparent when searching Chart No. 1, without training on the use of that important publication.

Using ENCs, we only have to teach that there are two types of (common) rock symbols, an isolated asterisk or an isolated plus sign in a dotted circle. To know more about that rock, just click it. The procedure is easier to learn than memorizing multiple symbols, and probably a safer way to use charts. We must train ourselves to click every rock that is near our route.

The way we learn more specifically what an asterisk rock means on an ENC is a cursor pick. Then we will be told the "value of its sounding."  An asterisk rock with the (9) beside it on an RNC will report a sounding of -9.0 ft in the ENC. In ENC reports, a negative sounding is a drying height. 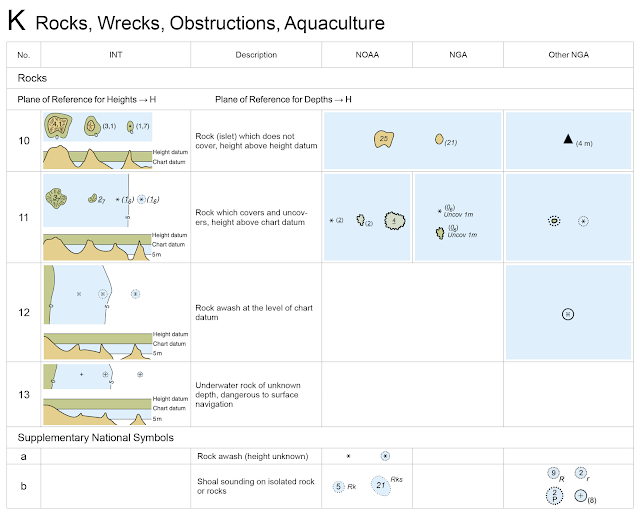 Posted by David Burch at 4:52 PM No comments:

This is a holding place for an article to be added in the Spring of 2017.

Two references (may not be accessible any longer)