Social Distancing and the Navigation Rules

These sad times have introduced a new terminology to the public called social distancing, but this is not a new concept to mariners familiar with the Navigation Rules; it is called close-quarters. Its goal is precisely the same vessel-to-vessel as it is person-to-person: to prevent harm by not getting too close to each other.

The definition is the same in both applications. We want to define a space around us within which our own safety is under our own control. If we let the other get closer, vessel or human, we are not protected against a sudden, unexpected maneuver of the other.  Our close quarters or social distance is our safety zone wherein  we can control our fate with our own maneuver and not be dependent on the other vessel or human.

The Navigation Rules effectively instructs us not to let any approaching vessel into our close quarters. The term appears explicitly in Rule 8, Action to Avoid a Collision, and in Rule 19, Conduct of Vessels in Restricted Visibility, but it is also implied in Rule 17, Action of the Stand-on Vessel that instructs us to maneuver if the other vessel is "not taking appropriate action," which means, among other things, is getting so close we could not avoid a collision by our own maneuver.

The dimensions and shape of close quarters amongst vessels is not defined in the Navigation Rules but has been addressed in numerous court cases. Going slow in a narrow channel, it could be yards; at high speeds in the open ocean, it is more often thought of in miles. And it depends on the vessels involved. It is the knowledge and prudence of the skipper to determine the extent of their own close quarters in various circumstances.

The size of the social distancing range is clearly oversimplified in the government specified distance of 6 ft, which, even worse, is sometimes specified as 3 ft—close enough that someone could spit on you and grab your phone.

Six feet is likely chosen because it is easy to think of. We can picture 6 ft; it is a nice round number—half a dozen. But you can smell someone's perfume at 6 ft off, which quite literally means molecules coming off of their body have entered your body. But these social matters are more complex that vessel traffic.  It all depends on what you want to protect against. Dr Anthony Fauci demonstrated in  a TV interview what a 24-ft sneeze looks like... and it did not seem so unusual at all.  The social distance for a shady character on a dark street is going to be larger than 6 ft.

But my point for now is simply that these are the same concepts, and it might on some occasions help to keep that in mind, both on the water and on the dock.

Here is how this term appears in the Rules... with colored text added

Conduct of Vessels in Restricted Visibility, Rule 19 (d). A vessel which detects by radar alone the presence of another vessel shall determine if a close-quarters situation is developing and/or risk of collision exists. If so, she shall take avoiding action in ample time, provided that when such action consists of an alteration in course, so far as possible the following shall be avoided:

(ii) An alteration of course toward a vessel abeam or abaft the beam.

Rule 19 (e). Except where it has been determined that a risk of collision does not exist, every vessel which hears apparently forward of her beam the fog signal of another vessel, or which cannot avoid a close-quarters situation with another vessel forward of her beam, shall reduce her speed to be the minimum at which she can be kept on her course. She shall if necessary take all her way off and in any event navigate with extreme caution until danger of collision is over.

Action by Stand-on Vessel,  Rule 17 (a) (i) Where one of two vessels is to keep out of the way, the other shall keep her course and speed. (ii) The latter vessel may, however, take action to avoid collision by her maneuver alone, as soon as it becomes apparent to her that the vessel required to keep out of the way is not taking appropriate action in compliance with these Rules.

...one of which is avoiding close quarters.

Note that Rule 19d is a much stronger rule than others in this regard. Action to avoid a collision and related rules in clear weather refer to actions that "avoid close quarters," whereas Rule 19d in restricted visibility instruct us to maneuver to prevent the development of close quarters.  This calls for earlier maneuvers.

Posted by David Burch at 5:02 PM No comments:

In early printings of our textbook GPS Backup with a Mark 3 Sextant we discussed the accuracy of the shortcut procedures using our custom sun almanac.  These notes did not account for the type of sextant being used, but now that we have a dedicated online course for Backup Cel Nav that includes a Mark 3 sextant, it is now assumed that we would be using that type of sextant, so we need to fold in its own inherent uncertainties. 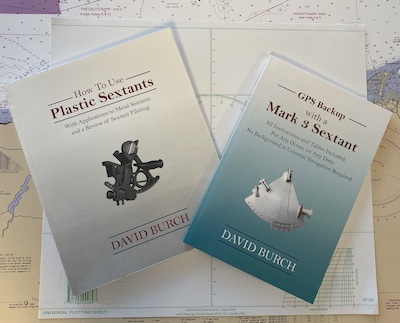 We have numerous examples that show that our custom long-term sun almanac can usually provide declination to within about ±1' and GHA to within ±2', and then we have approximations to the sun's semi-diameter (we call it 16' always) and we have abbreviated Refraction and Dip tables, so on the Latitude reckoning we have about a ± 2' uncertainty, with more like ± 3' on the Longitude reckonings.

We have a sextant (the Mark 3) that can only be read to ± 2’ and we have to effectively do this twice counting the index error measurement. Independent uncertainties add as the square root (sqrt) of the sum of the squares, so this sextant uncertainty is about sqrt (4 + 4) = 2.8'.

This is to be compared to best possible with a good metal sextant and full almanac and a 1000-sight experience of ± 0.5’ for either a Lat or an actual fix of both Latitude and Longitude.

For Lon we can assume the watch is right, so sextant error is not really a factor, and we are left with finding peak time of the LAN curve of sextant heights versus UTC, which we combine with our GHA uncertainty of ± 3'. 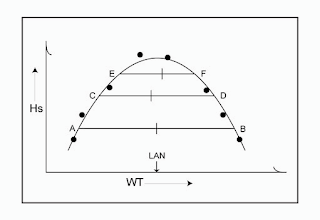 We can typically find the center of that curve to within  about 1 minute if we have good sight data. Sometimes half that, but for safety let's call this a 1 minute uncertainty, which in turn leads to a Lon uncertainty of ± 15'.  We combine this with the GHA uncertainty of ± 3' for a final value of sqrt(15^2 + 3^2) = 15.3.  Thus for longitude sights at LAN we have:

We expand the 15' a bit as there can be other uncertainties if we are moving very much in the N-S direction during the time we are measuring the curve of Hs vs UTC. This distorts the Hs curve, and the center does not reflect the actual location of the sun crossing our meridian.  For typical yachts this is usually a small factor.

This backup method has a large Lon uncertainty, but we must remember that this does not mean the Lon is wrong by that much. It most likely is not, but it is just uncertain by that much and we have to keep that in mind during decision making.  Indeed if we do several LAN fixes over a few days and our DR is agreeing with these fixes, then we have learned that we are likely doing better than this large uncertainty.

We have a new Regiment of the North Star that can be used for finding latitude from Polaris without the official USNO annual nautical almanac. It can be used anytime you see Polaris, on any date or year. The method relies on identifying one of two stars, Alkaid at the tip of the handle of the Big Dipper and Segin, the trailing star of Cassiopeia on the other side of Polaris. 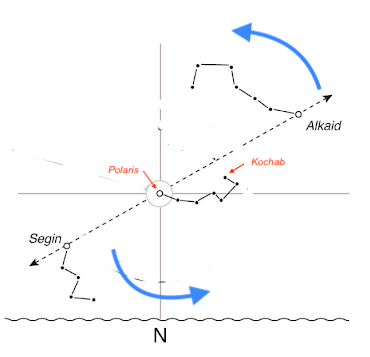 Both stars are trailing stars, meaning as the sky rotates, these are the stern of the constellation thought of as a boat sailing around the pole, once a day. They are also about equal distance from the pole and opposite to each other.

They are not bright stars. Alkaid at is the brightest of the Big Dipper stars, which as a group represent typical Magnitude 2 stars.  The leading 3 stars of Cassiopeia are magnitude 2 and the trailing 3 are magnitude 3.  Segin is the weakest of the lot at 3.3.

Because these stars are faint, we have to rely a lot on the pattern of the constellation. Alkaid is very easy, at the tip of the handle of the Big Dipper, but we need more help with segin.

Cassiopeia looks like an "M" from the Middle... meaning standing at the pole of the sky where Polaris is. Keeping that in mind, you can find this group, located about the same distance from the Pole as Polaris is on the other side.

Also the trailing loop of the "M" Cassiopeia is lazy, meaning not as tall, which also helps find this weak member of the group. 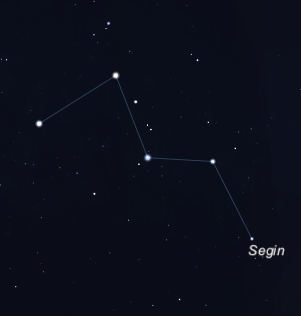 Other tips that help are these:

(1) Often the entire sky between Cassiopeia and the Big Dipper is blank except for two stars, and they will be Polaris and Kochab, one the Guards on the tip of the cup of the Little Dipper.  Kochab, Polaris, and Alkaid are about the same brightness.

(2) The line between Segin and Alkaid passes very closely through the the pole of the sky, and if you zoomed in you would see that Polaris is on the Cassiopeia side.

(3) We are talking about a large span of the sky between Alkaid and Segin. At middle latitudes they span from about NW to NE in bearing.

(4) Since the stars are faint, when any part of either constellation is within some 10º of the horizon, they are likely to be extinguished by the (clear weather) atmosphere.