A true direction is the bearing of a target from your location measured relative to true north (000 T). True north is the direction on the horizon that is directly below the pole of the sky that all stars rotate about. It is the direction from any point on earth toward the North Pole, the one point on earth that is at latitude 90º exactly. Standing at this point, the true pole of the sky is overhead and every direction from there is south! True north is always placed at the top of standard nautical charts, which are made on a Mercator projection. Due east true is on the right side; due south on the bottom; and due west on the left side.

(Note that true north is not the direction to the North Star, Polaris. Polaris is overhead on latitude 89º 20' N, so it is about 40 nmi south of the true pole at any time. This makes its actual bearing vary from about 359 T to 001T depending on the date and time of night.)

Also unlike true north, magnetic north is not the direction to any specific point on earth. If we take a simple hiker's compass and look at the needle, it is aligning with the earth's magnetic force lines at this location, pointing to our local value of magnetic north.

Since mariners rely on compass bearings to find their way across a chart, we must know for each point on earth what the difference is between magnetic north and true north.  Then we can read a magnetic direction from the compass and correct it to get the true direction that we can plot on the chart relative to the top or sides of the sheet.

The difference between true north and magnetic north is called variation or magnetic variation. Its ENC object name is MAGVAR. Magnetic variation is a well known number for all points on earth, but there are rare isolated regions, usually small, of anomalous values.

To see how this works with variation of 16º E, if we are told that a target is at bearing 050 Magnetic, we know that means it is located 50º to the right of 000 Magnetic,  the direction of the local magnetic north. We know from the variation that magnetic north is 16º to the east of true north (000T), so this bearing of 050 M is pointing in the direction 050 + 16 = 066T. In short, regardless of the bearing around the compass card, the way to get true bearing from magnetic bearing will always be:

When the variation is west, we subtract it from the magnetic bearing to get true bearing.  These rules are summarized below.

A compass direction is the bearing of a target (or the bow of the boat) from your location read directly from a compass. These are bearings relative to 000 on the compass card. Ideally this would be identical to the magnetic direction, which is afterall defined as the direction a compass needle would point. But that is assuming the needle is feeling just the earth's magnetic field. We assume the compass is not being disturbed by any external magnetic fields.

If you have a compass sitting in a clean position, not near any magnetic materials, then 000 on the card will point in the direction of the earth's magnetic field, and indeed bearings read from this compass will be the same as magnetic bearings.  But set a magnetic screwdriver near that compass and you will see the needle move to a new direction, which is not the correct magnetic direction.

When the deviation is west, we subtract it from the compass bearing to get magnetic bearing.  These rules are summarized below.

Here are the rules


Maritime training has traditionally called going from Magnetic to True or going from Compass to Magnetic as "correcting" and going the other way as "uncorrecting." Neither are very tidy terms, but we feel it is best to not generate new terminology in this arena.

On the other hand, individual mariners are welcome to create whatever rules work for them.

With all that said, on a long trip where you are likely to be tired when navigating and the local variation is say 17º E, it pays to just write somewhere prominent in the nav station that

Then you are less likely to make a mistake when tired, and others at the nav station can see this to keep it in mind as well. This is especially true on a long trip that covers new waters for you, where you will not know the variation by heart. This saves looking it up every time you need it. Then just update your note as the variation changes. We learned this trick well on a trip from Long Island Sound, NY to San Juan Islands, WA down through the Canal.

If you have failed to do that and end up really tired and maybe a bit seasick on top of that, and the conditions are terrible and it is hard to think, then just look at a compass rose and draw a line across it to get the conversion done for you. 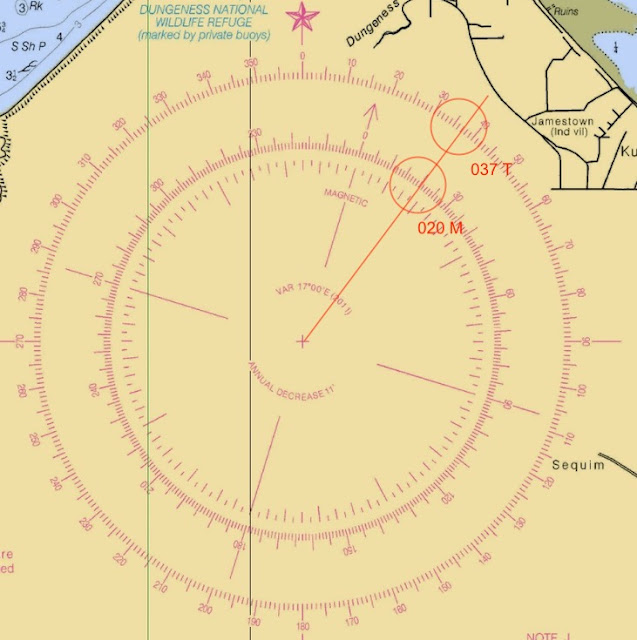 Doing a compass conversion with the compass rose for variation 17ºE

We tend to concentrate on variation, but the deviation is handled the same way. On a non-steel boat we should be able to adjust all of the deviation out of our compasses.  Below we work a generic example with both variation and deviation.

As a minor point with regard to these conversions, in our course we do not use the term "compass error." The official US maritime definition (Bowditch, Dutton, etc, and see Note 1 below) of "compass error" is the algebraic sum of the deviation and variation. To me this is a muddy concept, which is to be avoided. First and foremost, variation is not an error in any sense. It is the deviation alone that is an error.

Secondly, it combines two completely different effects. Variation is a well-defined physical property of the planet earth at that location and date that applies to all compasses, everywhere on the vessel. We can look variation up very easily from numerous sources beside the chart, including phone apps.

Deviation, on the other hand, is a totally nebulous quantity, difficult to measure, unique to a specific compass, different on every vessel heading, and likely to change over a single long voyage. In short, we recommend keeping these two concepts completely separated and not to ever combine them into a single "compass error."

One way to remember the terms if you are new to the subject is to ponder the thought that "God makes Variation; Man makes Deviation."

We propose trying the one simple rule (correcting add east) for all conversions, which I will illustrate in a moment, but many mariners have found a form solution useful. They typically look like:

You put in what you know and go up or down the form to find the missing values. In this form the var and the dev will have labels E or W. Going up this form is correcting, going down is uncorrecting.

Here is another more practical form of the form 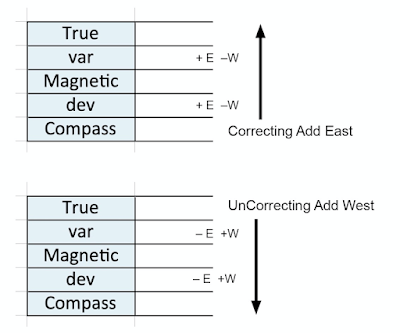 In other words, "going up" is finding Magnetic from Compass so Dev E is +, and finding True from  Magnetic so Var E is +

The jingle used is Can Dead Men Vote Twice... at elections, which reminds of the correcting sequence with "at elections" reminding us to add east when correcting.

Here is a set of practice exercises from our Navigation Workbook: 18465Tr

This is 9 practice exercises in carrying out various compass conversions. In an extended career in navigation, you might actually run across any one of these, although it is more rare on non-steel boats. Again, on non-steel boats, we should be able to make all compasses free of deviation, but that does not mean they will stay that way.  A lightning strike, for example, is a rare event that can indeed disturb the compasses, as can loading the vessel in new ways, or installing equipment without thinking about the compasses.

In modern times, we tend to have a lot of compasses (electronic and magnetic), and it is rare to have them all agree, so we have to then track down which ones have deviation and what it is, and generally to do that we have to have complete control over these types of conversions.

Example (A) is pretty basic. We are at sea at a known Lat-Lon, time, and date and we want to check our compass for deviation. We point the vessel to a star and the compass reads 296 C. For this time and place, we then use celestial navigation to compute the true bearing to that star, which is 280 T. We know from our chart or software that the variation at this location is 16ºW. So what is our deviation?

Dev is the difference between compass and magnetic, so we have to compute the magnetic from known true and variation. This is called uncorrecting and the rule is uncorrecting add west, so magnetic is 280T + 16W = 296 M, which is the same as compass, so the deviation is 0.

Example (B) would be the case where I was told that the proper course to stay on the entrance range is 014 M, so i need the compass course to steer, knowing the compass has a deviation of 5E on that magnetic heading, and I want to check this information on the chart, but the only chart I have does not have a magnetic compass rose, so i need the true heading as well, in an area where the variation is 21E.

Example (C) We want to find the local variation, because we do not have a chart with it, nor the software to compute it. We point the boat toward an object we know the true bearing to (ie 007 T), which we could get from a chart in coastal waters or at sea from a cel nav computation.

We read our compass heading and we know the dev at this heading, so we can find the Magnetic heading by correcting 354C - 8W = 346M. The rule is correcting add east, but this one is west, so we subtract.

Since this one more involved, let's see if the form helps:

We get Magnetic going up, which is correcting, which is add east, subtract west, so we now have

And we are back to figuring the difference between Magnetic and True as before, which we know is 21º, so the form now looks like

The question is, does the form help, or can we do it with just "correcting add east" and then knowing what we mean by correcting.

Here are the answers for more practice.


Note 1.  We have yet to find an "official" British Admiralty definition (The Admiralty Manual of Navigation, Vol 1 does not use the term "compass error."), but in the British book Self Instruction in the Practice and Theory of Navigation, Vol. 1 by the Earl of Dunraven (London, 1900) on page 66 he states: "Error is caused by Variation or by Deviation, or by both combined. We shall consider the effect of Error from whatever causes it to arise."
Posted by David Burch at 5:52 PM No comments: