A Nice Thermometer Dial—tiptoeing onto the metric scale

But I must admit to just realizing that there are some other easy ones as well. Namely for any temperature T = 10x °C (x a digit), we have F = 18T + 32, which are all whole digits. Thus a nice new few to learn, so we can watch the Canadian weather reports and know what the temperature is... not to mention getting in step with the rest of the world. This dial emphasizes these points.

We call this the "Easy Conversion Scale." It has been adopted by Fischer Precision Instruments in German for a few of their products sold in the US.

On a related effort to nudge the metric scale more to the front, we have made a pdf version of the scale shown below. Sort of a crafts project. It prints on letter size paper that can be cut vertically to make the tall scale. 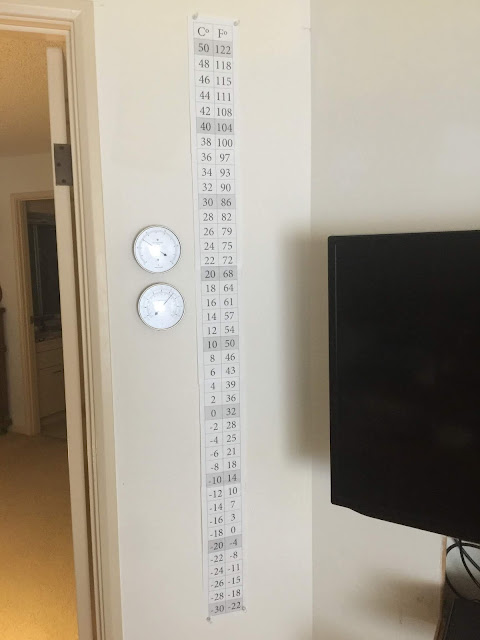 A scale like this would be great for a classroom so that the values are upfront for quick reference. Then we can watch the frequent global weather forecasts from NHK (Japan) and France 24 and get a better feeling for global temperatures.
Posted by David Burch at 10:29 AM No comments: 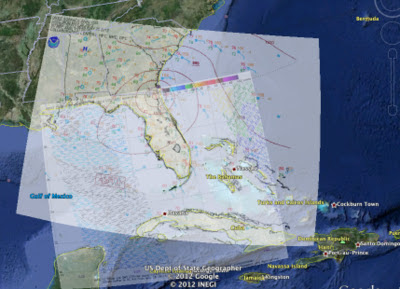 We can overlay the graphic display of ASCAT data on Google Earth (GE) in such a way that it will be automatically updated with the latest satellite pass each time you open Google Earth. It is not completely automatic process, but it is more or less straight forward.  Below is a video that explains the process.  Note that this was a post from 2012, now updated in 2018, but essentially no changes to the process. This is not new info, but this new video may raise some interest in the process.


Once you have the kmz files created in GE and stored on your computer, you can then send them to a friend to run on their computer.  Below are a couple examples we made. These too can just be saved and used as you like.

The video shows that the descending pass kmz file can be made from the ascending file, by just changing the kmz file name and one letter in the link.

We also have others for  Bermuda, Transpac, Tropical Atlantic, and Sydney-Hobart, Baja ascending, Baja descending.

This process can be pursued by adding weather maps, which can then be directly compared to the ASCAT data.  Here is an example for Florida waters to compare with the above FL ASCAT data. All are updated automatically.

Since ASCAT has two satellites (Metop A and Metop B), which follow the same orbits 47 minutes apart, there is another trick that can be done by georeferencing both in GE, side by side, you get effectively a much wider swath of data.  We miss squall activity that might have occurred between passes, but for ocean analysis it is a nice trick.  We do this in several of the above samples.

We have an extensive discussion of ASCAT data and its use in our new textbook Modern Marine Weather, 3rd ed.

Likewise we have other articles online about ASCAT.  An index to these is at www.starpath.com/ascat

It's Raining… What does that mean?

There is an easy answer, and I think everyone would get it right! 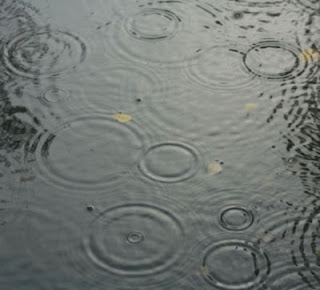 But without more information, we don't really know much about this rain or what it might imply. For beneficial marine weather work, or even for planning picnics, we need to know more about how rain is defined. In fact, the first thing we learn is that the water falling from the sky is not always "rain."

Checking with the National Weather Service we find there are effectively three categories of liquid precipitation: rain, drizzle, and showers, and each of these is further categorized by duration and intensity. The definitions have evolved because they are crucial to the understanding and application of this precipitation to weather analysis—or to picnic planning or to agriculture, or perhaps even to the existence of life on this planet. In short, it can be important.

Some sources argue there are only two categories, drizzle and rain, but our exposure to the science is mostly from forecasts and these refer to either rain or showers stressing or implying an important distinction between the two. I don't recall seeing any forecasts for drizzle, but we do get forecasts for thunderstorms, which bring “heavy rain.” Periodically we might see drizzle referred to as “mist” when it reduces the visibility to below

Rain. Precipitation in the form of liquid water droplets greater than 0.5 mm (0.02 inches) in diameter. If the drops are widely scattered, the drop size may be smaller.

The Observer's Handbook adds: Scattered drops that do not completely wet an exposed surface, regardless of duration, [up to] to a condition where individual drops are easily seen; slight spray is observed over the decks; puddles form slowly; sound on roofs ranges from slow pattering to gentle swishing; steady small streams may flow in scuppers and deck drains.
Visibility 1 km (0.5 nmi) or more.

The Observer's Handbook adds: Individual drops are not clearly identifiable; spray is observable just above deck and other hard surfaces; puddles form rapidly; sound on roofs ranges from swishing to gentle roar.
Visibility less than 1 km (0.5 nmi) but not less than 0.5 km (0.25 nmi, 550 yds).

Heavy rain. Rate of fall greater than 0.30 inches per hour.

Sometimes rain is further characterized by its duration.

Continuous rain. Intensity changes gradually, if at all.

Intermittent rain. Intensity changes gradually, if at all, but precipitation stops and starts at least once within the hour preceding the observation.

Showers. Precipitation from a convective cloud (cumuliform) that is characterized by its sudden beginning and ending, changes in intensity, and rapid changes in the appearance of the sky. The implication here is that “rain” in contrast comes from stratiform clouds (nimbostratus).

Thunderstorms. Though thunderstorms are often foretasted without reference to rain, it is implied that they will most likely bring heavy rain. Thunderstorms are a result of cumulonimbus clouds, which by their vary name means rain. There are of course smaller squalls with only moderate rain, or you may meet a squall stage with just light rain left over, and there is a category of squalls, low precipitation (LP) supercells, that do not have much liquid rain at all, but generally we can safely assume that a forecast with thunderstorms means that somewhere in the region it will have heavy rain, but it will be just underneath these cumulus clouds.

The affected area of convective weather (showers and thunderstorms) is given as:

Likely. Greater than 80% of the forecast zone.

Measurable precipitation means a total of at least 0.01 inch (ie the first tip of a tipping bucket rain gauge, which are calibrated in 0.01 inches per tip) 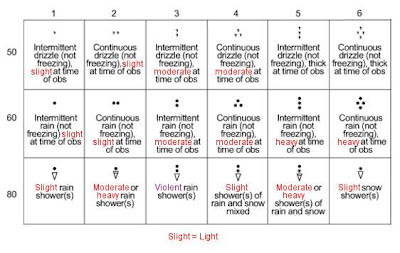 NWS rain symbols. I have added the red to emphasize the intensities of the rain, which follow the definitions above. We will follow up with more discussion of these later. Note they use the word "slight" for "light." It means the same, and everywhere else they use "light." A simple confusion that is maintained by the government as a way to support navigation schools. The word "violent" in code 83 is unique. If you have been in a tropical squall you will  know the term. It is essentially heavy rain in strong wind.

Stand by for more discussion of rain intensity and now to identify it.

Looking ahead, you might find interesting the great data from UW rain guages at
http://www-k12.atmos.washington.edu/k12/grayskies/nw_weather.html. Select Cumulative Rain at the ATG building roof at UW and other options of choice, and compare with forecasts and reports over the same period. We will be doing some of that in following articles.

We have also ordered a precision rain gauge for Starpath and we will link it to a video camera so we can get some practical feeling for what different levels of rain looks like.

Weather of the Pacific Northwest by Cliff Mass, UW Press, 2008

Refraction in a sink

Refraction plays a key role in celestial navigation because starlight coming in from the vacuum of outer space bends when it enters the atmosphere. The speed of light is slower in air, so the light bends (refracts), and as a result all the stars we see are actually not quite as high as they appear. We then apply a refraction correction to get them back to the right angle.

It is easy to see this effect in a bathroom sink by adjusting your sight angle to just not see the drain, then turn on the water and fill the sink, as shown below. 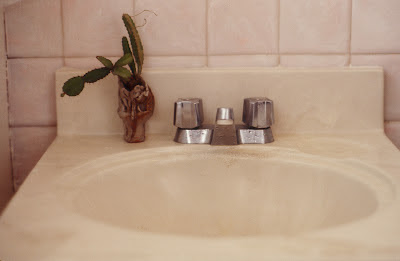 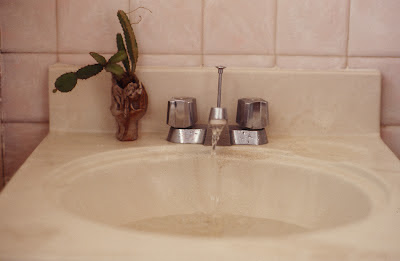 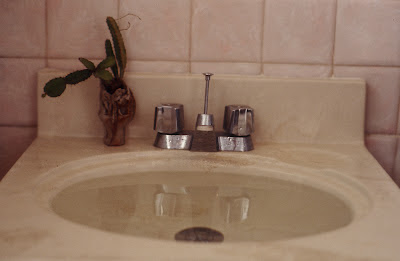 You are seeing the light bend toward you as it leaves the water surface.  Then let the water run out and the drain goes away.  Seems a nice way to demonstrate this effect.

Below is a schematic illustrating how this takes place, but as always with some hand waving needed to skip over  more fundamental issues. We think of light as a wave, with the lines AB being a wave front.  A fundamental point is light travels faster in air than in water. 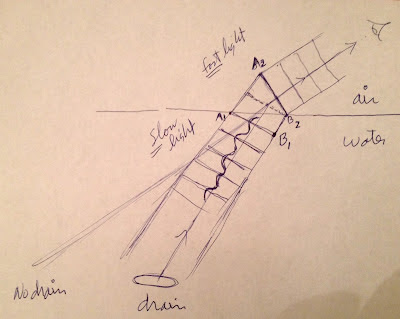 When the A1 side of the wave hits the surface and enters the air, the B1 side is still under  water. The A1 side starts to move faster now than the B1 side. So by the time B1 reaches B2, A1 has traveled quite a bit farther up to A2, and thus the wave front bends at the surface.

This simple picture shows why the angle you look at the drain (or star) makes a big difference. Look straight down at the drain (straight up to a star) and of course you do not see any change.  Light will always bend away from the surface entering into the faster medium