It is Raining – What does that mean? Part 3

More on rain... will it never end?


Below is a near-real-time (3-hr) image of  rainfall, worldwide, from the TRMM satellite.

Recall, I am trying to understand rain rates and how to interpret what we see when it rains. There are two earlier articles:

Part 2 gives an example of rain at the border between Light Rain and Moderate Rain.

I think we see from any of these TRMM images that most rain by area worldwide is Light Rain, meaning below 0.10"/hr, and most of the world's rain falls into the oceans. This is not just because there is more ocean than land, but it clearly shows that their are more rain clouds over the water than over the land. This probably makes sense from some basic hydrological reasoning.

You may find it interesting to note that rain fall rates are often presented on a logarithmic scale, meaning the range we can detect and be subject to varies my orders of magnitudes–not factors of 2 or 3, but factors of 10 or 100. We have (in inches/hr)


A short diversion on rain gauges

The smallest unit of rain fall that is commonly measured is 0.01" corresponding to one tip of a tipping bucket rain gauge. For those who have not thought of such matters ( I was in that category not long ago ) here is a short crude demo of how they work.  I am not at all sure what their accuracy is. We will check that later. This was an inexpensive unit, but it seems that there is some factory in China making all of them, so I would guess they have homed in on the dimensions and engineering pretty well. I have just ordered another one online, looks the same as this one, wireless, for $32 including shipping.  We shall see.  An expensive US model that sells for $500 promises 2% up to 1"/hr and 3% up to 2"/hr.  The latter (2"/hr) is the defining point for Violent Rain, the next and last category after Heavy Rain. As you see below this is a pretty simple device.


PS. At the end of the video it looks like I knocked the bucket over with the teaspoon to make my point, but that is not the case. It honestly tipped at the right time, to the drop!  All crude stuff, but it does show how it works and that it works about right.

Get 1 click in an hour (0.01") and you have barely measurable drizzle.  Get 10 clicks in an hour and you have 0.10"/hr which is the top of Light Rain or the bottom of Moderate Rain. The assumption might be that if you did get 10 clicks per hour with the onset of a new steady rain that these would be 10 more or less evenly spaced clicks, namely 60 min/10 clicks, or one click every 6 min or so.

But now we run up against the programming limits of an inexpensive device. As far as i can tell from the LaCrosse instrument, it is just accumulating the clicks and not computing an hourly rate based on what it knows.  That is, in principle, after the second click 6 min later, it might guess that the actual hourly rate is 0.10"/hr, even though it has only collected two clicks over a 6-min period, but that is not the way this one works.  It just counts the clicks and even looking out the window to see this is indeed a steady rain fall, your gauge will show a building rain rate for the first hour.  So you do not really know what the hourly rate is from the read out alone until it has collected rain for an hour or more.

If you were really-really into this, you could time the clicks yourself and compute the rate before the hour.  In fact, even with a cheap one like this you can download the data and deduce the rate after about 15 min or so.  I still have no idea how accurate that would be.

I suspect that a higher quality instrument would do this differently.  In other words, there are some rain gauges alone that cost 500 to 800$, so these would presumably be more accurate in their tips and also have software that actually computes a live hourly rate based on the actual time rate it collects rain.  These instruments would then show a dynamic hourly rate based on fluctuations in the actual rate.

To follow up on this we have purchased an even cheaper rain gauge from Timexweather. It was $32 including shipping on amazon.  Next we will test this one and report. I know the tension must be building. 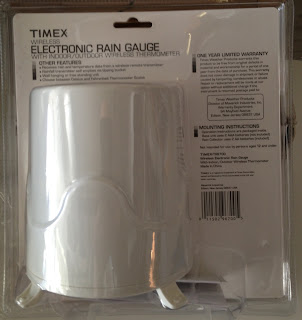 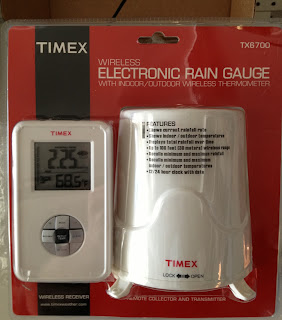 The last thought to add to this note is the concept of a rain intensity called Violent Rain, which is >2"/hr. Now this is indeed violent, but nowhere near world records which are above 10"/hr for short periods.

The NWS does not use Violent Rain scale and it is not in their Forecasting Handbook No. 1 as a classification for observations. They go up only to Heavy. The term is in use by the UK MetOffice, which you will note also calls Light Rain = Slight Rain. Recall the NWS has this mixed up in the Handbook, using both phrases for the same intensity.

I believe there is a value to the term Violent Rain, even though any level of Heavy Rain is really heavy, because mariners who might sail in squalls, especially those on the fringes of a hurricane will definitely see Violent Rain. I have seen this a couple times, once very dramatically. It was in a tropical system near HI, and in one squall we were standing in the cockpit of a 40-ft boat and without exaggeration we could not see the bow! It was like standing under a faucet. We were dumb struck as we stood there laughing at such an amazing demonstration of nature.

The other interesting aspect of this observation was we were in 30+ kts of wind, and this rain had totally beaten down the waves till they were a smooth rolling sea of swells only.

If you do a Google Search on "violent rain" you will see that this term has worked its way into our subculture to a high degree. It is used to name a huge range of endeavors.  I am sure, however, that those who use it, do not appreciate the actual nature of their namesake. They just have a feeling that it must be significant.  They are right.

Living in Seattle i do not think we will ever get a sample of this rain intensity to show here, but we are in daily contact with several boats in the tropics, and we will ask them to be sure to make a video if they run across it.  We will ask our friends at OARNW to watch for this as they spend some 60+ days rowing across the tropical Atlantic from Dakar to Miami.