Here is the picture of ocean currents as we study them in many navigation textbooks: 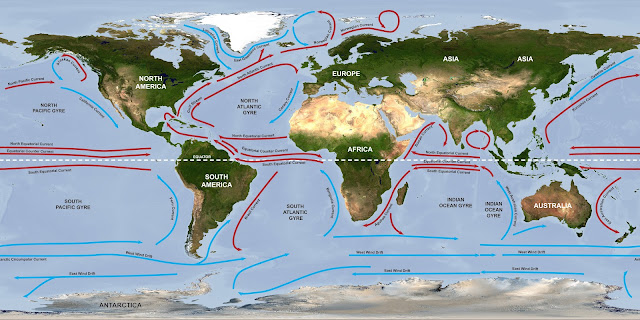 RSMAS at University of Miami is a good place to get an overview of the various current systems. (If you use their excellent resource, please help support them by signing their Guest Book. It is a link at the bottom of the home page index.)

Here, on the other hand, is what the ocean really looks like. In other words, there are average flow patterns as seen above and these have names, Gulf Stream, Equatorial Counter Current, etc, but at any one moment, at any location, you might experience one of these eddies or meanders that are spread across the ocean, in which case you could experience quite different currents than any climatic prediction for where you are. Pilot charts are one good way to get climatic predictions for specific locations and times, worldwide. (It is hi-res. Go to full screen.)


We learn much about these currents these days from satellite images and from ocean models. Below is another remarkable video from NASA that shows some element of the actual current speeds in these eddies. You can assume the color code for speeds is about what we showed in an earlier post, namely the red marks speeds of 5 kts or so, yellow-green around 4 - 3 kts and the turquoise is 2 - 1 kts. In short, these are strong currents to a small boat at sea.


In either of the above movies you see the famous Gulf Stream current (complex as it is) running up the east coast of the US. (The counter part in the Western Pacific along the coast of Asia is called the Kuroshiro current.) This current system is the best known and documented of all, but we are still learning much about it from new resources. Below is Benjamin Franklin's map of the Stream from 1770. 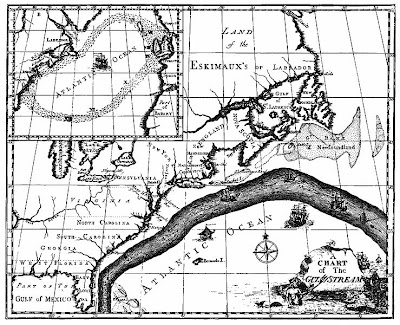 Our immediate interest in ocean currents is to assist in routing of the OARNW row across the tropical Atlantic with the hopes of getting some actual measurements of anomalous eddies along the way.  See Row Boats in Ocean Currents.

For another look at our dynamic ocean, see this Navy animation covering Gulf of Mexico and Caribbean.  Note from the dates shown how long some of these eddies and loops can persist, and how the loops can pinch off into eddies. This type of behavior has been well known to mariners for the northern Gulf Stream for many years, but we see now that this occurs many places in the oceans.


The second goal is to update our training materials on new resources for predicting ocean currents underway, which starts with recognizing that it is not as simple as once thought. We are fortunate to have some very powerful new resources.

As an example of using these data for navigation planning, look at this 144h forecast for the Atlantic and notice the small transient eddy off the coast of Dakar, western most tip of Africa at about 15N.


Here now is the type of data we can provide the boat on a daily basis to plan their navigation. This is that Dakar region, before reaching the Cape Verdes.  This is RTOFS data from NCEP. 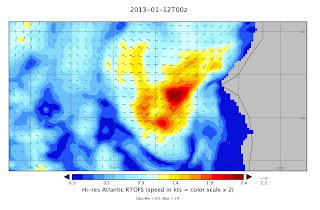 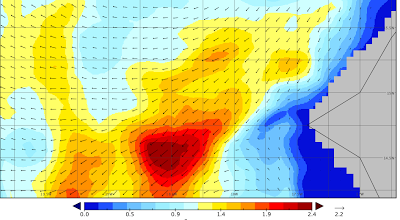 In other words had they left a couple days ago they would have hit a huge flush to the south which is not what they want.  The (NE) trades have a strong northerly component in them till well past the Cape Verdes so they have to be careful not to get pushed too far south earth in the crossing or it will be hard to maintain course in the NE wind across the ocean.

Note added Apr 27, 2013:  we have set up a more general link to current resources at www.starpath.com/currents.