A topic has come up in our weather course that deserves extra information having to do with oscillating wind shifts.  We will address this issue more specifically shortly, but for now we need to show a couple pictures and give some references.

It is a safe assumption to expect the wind to shift when a large cumulus cloud goes by, especially with relatively low base.  We do not mean squalls. We have much written in our weather book and radar book on winds near actual squalls, before and after downburst.

The point we make now is this wind behavior on a smaller scale can also be seen under fair weather cumulus. It is especially important for sailors when there is a symmetric pattern of the clouds passing over, or a sequence of them in a line... and especially important in a yacht race, in the ocean or on a large inland lake.

A general rule easy to remember is the wind will shift when one of these clouds goes by. Predicting the shift is more involved, but a related pretty good rule is if the cloud is not raining, it is pulling the wind into it. That is, biasing the ambient flow toward the cloud. But the final surface wind is a vector combination of cloud wind and ambient wind, and thus the comlication.

For now let us just give a couple references, and we will add more discussion and more references as soon as possible.

See Chapter 8, Winds near Clouds, in High Performance Sailing by Frank Bethwaite. Below is a picture from that book.

Another good reference is from a similar book by C.A. Marchaj, called Sailing Theory and Practice and a couple sample images from Part IV, Wind and Water, section (3) Local Wind. 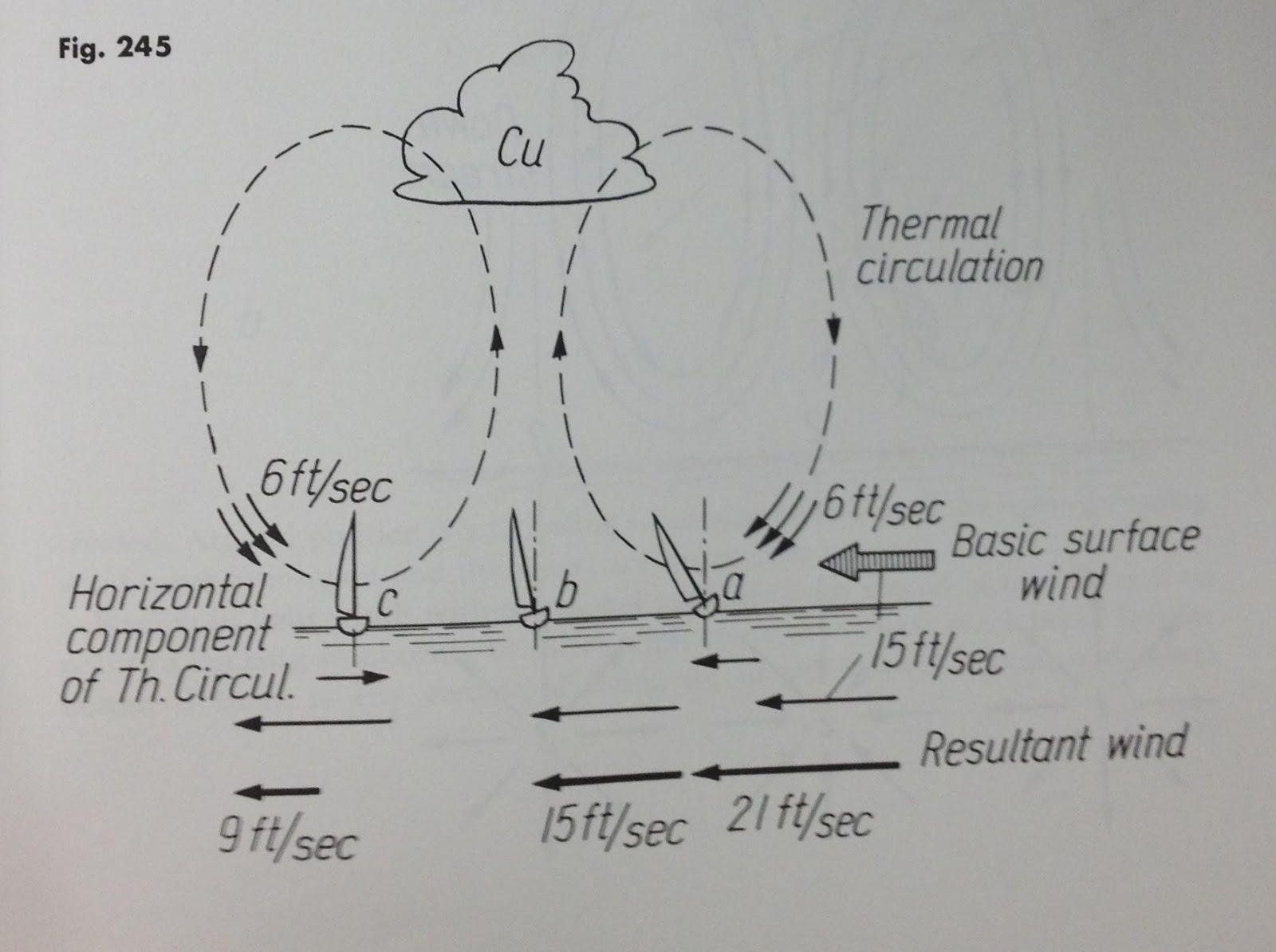 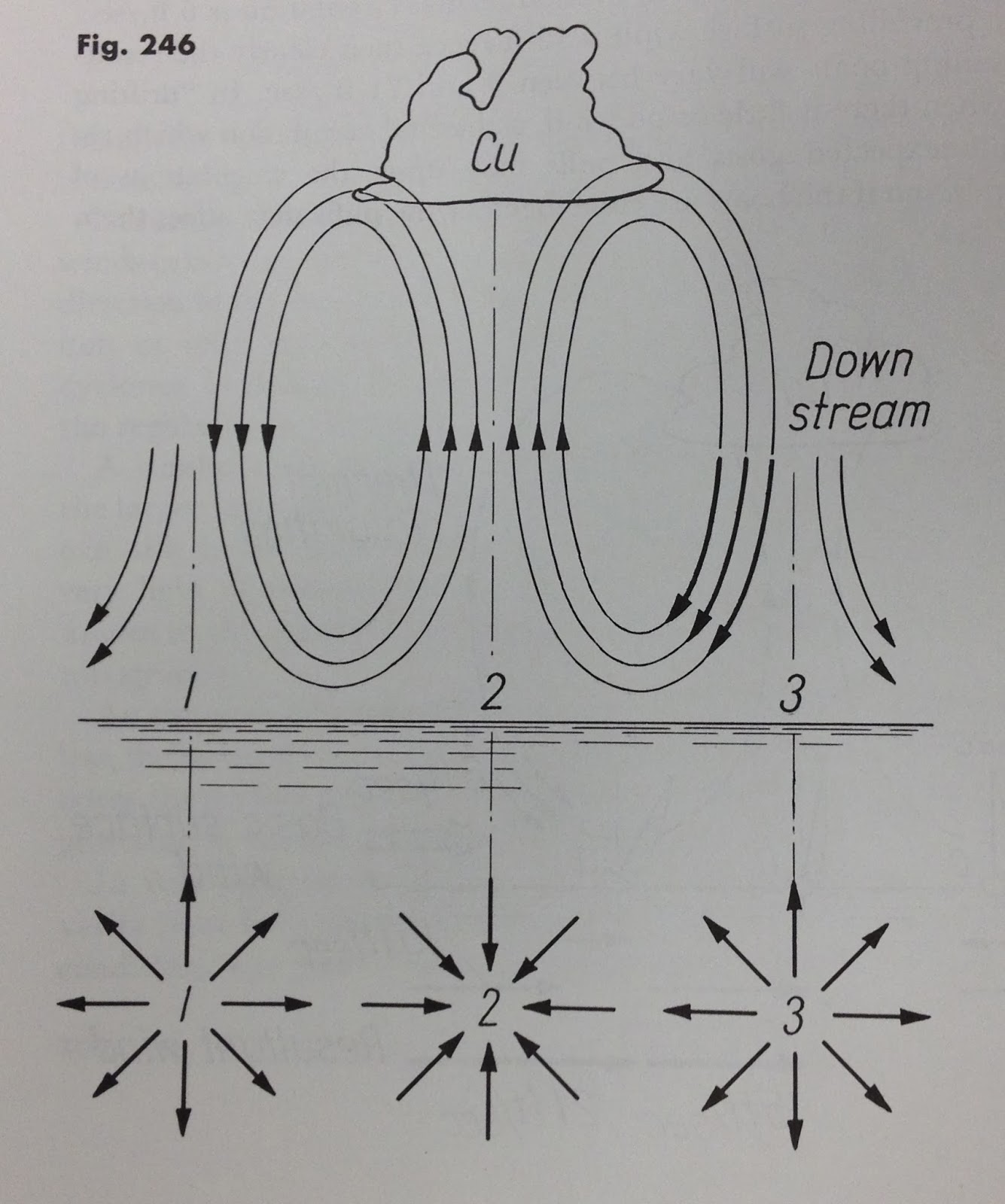 These are not books one might have turned to for weather tactics, as they are  mostly concerned with yacht design, but they are both excellent texts on many aspects of sailing, and since the authors  are engineers as well as sailors, they use real numbers, which are often missing in sailing books.

Again, I will return to this topic as time and student interest requires. But the above pictures are the hints, and then just imagine a row of these clouds going by that you have the option to choose a route though.  Somewhere in our notes we have such a picture made and we will look for it.

I have seen such patterns in the ocean and it was quite remarkable how predictable the shifts were in direct correlation to what we could see over head.

Hi David
I've been watching the Volvo Ocean race and there has been a lot of comments on how the boats have been routing through clouds, some boats have taken or lost the lead due to clouds - what strategy does the navigator employ to sail the fastest through the cloud systems?
Cheers

Please post reference to the discussions you refer to and we will look into this.... or just cut and paste the key discussion. It is a broad subject and it would be best to focus on and try to understand specific cases. thanks.

Hi David
Daily discussion on the Volvo Ocean Race regarding clouds; appears to be a significant contributor to those boats both losing or gaining ground to the leaders.http://www.volvooceanrace.com/en/watchlog.html
Extract from the watchlog today "The game at the head of the fleet is pretty close. The teams have been playing the clouds, trying to sail the edges and not getting caught in the middle.". Can you share any insight into what the navigators are looking for/how they are routing their boats to take advantage of the clouds?

sorry to have missed this reply. Not sure what they were doing, but i have seen cases of rows of clouds that we crossed under diagonally, and one could predict the shifts at the edges. If you draw rows of the cloud wind patterns shown above it think it becomes clear. I will make the sketch if this question comes up again... and i will watch closer for the comments!