What we call the Starpath 50-90 Rule  can be used to predict tidal current speeds in between slack and peak flow. It is a tidal current counterpart to the Rule of Twelfths used for predicting tide height between high and low tide

A typical tidal current cycle goes from slack water to peak flow and back to slack water in some 4 to 7 hours, with the average being about 6 hours. To cover this variation, we divide the time interval from slack to peak into three equal time intervals, as shown in the figure. On a world average, the intervals would be about 1 hour each, but using thirds makes it more universal.

Thus the Rule is the current rises from slack to 50% of its peak speed in the first third, then to 90% in the second third, and finally to its peak in the last third. It is a way to approximate current speed at intermediate times for typical reversing tidal currents. The US Power Squadron has adopted this rule and offers work forms for applying it.

There are tables and diagrams in the NOAA Current Tables for figuring the intermediate speeds, but this rule is easier to remember and apply.  Strong currents in very constricted passes can rise and fall more quickly than this (called a hydraulic head). Such currents are usually noted in the current tables with a special intermediate speed table. 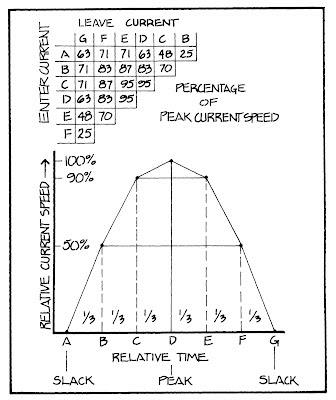 Not all, nor even most, cycles are symmetric like this, nor are they all 6 hours long, but this is the average, and the diagram can be used in halves for any time period using the third interval notation for the times. You can imagine two of these side by side, one flipped over for the other direction. The
peak values and time scales are likely different for successive cycles.