A recent article in the Proceedings of the Royal Society of London addressed the issue of the use of calcite as a Viking Sunstone. The authors mentioned Leif Karlsen, but apparently were not aware of the full extent of his work on this subject, nor that he had demonstrated this very thoroughly many years earlier. The response below is adapted from the  follow up note on this subject published by the Society. 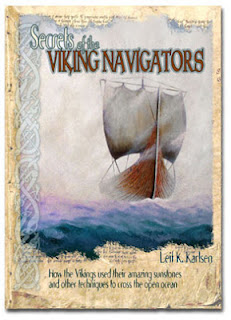 Leif's work is described in Secrets of the Viking Navigators.

Comment on
‘A depolarizer as a possible precise sunstone for Viking navigation by polarized skylight’
by
DAVID BURCH
Starpath School of Navigation, Seattle, WA, USA

Abstract: Attention is drawn to the related work of Leif Karlsen.

A main conclusion of this work by Robars et al. is that a piece of Iceland spar (optical calcite) can be used in a simple manner to ﬁnd the direction to the Sun using polarized light, even when the Sun is obscured by clouds or just below the horizon, which supports the possible role of the renowned sunstones discussed in Viking Sagas. They propose a method of using an opaque spot on the incoming face of the crystal as a means of detecting the proper orientation of the crystal when aligned with the azimuth of the Sun. They also point out that a recent discovery of a calcite crystal in an Elizabethan shipwreck near Alderney in the Channel Islands might have been used for navigation in a similar manner.

I ﬁrst express my appreciation that this line of research and analysis has been brought to the attention of the scientiﬁc community and, indeed, to the public at large, as their article received much attention in the popular media, worldwide, as would most news related to Vikings.

I wish to point out that the authors may have overlooked the signiﬁcance of the pioneering work on this subject by the late Leif Karlsen. Although Karlsen worked on this subject extensively for the last 20 years of his life, and his work was well known among those specializing in Viking navigation or special uses of crystals, his work was not published in standard scientiﬁc journals. His main report of this work is in his book Secrets of the Viking navigators—How the Vikings used their amazing sunstones and other techniques to cross the open ocean (Karlsen 2003) and later in the Navigators Newsletter, quarterly publication of the Navigation Foundation (Karlsen 2006). It was also reported in my book Emergency Navigation (Burch 2008).

Karlsen’s book is in an unusual format, which could account for the oversight. In part 1, Karlsen presents a ﬁctional account (on the basis of his extensive study of the Sagas) of a typical Viking voyage, including a narrative on navigation instruction to a new navigator. In this format, he presents (i.e. p. 26) his concept of the practical applications and use of the sunstone. In part 2, he describes what he learned to be the key steps to precise, reproducible results, with a summary that the Sun’s direction (in good conditions with a good crystal) could be obtained to a precision of one degree. Only at the end of the book in the appendix does he discuss speciﬁc results with sunstones and his own studies.

His discovery, years earlier, of how to make the measurements using what Ropars et al. call an ‘opaque spot on the entrance surface’ is the key to the Karlsen measurements. Karlsen used a 3-mm square piece of opaque plastic electrical insulating tape. (Vikings might have used a drop of pine tar, in common use in boat building.) He also developed a simple apparatus for achieving precise bearings by mounting the crystal over a mirror, all of which is mounted to an azimuth ring on ball bearings, with sighting vanes at the two ends of the crystal. His original instrument has been on display in the Icelandic Room of the Nordic Heritage Museum in Seattle since 1998. Vikings would not have had access to mirrors or compasses to aid the measurement, but would have looked up to the sky through the crystal, as mentioned in one of the Viking Sagas.

Much of his original data are still available. In short, he used his apparatus to locate a point on the horizon that coincided with the direction of the Sun at a speciﬁc time as he determined it with his sunstone. Then he would use a precision compass to measure the bearing to that point and then compute the Sun’s bearing at that time from the Nautical Almanac and compare them. The key point in this process is the compass bearing, which must be done carefully and with conﬁrmed lack of external inﬂuence. As a ship’s ofﬁcer for 40 years, he was well aware of accurate compass work and made all appropriate checks. The best of these data are for very low Sun positions or just below the horizon, and for these the average he reported was about ±1◦.

I would stress, however, that it is not his reported accuracy itself that highlights his work, but rather his clear proof that his method was a viable one for practical use. He travelled throughout Scandinavia and the USA to demonstrate his method to Viking experts, mineralogists and museum curators. He even demonstrated the method underway on Viking replica vessels, on typical Viking voyage routes, and he received much acclaim for this work.

Though not the method he used, for more casual measurements using a clear crystal, a reproducible direction of ±10◦ or so is easily demonstrated by looking up through the crystal using the crystal shape for orientation. This level of accuracy would be valuable to primitive or emergency navigation.

I believe that the sole reference to Karlsen’s work in the cited paper that reads ‘... as earlier qualitatively observed (Karlsen 2003; p. 10)’, is not representative of the extensive, careful work that Karlsen accomplished over many years, which was subsequently veriﬁed by several independent observers, and thus I wish to add this note to their publication.

Further to Leif Karlsen’s contribution, I would add that the reference made in 2011 by Ropars et al. (2011) to the recent Albernady discovery was actually reported for the ﬁrst time in Leif Karlsen’s book. The discovery came coincidentally at the very time of the ﬁnal preparation of his book in 2002, but more to the point, it was Karlsen who put the pieces together to ﬁrst conclude that this particular discovered crystal might have been a sunstone used for navigation. Karlsen’s book includes a photograph of the discovered crystal and the diver who found it.

For completeness, I note that Karlsen was not the ﬁrst to propose a black-spot method for calcite. Ramskou (1969) describes the method for calcite in 1969 (using a side of the crystal for reference), but did not report measurements for calcite at that time. He did report results for cordierite (iolite), which were made from a DC-8 aircraft, presumably using a different method suitable to iolite.

I stress that this note addresses only the referencing of the black-spot method in the Ropars et al. paper, not their hole-in-screen or Haidinger-brush methods.

Karlsen, L. K. 2003 Secrets of the Viking navigators: how the Vikings used their amazing sunstones and other techniques to cross the open ocean. Seattle, WA: Starpath Publications.

The original of this comment and referenced documents can be found at the Proceedings of the Royal Society.
Posted by David Burch at 9:32 AM