"Point Four Four per Floor" –– QFE to QNH to QFF

Several years ago we developed a jingle for making elevation corrections to barometer readings for quick conversions from station pressure measured at some elevation to sea level pressure needed for weather work.

It goes "Point four four per floor," which is intended to remind us the that pressure drops 0.44 mb for every 12 ft we rise above sea level––we are calling 12 ft a floor, which is more or less right for buildings with multiple floors. Needless to say, we chose the word because it rhymes, not because it matches some architectural standard.

This jingle will serve many needs we have in this department.

For example (using info from an earlier note):

This jingle will almost always work for computations like that one, even on up to several hundreds of feet, over a broad temperature range.  But this jingle is definitely an approximation, and it is time to address this more specifically so we know what affects the accuracy and how to compensate for variances.

It is an approximation for two main reasons. One, the density of the air decreases with increasing elevation, so it cannot be 0.44 forever as we go up.  Also the conversion of a pressure measured at a high elevation to the best equivalent value at sea level pressure (SLP) at that location and time depends on the outside air temperature as well as the elevation. Worse than that, it also depends on other properties of the atmosphere at the moment and it even depends on the local geography, but the main factor beyond elevation is the air temperature.

The conversion dependence on these factors is a complex one, and even meteorologists from different countries do not agree on the best way to compute it. The best rules for the highlands of Norway are not the same as the best rules for highlands of New Mexico or Colorado.  For an introduction to the conversion process and the factors involved, see Appendix A3, Reducing Station Pressure to Sea Level Pressure in The Barometer Handbook. More details on the issues and challenges are presented in the WMO document CIMO/ET-Stand-1/Doc. 10, Pressure Reduction Formula, Nov, 2012.

To begin, the jingle is an approximation to an approximation, and to clarify that thought we need to use the specific terms for the types of pressures we are dealing with. The short definitions are: QFE = station pressure, QNH = sea level pressure figured from elevation alone (called altimeter in aviation weather),  and QFF = best value of the equivalent sea level pressure taking all known factors into account.

There is a unique and unambiguous way to find QNH from QFE. We assume that QFE decreases with increasing elevation exactly like the pressure drops with elevation in the International Standard Atmosphere (ISA). This average atmosphere was developed originally by aircraft designers who needed some standard to work with. There are tables and formulas online that compute the pressure of the ISA as a function of altitude.  A slick online computer is at www.digitaldutch.com/atmoscalc, which even lets you create a printable table to your design.

Essentially all electronic barometers on the market that offer the option to display SLP as a function of elevation are presenting QNH and they are using the ISA formulation. Indeed, most of the time we hear or see the phrase sea level pressure the implication is that the elevation dependance is this simple one based on the ISA. If air temperature is not mentioned in the same sentence, then it has to be that one.

And the results (ie QNH) are actually very close in many applications, compared to the best we could do (QFF) if we made a lot of corrections. We have to go to extenuating conditions (high elevations or unseasonal temperatures) to see notable difference, or we have to care for a precision that may be difficult to justify.

So our jingle of point four four per floor is just an approximation of how the ISA pressure drops with altitude over the lower layer of atmosphere, which as noted is itself an approximation of how QFF might drop with elevation. Note I say, "might drop" with elevation.  Throw a big temperature inversion in there and even the best computers will have trouble coming up with a good sea level pressure.

Table below shows how the jingle falls off in accuracy as the elevation increases. Also shown are the ISA air temperatures as a function of elevation. As you go up in the atmosphere, the pressure and the temperature drop.

So the first thing we see is our jingle is good up to 750 ft, and still ok within a couple percent to 1500 ft.

But the underlying assumption of using this conversion (QFE to QNH as an approximation of QFF) assumes the temperature of the air as a function of elevation matches that of the ISA––in some sense.

This brings up an interesting distinction in language that is related to our problem here. The ISA describes the properties of the air as a function of altitude, which is assumed to be distance up in the air, whereas we are dealing with our elevation, which means a height above sea level while still on land. A cloud is at some altitude; a hiker is at some elevation.

In short, we have little reason to think that the air temperature at our elevation is what it would be if there were no land below us.  We know the weight of the air above us, that is QFE which we measured, so a determination of QFF is tied to making some estimate the average temperature of the imaginary air column below us, so we can figure the weight of that, which added to QFE is QFF.

For practical corrections at sea we have some advantage.  First we are on a uniformly flat surface (water or ice), as opposed to in a mountain range, and second we are not going to be very high.  Thus the NWS Observing Handbook No.1 can include a table for navigators to use to make the correction for elevation and temperature in one step.  Clearly there has to be some empirical nature to the result, because there is not agreed upon theory, and I would guess that in principle the correction depends on the pressure as well, but the main point is everyone uses the same corrections, and that is what the models need for consistency.  Below is the NWS table with some inserts added. 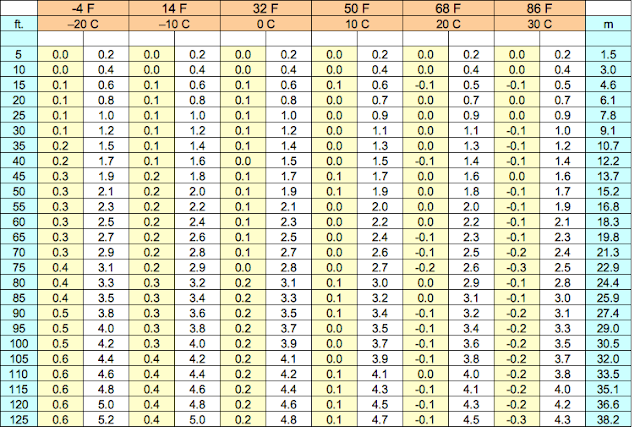 The white background are the actual numbers from the NWS Handbook Table. Thus if the elevation is 110 ft and the outside air temp is 86º F, the correction to get from QFE to QFF would be + 3.8 mb. The yellow number beside it means that of this 3.8, 0.2 is due to the temperature, which caused a lower than normal correction.  Likewise, if the air temp had been a chilly 4º F, the correction at 110 ft would be 4.6 mb, of which 0.6 mb was due to the air temp, and this caused a higher than normal correction.

These yellow numbers come from just computing what the elevation correction alone would be using our 0.44 jingle, and then subtracting it.  In a sense, the yellow numbers reflect the difference between QNH and QFF.  We see from this that air temperature is not a big factor for low elevations, even with rather extreme temperatures, but since we do have this good approximation, we are better off using it than not.

At higher elevations, however, these corrections are quite large. We will post here some results on that as soon as completed.  These we have to compute.

Our  next step then––the truth meter––will be to compare our results with the differences seen in metar reports for various elevations and temperatures around the county.