In the true atmosphere, however, the equivalent sea level pressure measured at a location that is well above sea level is more complex than a simple elevation correction can account for. The more realistic value of sea level pressure, called QFF, is a bit of a tricky concept, in that we wish to know what the pressure would be at sea level measured from the top of a mountain, as if the mountain were not really there.

QFF is the pressure needed by the National Weather Service so they can make maps of the sea level isobars that spread across a landscape that varies in elevation from place to place.  The measured pressures across this landscape are crucial to seeding the numerical weather prediction models that in turn are used to forecast the weather over the region.

Since pressure is the weight of the atmosphere above us, and because cold air weighs more then warm air, we can see that air temperature must be a factor in this correction as well as the elevation. The simple conversions that use only elevation are based on the International Standard Atmosphere, which provides a specific formula for how pressure drops with elevation. It also assumes that the temperature of the air is also following along with that of a standard atmosphere, namely starting at 15º C and dropping at a rate of 0.0065º C per meter.

This turns out to be a reasonable approximation, provided the air temperature at the elevation at which you measure the pressure is about what it would be in the standard atmosphere for that elevation. Thus if I am at 300 m elevation (984 ft) the correction to my station pressure reading (QFE) to get to QNH would be + 35.5 mb, based on elevation alone.  But this correction assumes the outside air temperature where I am is 15º - 0.0065º x 300 = 13.1º C (55.5º F).  Needless to say, all locations in the world that are at 984 ft elevation are not at 55.5º F at all times.

The first ever insights into this issue can be traced to the American meteorologist William Ferrel in a paper from the mid 1800s. He worked at the US Signal Corps at the time (forerunner of the NWS), and his pioneering paper on this subject appeared in the same report that included a paper on the interpretation of smoke signals used by the Apache Chief Geronimo.

The required corrections for temperature can be notable for elevations above 1000 ft, even at modest temperature ranges.  Notable in the sense of the rate that pressure changes across a typical weather pattern, which is depicted on weather maps with isobars spaced 4-mb apart. Thus a 1-mb discrepancy could shift an isobar by many hundreds of miles in some cases.

Likewise in the winter, when the same pressure was measured in outside air temperature averaging 32º F, then the correction would be +1.2 mb for a QFF of 1024.0. 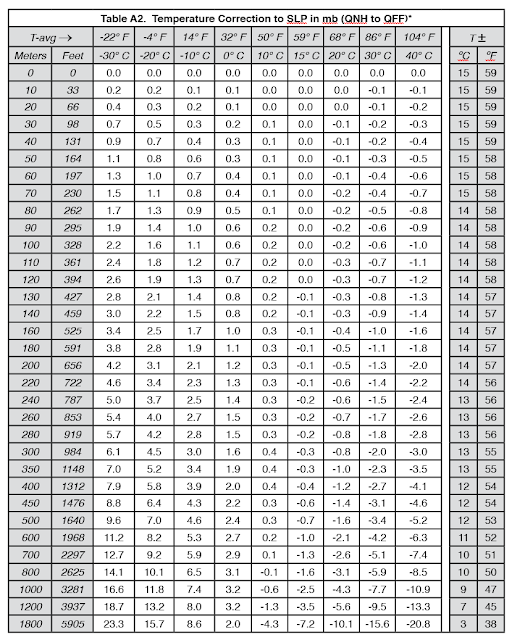 This 12-hr time average is not an obvious choice. It is also not the result of a mathematical theory, but we can expect that some average is called for. We know the virtual temperature of this virtual air column affects the pressure, and it is reasonable to assume that the the pressure at the base of this column cannot respond instantly to a change in temperature at the top, so we are led to averaging over some time period to reach equilibrium. In other words, the air temperature at the moment is not what we should use to project this pressure down to the sea level, but rather some average of what it has been in the recent past.

Ferrel originally tried a 24-hr average, but found that was too long. The daily changes in air temperature with the rising and setting of the sun distorted the underlying weather pattern pressures. He found that a 12-hour average was the best compromise in that it provided the most systematic results when compared with data from neighboring locations. Recall the main goal of this endeavor is to develop a systematic measure of the sea level pressure pattern that is as independent of local terrain as possible. And he was pretty much right. Ferrel's approach to air temperature has not improved much over the intervening 150 years!

Since this air temperature averaging seems at first a rather arbitrary procedure, we have looked into this in more detail. One way to test Table A2 using present air temp versus using the 12-hr average air temp is to compare the corrections we get with those generated by the AWOS (automated weather observing system) computers located at airports around the country. These computer programs use the most sophisticated analysis available to convert QNH to QFF. They use the latest models for virtual temperature as well as the humidity and even local fudge factors developed over the years,  stemming from what Ferrel originally called Plateau Corrections.

The AWOS generate METARS (a long French phrase meaning airport weather), that include both QNH and QFF along with the air temperature, dew point and other data of interest to aviators. A typical METAR looks like the following. The top line is the METAR code, below it is the translation of the code. The one below was just pulled offline at this writing, along with one from 12h earlier.

Unfortunately, we do not have very fine steps in the table shown (we can add more later), so we have something like a triple interpolation to do (ie find the numbers in the blue fields based on the white ones):

There is an interpolator at  www.starpath.com/calc (sample below), and the free Windows program Celestial Tools by Stan Klein includes such a function, among others valuable to the navigator.

So we see here one data point:  the best AWOS correction was -3.3, and we got -5.8 with present air temp, but got -2.9 with the average air temp.  Still not exactly right, but a huge improvement from the average – it might even have been closer with a computation rather than interpolation.

That example shows the approach we are taking to study this effect.  But not just one case like this but very many. With high and low elevations, hot and cold temperatures.  This example, by the way, is a very high station, and we still got pretty close. Below 2000 ft the table using the right temperature is very good.

Below are a few selected samples of data so far that support very clearly the need for the average temperature and not the current temperature.  They are comparisons done just like the one above but for multiple test cases for different locations.  Needless to say, these are all typical, we have not selected out particular sets, nor omitted any data points, and we have many more examples that behave the same way.

The red lines represent the errors in our corrections using T, and the blue lines are the errors using the T average over past 12h.  Even this rough study is remarkable evidence that we must use the average temperature over the past 12h when correcting QNH to get QFF. 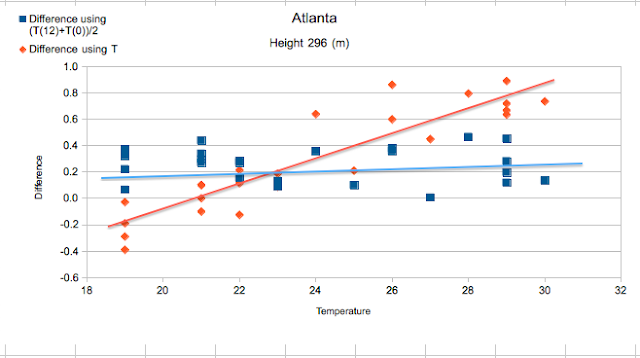 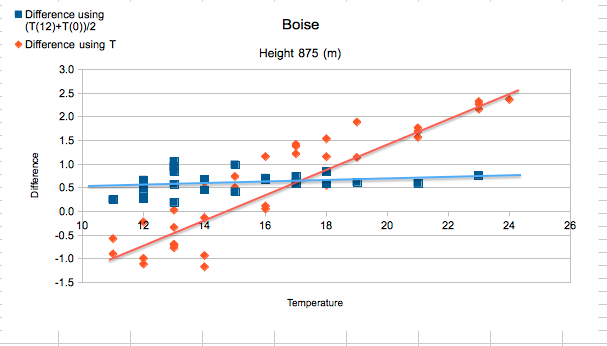 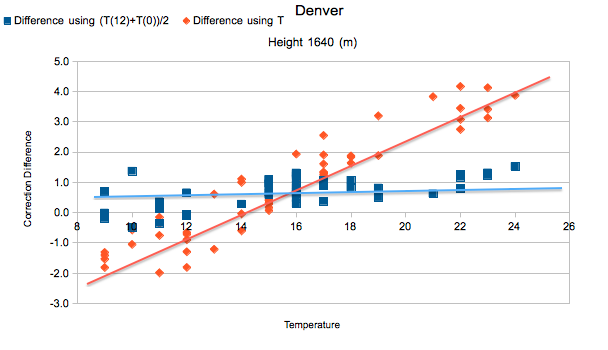 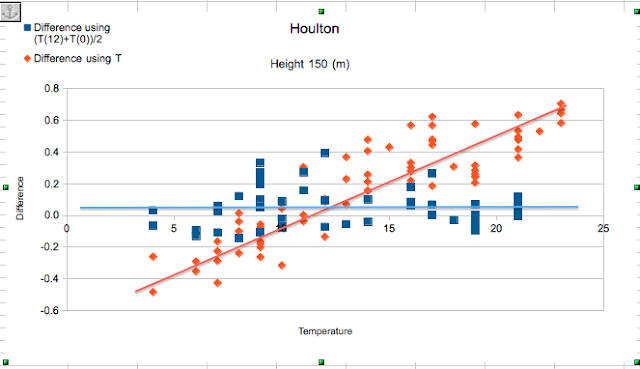 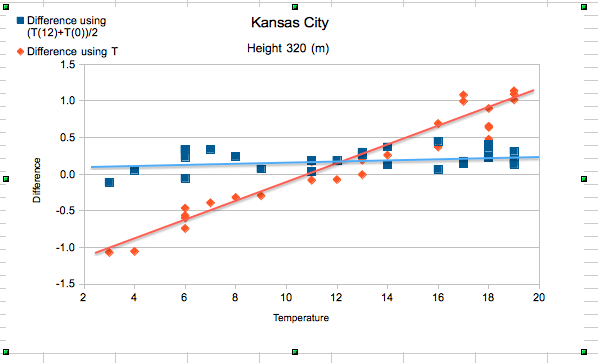 Besides the apparently obvious need for the temperature average, we also see that there are still large discrepancies with the AWOS data for SLP, even at the same average air temp, at the same locations. We can estimate the overall uncertainty in this approach as the spread of values about the blue line. We see no evidence that the need for average is correlated with temperature, but the success of the solution does vary with elevation, which is not a surprise.  This method works pretty well for stations below 2000 ft or so (< 1 mb) but for the very high stations we are still hovering around ± about 1 mb or so.  All and all not bad, but a seemingly large scatter.

The summary is, if you want to compare your pressure with what would be expected at sea level, you must take the recent history of the air temperature into account, and the higher you are, the more important it is.

We are in the process of automating the data collection and analysis in hopes of learning more of the inherent reliability of such conversions to SLP as well as an attempt to develop some empirical modifications to table A2 to account for the discrepancies and scatter. We would like to end up with the blue line centered on 0.0 for all elevations, and to have a better feel for what variations about it are expected.  We do have all of the dew point data, so a small correction for humidity can also be added, but the problem with that is end users will not have such data, so we want to learn how well we can do without it.

A very special thanks to Albert Brown of Garfield HS in Seattle, who carried out the data searches and analysis.

[Some of the formalism that goes into the AWOS computations of SLP along with historical notes on  Wm. Ferrel's role in the process are covered in the Appendix to The Barometer Handbook.]