This name for the process of listing or reciting the points of a compass card arose after 1851 and before 1911. In the 1851 Bowditch “boxing” was a verb meaning to back wind the jib. In 1911 edition it was used as is done today. On the other hand, the size and concept of a compass point (11.25º) dates to the earliest navigation records from the 16th century.


The call for this note came from reading the 1851 edition of Bowditch; in particular the log of his voyage from Boston to Maderia that he made in 1836. It is a fascinating document that reminds us of many of the fundamentals of marine navigation. One of which is the procedure of taking a departure on ocean voyages. Taking a departure means simply recording the bearing to the last land you see as it slips out of sight, and adding to this an estimate of its distance off. We bring this important concept back into practice in our textbook Celestial Navigation: A Complete Home-study Course.

Modern navigators have mostly forgotten about this step in their navigation routine, and to the extent that happens we lose one more of the good procedures established over many years by our seafaring forefathers. Even in the age of GPS, we should take and record our departure. As we sail out of sight of land, it is in a sense the last thing we know for sure!

The first thing you run across in the Boston to Maderia log book is “At 8 PM, Cape Cod Light-house bore S by E 3/4 E, distant 14 miles; from which I take my departure.”

To a modern reader, the first job is to figure out what bearing this really is. He is speaking in terms of compass points. There is a point on the compass called “South by East,” and from this point you turn three quarters of a point to the east, and you are facing the lighthouse.

The general procedure of converting compass points to azimuthal degrees is called boxing the compass. There are 32 points in a circle, thus each point is 11.25°. Easy enough it would seem, but nevertheless, boxing the compass is no simple matter. And it was at this point I realized that this question comes up to modern navigators more often than we might guess—usually in the context of reading an older book, but sometimes part of navigation tests that choose to hang on to some older traditions. Not to mention that compass points are still marked on compass roses of most US charts and magnetic compass cards, so an instructor is obligated to give some level of explanation. Compass points are also referred to in the Navigation Rules in that, for example, sidelights show from straight ahead to two points abaft of the beam.

Compass points date from our earliest record of navigation. They are shown, for example, in the famous John Davis work from the late 1500’s. Figure 1 shows this and also gives a hint of where the term "compass rose" might have come from. Though not named as points, modern compasses often mark the cardinal and inter cardinal points in the same style as used on older compasses.

But when it comes to looking up how to box a compass we quickly learned that this is not easy to find. It has long been dropped from modern textbooks, and if you go back to the days when it was commonly used for bearings and courses (1800’s) you find it was then presumed a known basic, and so not covered there as well. Thus the best source is a text from early 1900s.

Referring to the figure of the annotated Kelvin compass card (Figure 2), we see that each point is named relative to the nearest cardinal or inter-cardinal point. Thus the name of the third point to the right of north is NE by N and not NNE by S. The word “by” means the point next to the reference point. It is sometimes abbreviated with an “x” such as NE x N.


The finest divisions used are quarter points (11.25/4 = 2.8125°).  The labeling of the quarter points is where all the fun begins. Fractional points are referred to the nearest whole point, but which one do you use. For example, the bearing one quarter point N of NE could be called NE 1/4 N or NE x N 3/4 S. Only one is right, however.

The full compass is shown the table below. There is some rough analogy here with the use of roman numerals, which proceed upward for a period then back one then upward again: i, ii, iii, iv, V, vi, vii, viii, ix, X, xi, xii etc. Thus we count up to a reference point and the adjacent points to it are referenced to it and not in an ongoing sequence. But we all recognize this as a convoluted way to count. Movie makers even put the date in this format so we can’t figure it out as it flashes by. Could it be the early mariners used this convoluted system to protect the captain from mutiny by untrained crew in the sense that it is said they did with the practice of celestial navigation? 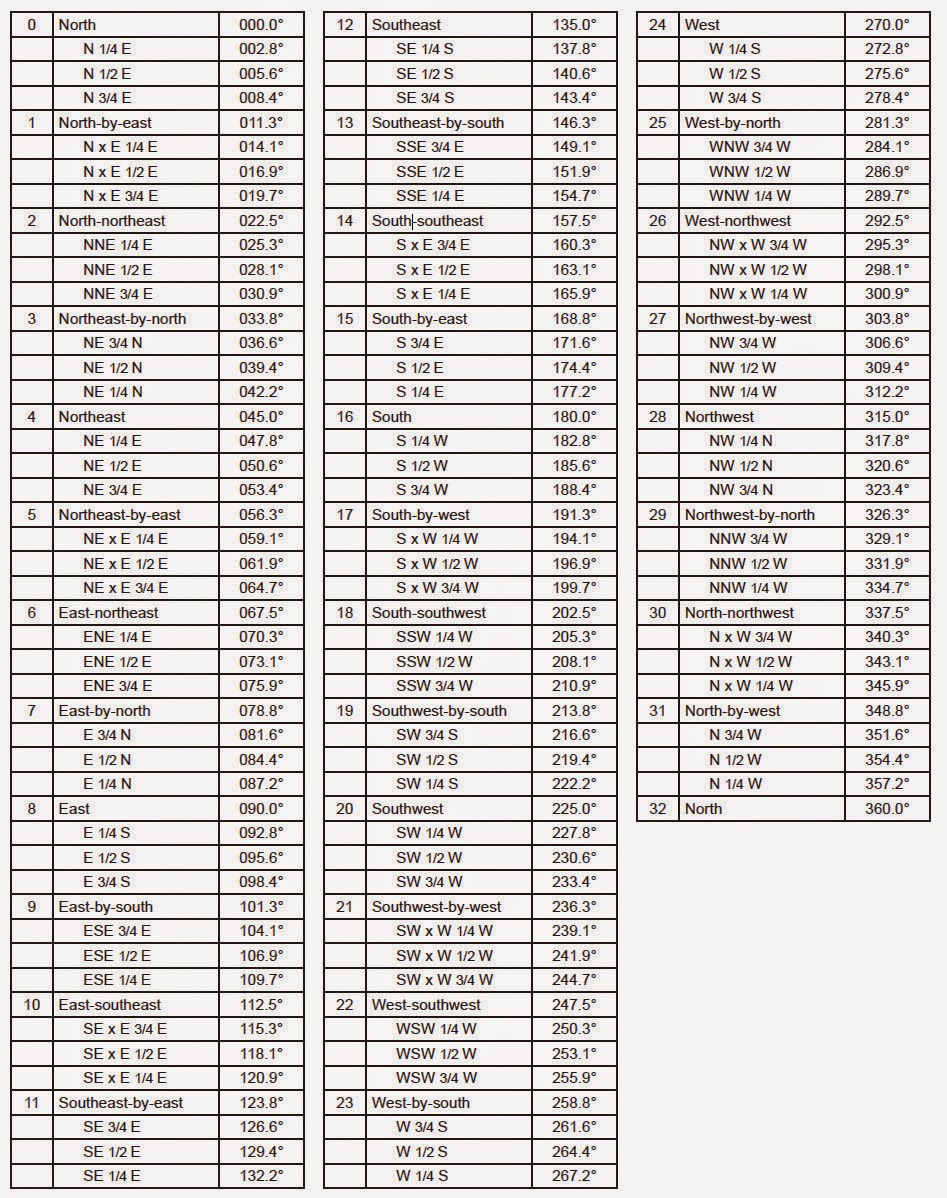 For the above, and any other Blogger image, you can right click, choose open in another tab, then you can often expand for better view. Not always, but often. This one can be expanded.

The 2017 Bowditch has a table in Appendix C that lists the compass points. A sample is below. 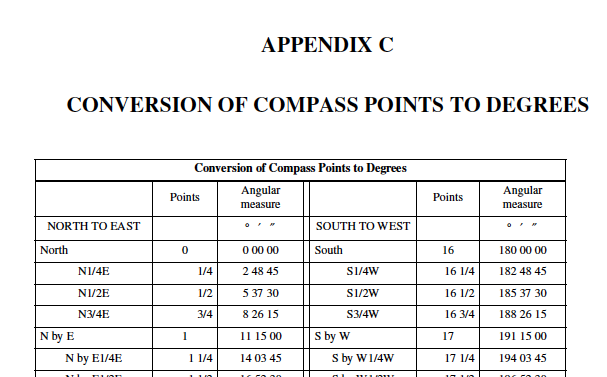 I teach just the 32 points.

I learned 32 points from a novel. Thank you for the further ones - didn't realize one could get 128 of 'em! I was looking to see who it used to be who'd be required to learn them; so far, a sea cadet to become an able bodied seaman, and someone who had to in order to become a deck hand. (I learned 'em just for fun, as something to know when reading books.)