Mackerel sky and mare’s tails make tall ships set low sails.  That is a well known evaluation of a rather extended cloud sequence. It does not apply to the sighting of either cloud type on its own—as we show here very clearly, though not the topic at hand.

In other words that is a very specialized seat of the pants forecast tool that must be interpreted carefully and only as part of an ongoing sequence of cloud changes.

On the other hand, mare’s tails or fall streaks (cirrus uncinus ) do often tell us something else that can indeed be more universally valuable. They can tell us the direction of the winds aloft, meaning up at some 18,000 ft. We care about this direction as these are the winds that pull the surface weather systems across the globe. Thus if the winds aloft are from the SW, then we expect storms to approach from the SW, and with that information and the Buys-Ballot law we can watch the surface winds shift and from these two pieces of information know where the storm will pass relative to us.

The main reference for looking into the details of that analysis (sometimes called the cross winds rule) please see Modern Marine Weather. The section is shipboard forecasting without radio contact or any other form of official forecasts… all on your own.

This wind direction can also be used as a rough steering guide without a compass available or other natural aids, many of which are actually better than this one.  For that approach see Emergency Navigation. These winds are more valuable than surface winds as they might persist in direction for several days in a row, even while surface winds are going around the clock.

We have devoted much discussion of this over the years, but yesterday had a dynamic example hit suddenly with all info needed to evaluate it, the key one being an iPhone!  Namely on a walk through Discovery Park in Seattle, which from the high plain it is, offers a broad view of the sky, much as one might get offshore. Also with a shadow clearly in place we can compute the directions we need… not to mention we were on a path that could be identified on Google Earth, so we get as good as we might on land of the cloud directions.

Needless to say, on a boat at sea you would do things relative to the steering compass. But the goal of this write up is to show how you might practice this on land when you get the chance.  The key point to keep in mind is these cloud patterns are transient.  The dramatic sky full of fall streaks we saw were pretty much all gone but an isolated patch in a matter of 20 minutes or so.

Going back to our first old saying, this would be “clear sky and mare’s tails, makes tall ships do whatever they were doing.”  No info here on changing weather… which in fact did not change at all.

And we see here the key issue of this evaluation of wind direction. We have to work with a linear perspective into some form of a vanishing point on the horizon which we assume is the wind direction. Just looking at one patch of clouds in one direction might not do the job.

So here are some pictures followed by the what was learned… and ways to improve it…. and i have to admit at this point that i hope it works out to be right!  I do not know the answer at this stage.  In any event it will be a good exercise, as it will show limits on the methods.  The principle is a sound one, so any big discrepancy will have to be sorted out.


We start with a few pictures of the sky.

The view above is misleading as it looks like the clouds are crossing the shadow line and trail at a steeper angle than one gets from seeing the full perspective. The shadow line is about 10º to the left (north) of the path line down by the tree on the right. The best bet at this point would be put a vertical stick in the ground and get its shadow.  Compiled here is just what was thought of at the moment. A planned measurement would be better—but we have to essentially plan for the unexpected as these are transient views. The panorama pic is the best thing to remember when a case presents itself.  Below we see shadow was 107 T and path near tree 114 T. So we see here the tricky part in interpreting a single view photo.

It is frankly difficult to tell from what we have here, but my noted conclusion was the winds aloft direction was about 30º to the left of the path, the direction of which we can determine several ways.

Here we see the bearing to the sun was 287, so the shadow pointed toward 107 T.  We can also get this information from www.starpath.com/usno using time and location.

So from my records of the vanishing point being some 20º left of the shadow, we get winds aloft flowing toward 087, but this has to be clearly some ± 20º at least.  (My actual records had 30 left of the path, and later adjusted it to left of the shadow, thinking that would be a more accurate reference, but it turned out we could find the path direction easily. See later satellite image of the park.) 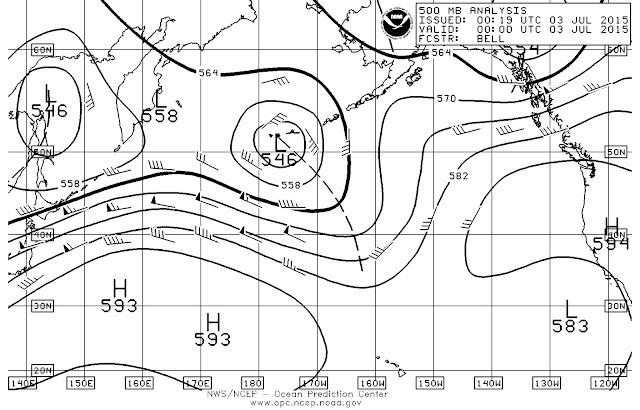 We do not have a clean example here, as the main flow was north of us. But we do see that the trend from 00z to 12z was toward more westerly, that is toward 090, and there is a trend to strengthen, that is, the contour lines (these are isohypses not isobars on this type of map—that is, contours that mark the same altitude of the 500 mb surface) are more parallel and closer over the Puget Sound. As a rule we do need pretty firm winds aloft to see these nice fall streaks.

So that is the exercise. In this case we are within 30º accuracy for sure (numerically closer, but that must be large part luck),  which is more than needed to make the weather forecasting judgements of which way the storms are approaching.  More generally we are just trying to distinguish between: from the SW, from the W, or from the NW, and this exercise told us from the West.  In rare cases, the winds aloft can distort enough to be more northerly or southerly, but not often. For example, had we done this at about 150W, we would have seen very different results, and learned that we had an unusual case of the storms coming up from the S-SW... that would be what is called around here the Pineapple Express, which has brought the very worst storms to the NW over the years.

Below is the Google Earth image of the location to show how you can use that as well to check for reference directions without relying on celestial navigation.

Just thought of something else—illustrating the live nature of this write up.  There are phenomenal cloud images online.  Do a Google images search for cirrius uncinus for example and find tons... after a few seconds I found the following. There are certainly better examples, but we learn a lot from just these three. 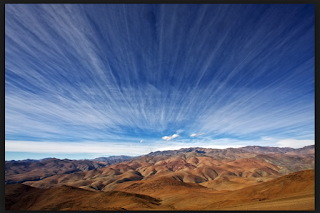 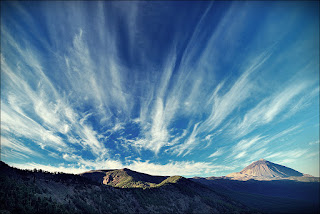 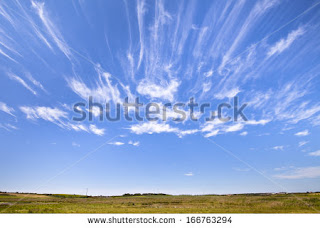 These are not strictly the same clouds we were looking at above, or rather their relation to the winds aloft was slightly different, but the principle is the same, and we get the same info, namely direction of the winds aloft that are (most likely) marking the storm track.  Without a reference line or point, however, we do not know what it was. But this would be the kind of picture that would make the analysis more precise when practicing on land.

Notice that if you draw a line directly to the vanishing point, it will appear that the ones off to the side are crossing at a steep angle, so we do need to be careful about single picture or single view interpretation of the direction.

The main thing to learn from this is, I pointed the camera in the wrong direction. I was aligning with the reference line, which left the vanishing point off to the side. It seems it would be best to point the camera or center the panorama on the vanishing point, and let the reference line or point on the horizon fall where it may.  We would get better data.... or just turn on the compass app on the phone and hope it was right (not guaranteed.... need to check how to calibrate it, usually fast and easy, and hold it very level during the measurement.... maybe include a few landmarks as well to double check).

Again, this issue does not come up at sea, which is why this is a good trick to know. At sea you spot the vanishing point, take a known correct bearing to it relative to steering compass, and you are done.  In some cases, you might even be able to turn toward it and check the bearing uncertainly by swinging the heading around about the main direction.

And even more confidence is gained by doing it a bit later. The present pattern will likely go away and then maybe later come back.  Check it again and you learn more.