These three environmental sources surveys cover key resources available to mariners who have not taken our Marine Weather Course, which covers each of these in depth, along with the background needed to use them efficiently. Our goal here is to be sure that you do not leave one of our other courses without at least knowing what the basic tools are and how to find them.

All three surveys (weather, waves, and currents) take advantage of viewing forecasts or actual data in GRIB format using dedicated GRIB viewing software or a navigation program with that functionality. A discussion of those programs and sources of GRIB formatted data are in the Weather Survey, so that one is needed to understand the Currents Survey and Waves Survey.

For US coastal waters, we have a rough starting point on waves with the statistics in Appendix B to each Coast Pilot in a section called Meteorological Data. For all US coastal waters they list the "percent frequency" of winds > 33 kts, seas > 9 ft, and visibility < 2 nmi, with the caution that these data are based on observations from vessels that may have avoided bad conditions, and therefore these are minimum numbers. They do though clearly show how these data vary month to month along the coast, which could help in choosing a voyage time.

For live data we have the occasional buoy, which has to be identified from the NDBC site. There are certainly  more buoys with waves than with currents. Here is one example: http://www.ndbc.noaa.gov/station_page.php?station=51000

We can access wave forecasts graphically in the OPC forecast maps called "wind and waves."  There is a 24h, 48h, and 96h forecasts.  See near bottom of this page for the Pacific. The 24h forecasts cover different regions than the 48h and 96h, which is the same with weather forecasts.

and this page for the Atlantic


Farther down the page they show color graphics, which are direct model outputs.


Wave maps can be received by HF radio wxfax (or direct internet download). The schedule and links to products are at at this page:

The wave maps can also requested by email via saildocs or FTPmail as explained in the Weather Survey.

Also at the bottom on the OPC page mentioned above you will see color graphics of wave forecasts from the WW3 model (Wave Watch III). They choose to show just one map (primary wave period and direction), but there are more, and you can see others at


Click WW3 to show regions available, select a region, then the model runtime, then the time span of interest. There are three parameter combinations to choose from.

Here is a good place for a reminder about sea state definitions. The word "waves" can mean anything, i.e. any one of the following specific types, or even combinations of them, which makes it obvious that if we want to be clear in our communications we should chose these words carefully.

Wind waves are those caused by the existing wind. Generally they move in the same direction as the wind, but for new wind shifts it can take half a day or more for them to get in alignment… and for a moving system they may indeed stay out of alignment to some extent.

There is always a statistical distribution of wave heights, wave periods, and wave lengths, and wave widths—meaning the horizontal extend of a wave in the direction perpendicular to the way it is moving.

Wind wave distributions are characterized by the significant wave height, defined as the average height of the highest one third of all waves. The table below shows how other stats can be tied to the SWH.  Wind wave forecasts are generally given in terms of SWH. 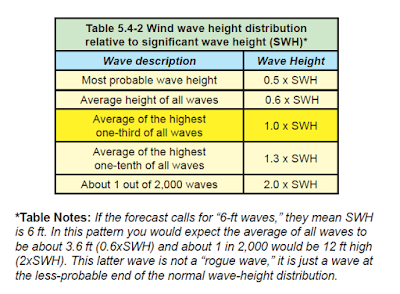 Swell waves are those caused by distant storms. They have out run the systems that created them and they proceed across the ocean. As they proceed from their source they get organized into a near constant height and length, and as they proceed the height gets lower the length gets longer.  Longer waves means longer periods, being the time peak to peak time it takes one to pass.  Average wind wave periods are some 7 seconds; swells are longer, up to twice that or more.

Combined seas means wind waves plus swells. SWH can also be applied to the combined seas.

Capillary waves, called cat’s paws or ripples, are waves on the surfaces of wind waves or swell waves. They are restored to flat by surface tension, as opposed to wind waves and swell which are diminished by gravity. These ripples reflect the direct, transient action of the wind. These do not enter into navigation, other than our using them to spot the true wind direction from their pattern on the surface of the waves below them.  (We are grateful for these little guys, because they are the ones that scatter the microwaves back to scatterometers on satellites that measure wind speed and direction, as noted briefly in the Weather Survey.)

As you look over the WW3 forecast images, you will see wind waves and swells forecasted. Check out their heights and periods across the maps to see how all this works. A look to the corresponding weather maps shows the sources of the waves.

Besides these graphic image forecasts, for ocean sailing we also have the digital wave forecasts from ocean models, which are more precise and easier to use. (Not necessarily more accurate than the graphic data, which is from the same model, but available more often than the standard map times. )

As is the case with ocean current models, noted in the Currents Survey, there are internationally several models providing sea state forecasts, but there is one dominant one, made here in the US that is the most popular for global coverage, the WW3 model. This is essentially the only one we need.

As with RTOFS current forecasts, you can get the WW3 wave forecasts from within zyGrib, LuckGrib, or OpenCPN, or request them directly by email from saildocs. Here would be a sample request to saildocs

This brings you the digital GRIB data for the parameters listed (see bellow) for the Lat-Lon window shown, for the times 06, 12, and 18z. There are many wave parameters computed by WW3. The ones available from most servers are:


Samples of the these data are shown above. WW3 is updated every 6h, and gives forecasts out to 7 days, starting at every 3h, then in larger steps. Resolution is 0.5º, but we may not need that and can ask for 1º to save air time.

For those who do not have time for our full Marine Weather Course, we have available our textbook Modern Marine Weather  and our Weather Workbook for study on your own.