We had a very pleasant surprise visit in the office today from sailing and weather expert Bruce Hedrick, during which the discussion of local squalls came up, which reminded me of an example from a couple months ago, which at the time seemed to me a peek into the future of squall forecasting.

This one occured on Sept 16, 2018,  during the J&J race from STYC. It started with a bike ride home in the afternoon noting what fine sailing weather we had as a race was going on in the Sound, off Shilshole Bay. Then once at home I saw the same fleet hit by a sudden squall, which was gone in 15 min or so.

Perhaps one of Bruce's racing column readers was sailing that race and can tell us more about what they observed. This took place between about 1:15 and 1:30 PM, on Sunday, Sept 16.

At the time I made a video to document the observation; this note is a summary of that video, which was longer than needed... too much talking!  Plus a couple new notes. The boats affected that I saw were at the location of the vessel icon in the picture below. 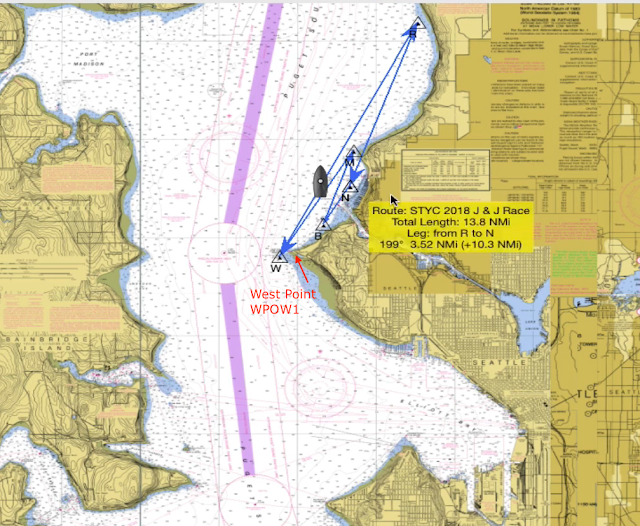 The thought that occured to me at the time was: did this squall show up in the new forecasts of simulated weather radar? These forecasts are available in the HRRR forecasts, and promise to be a key parameter for inland and coastal sailing, in that they should be able to forecast squalls in an easy to understand manner.  This parameter is also available offshore in FV3-GFS data. We discuss this parameter and how to use it in our textbook Modern Marine Weather, 3rd Ed.

Much of the HRRR data is available from third party sources beyond using direct access from NCEP, but to my knowledge the only GRIB viewer that can seamlessly download and then display this special parameter is LuckGrib, available for Mac or iPad, which we used for this study. The only nav  program I know of that will do this is Expedition (v10.9.17.1 or newer... a 10.9.18 beta).

Below we see that the wind over this part of the Sound prior to the squall was well forecsted by HRRR which we can tell by comparison with the NDBC winds from West Point Lighthouse (WPOW1), shown below... captured from the video. 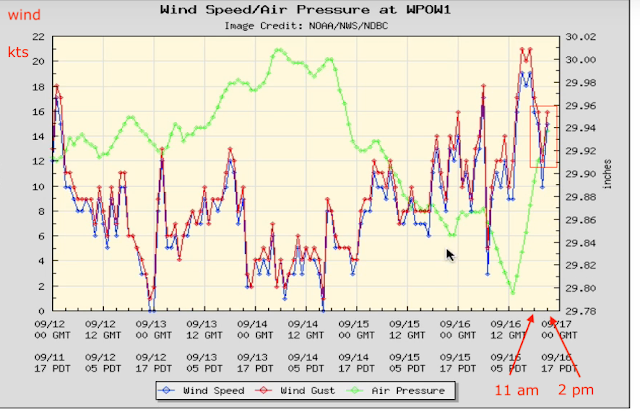 This shows the wind at the time at west point was 12 to 16 kts, and when we look at the HRRR winds at this time below... 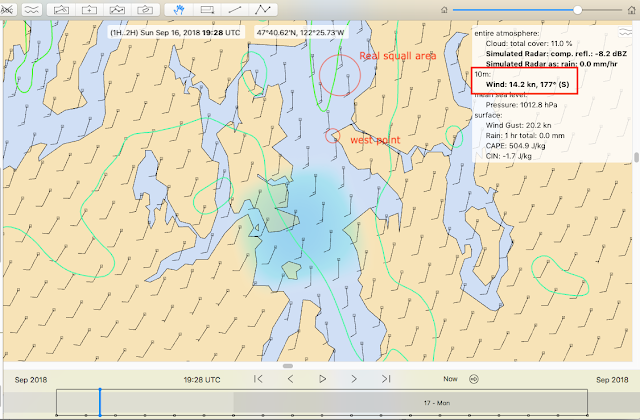 12:30 PM HRRR wind forecasts about 14 kts from the south agrees with what is seen over the area.  Then in the video we step forward slowly to see below at 1PM 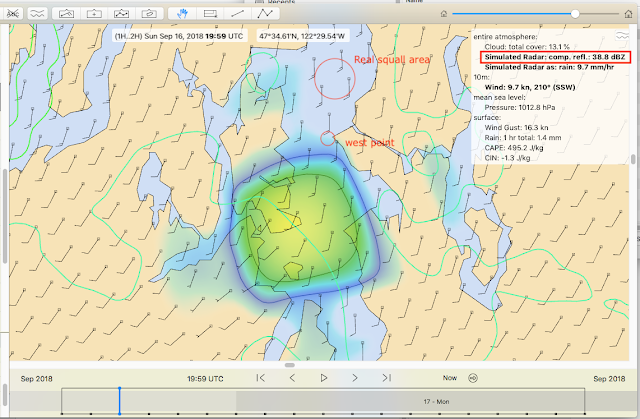 Here the cursor is over the squall showing reflectivity of about 39 dbZ, explained shortly in a table below.  Then 30 min more at 1:30 the squall is gone, and the wind is back to about what it was, but a bit lighter, which is actually seen as well in the lighthouse winds. 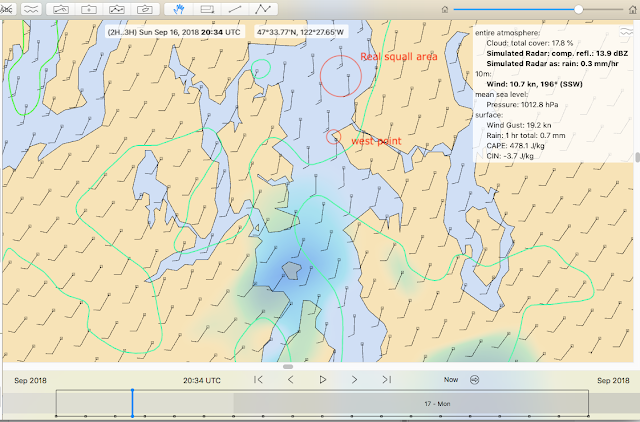 This forecasted squall was not at the right place... i.e., where I saw the boats encounter it.   It was about 5 to 6 miles south of the observed area... but I must say I could only observe the area marked above; i do not know what happened in this region to the south.

But this forecasted squall was about at the right time, maybe 15 min earlier.... if of course there was any real correlation between this forecast and this actual squall.  There is another note  to make about conditions at this time on this day, but first let's look at a page from our text book that describes this simulated radar data and gives a real, confirmed example from Spain.

Here are a couple pages from Chapter 4 of our book that shows the reflectivity scale that we made to use with this new REFC data.  This is not official in any sense. We made this as a guide to interpreting weather radar images for all types of rain, and then apply it to this data. 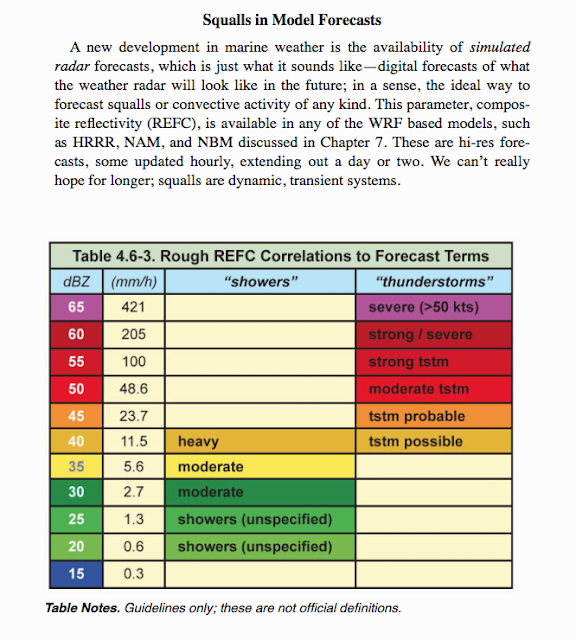 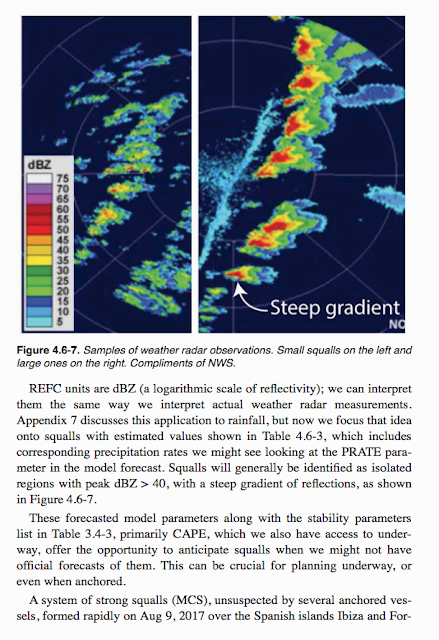 The REFC values we saw in the forecast were about 39 dbz, which is on the border between showers and thunderstorms—I do not recall any rain with this system;  maybe we will learn something from those who actually experienced it.

In any event, if we were planning this race before the start, we could have looked at the HRRR data and maybe even the NAM CONUS (3 km)—not every one offers this latter model, but LuckGrib does, and we would have seen something more generally like the one capture below. 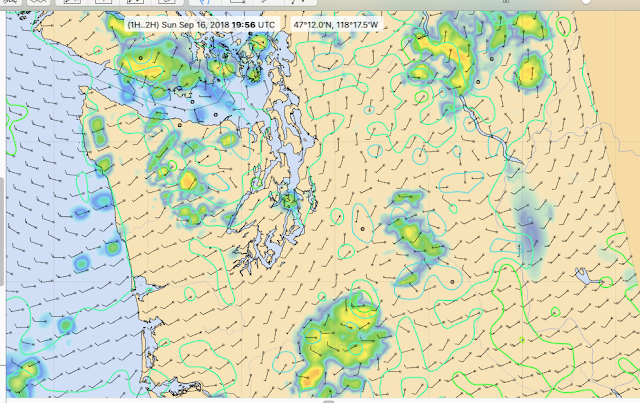 The forecast was for very unstable air with  showers crossing the region.  With LuckGrib you can mark a point and ask for a meteogram of any parameter. Here is what the REFC looked like in that part of the Sound. 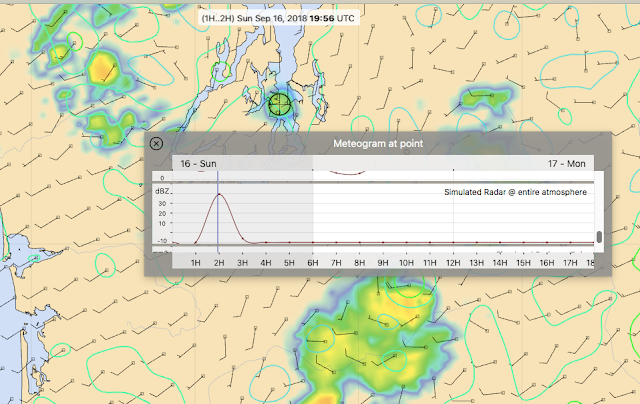 For what it is worth, we see that the likelihood of squalls peaking out right at race time!  Again, though, this could be all coincidence.

The instability of the air at race time, however, was documented in another, rather dramatic manner caught on film from the parking lot at Fred Meyers. This was filmed at almost the same time I saw the boats affected, but again, there is not a direct link. I have lost the reference but my FB page says it was identified as "about 1230." Not sure where that came from. 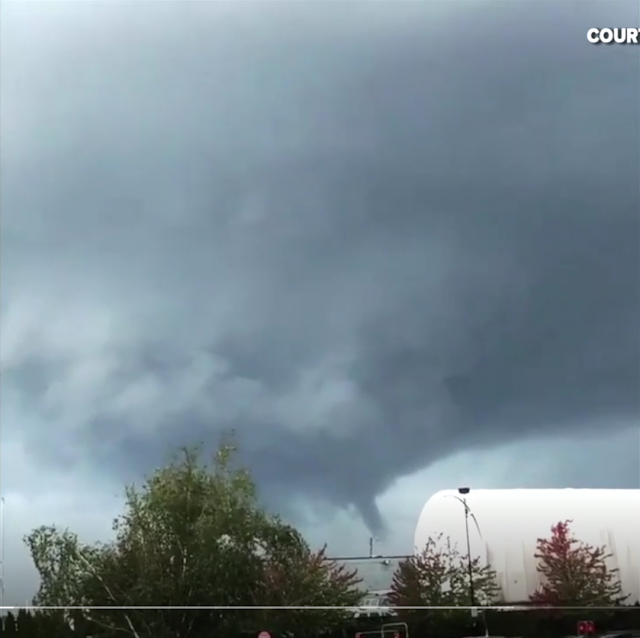 But here is the bearings we checked when we saw this: This is the perspective in the video of the cloud. 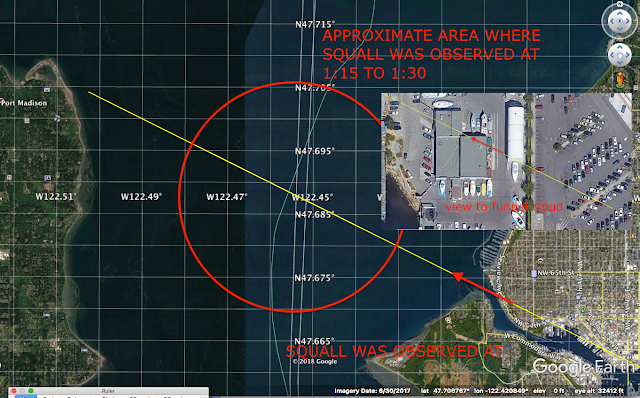 This then extends across or toward almost the identical location that I was watching the squall hit the boats.  This is clearly circumstantial evidence. We have no specific distance information from the cloud image. It could have been over the Fisherman's Terminal. But such clouds do indicate notable instability, and the squall that I saw was a clear example of that.

So that is the story. Next step is to start using this REFC data to check conditions before races to see if we can learn more.

PS. LuckGrib now has a full functioning free trial period for Mac or iPad, so folks can experiment with these exotic GRIB files... plus get access to the best wind data available.