We have two sources of scatterometer data these days, the 3 Metop satellites with ASCAT data and the US Navy Coriolis satellite with WindSAT data. The latter does not get much mention in official NWS forecast discussions, whereas ASCAT is referred to frequently. The reason for this is not clear, so in  a first step toward trying to understand this, we will compare the data whenever we can spot passes at about the same time, over the same region.  It could be we can calculate that conjunction of passes, which if so we will add to our satellite prediction time article, which is underway.

The OSWT site presents the ASCAT data in a 10º x 15º Lat-Lon grid and the WindSAT in a 20 x 30 grid. They both have in principle 25-km resolution, so the reason for this is not completely clear. It could be simply that the single WindSAT data swath is about twice as wide as one of the halves of the two ASCAT swaths, so it would likely take a different file layout to account for it.

If the WindSAT data are consistent with ASCAT, then this would be to many mariners a "new" and useful tool, because it has a wider swath of data without a nadir gap like ASCAT has. In that sense, the WindSAT scatterometer is more like the old QuikSCAT that provided so much valuable data before it failed—long after its design lifetime.

Below are several examples, the newest will be at the end where we are adding them. There is there a May 31 example that shows a larger difference than earlier ones... and we know what the answer is! 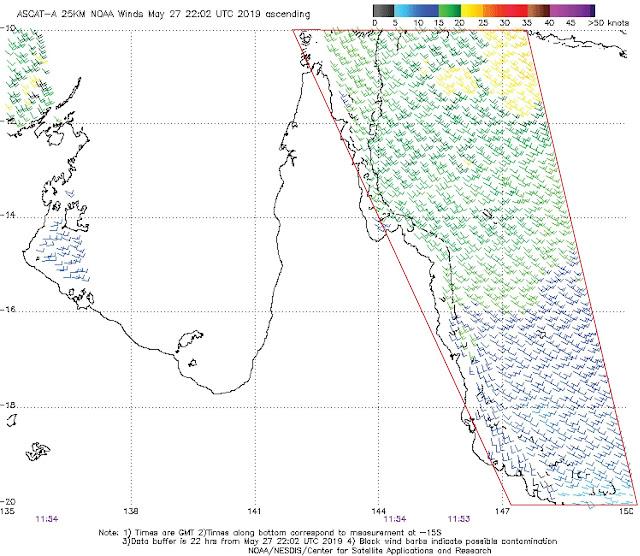 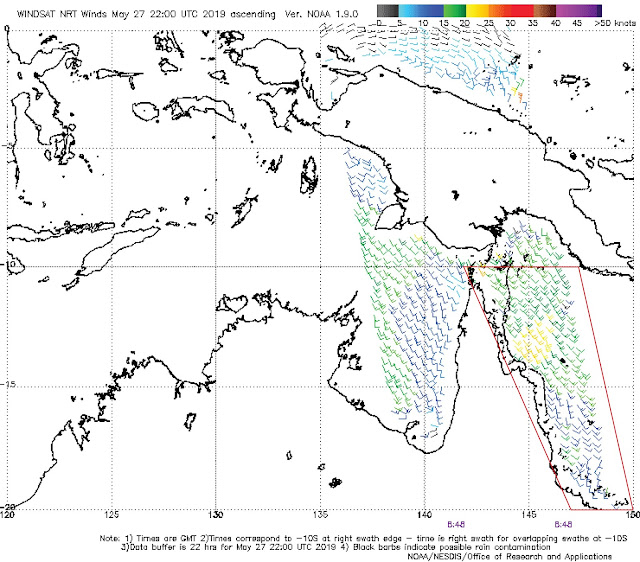 The data are not exactly at the same time, which has to be considered, but the reported winds are generally similar, though not at all identical. Yellow means above 20; green means below 20. Blue means below 15.

So from this comparison we can say, if we assume the ocean had not changed, the wind data agree to within about ± 2.5 kts, which is all it takes to change the colors of the barbs. There is a yellow patch in WindSAT that is green seen in ASCAT, but the the green is a dark green, which is closer to yellow.

In the next two examples, we put position markers at the colorbar wind-speed boundaries on one image and then read the wind at the corresponding positions on the other image. 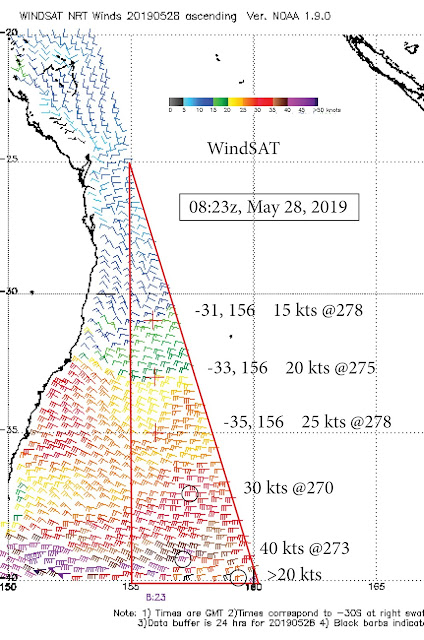 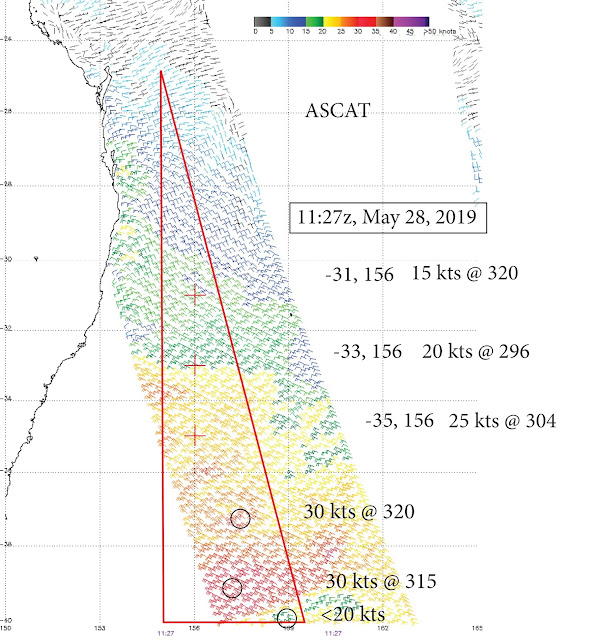 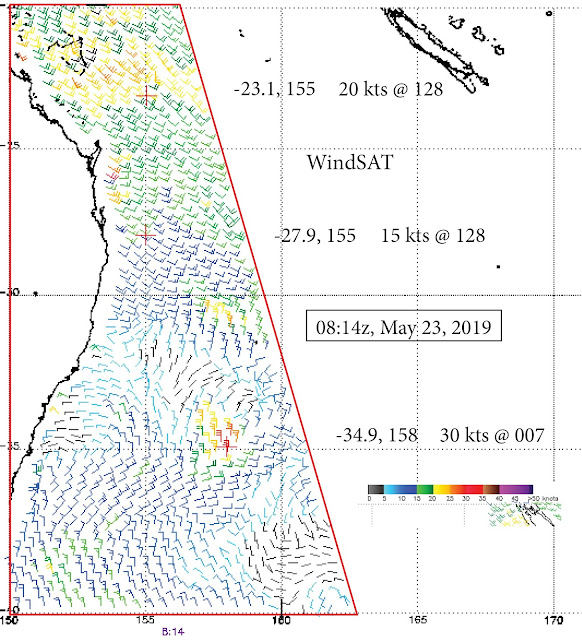 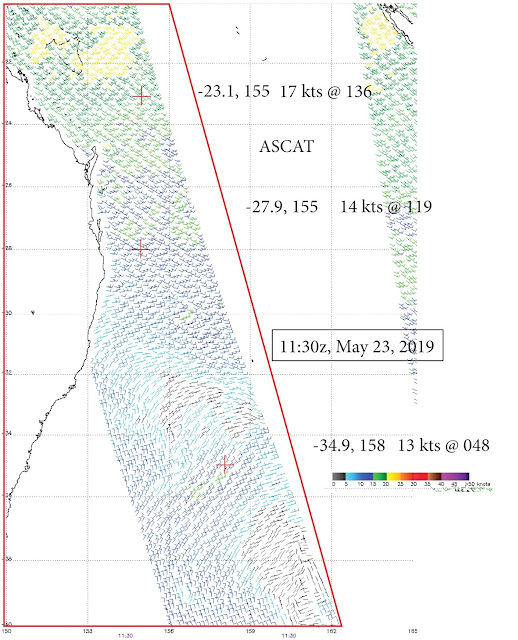 Several Examples to be inserted here.


Example x. Time difference 2h 58m
This is one of particular interest, because we have been tracking Jacob Adorams's  ocean rowing vessel Emerson in this region at this time... and we know from him what the actual winds were at the time.  It is also the case where we see the largest difference so far between ASCAT and WindSAT.

Here is where Emerson was located (yellow stared marked) at the time of these passes: 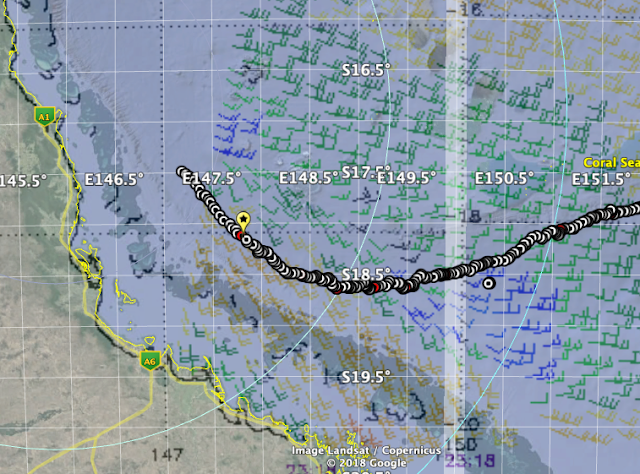 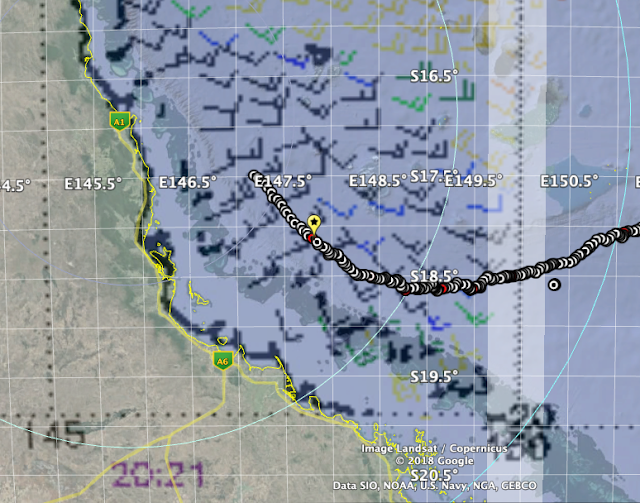 And here is what the actual winds were on this day: 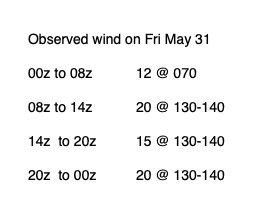 At the time of both satellite passes, the wind was 20 kts from the SE.

We are looking specifically at the region in the bottom of the outlined section, where ASCAT reports 20-22 kts from the S-SE (152T), whereas WindSAT shows rain contamination over this region but wind vectors from many directions. The ASCAT is consistent with observations well within the uncertainty of the observations.

At first glance this seems a big difference, but the WindSAT is more sensitive to rain than ASCAT and there are indeed many rain squalls in this region at this time. 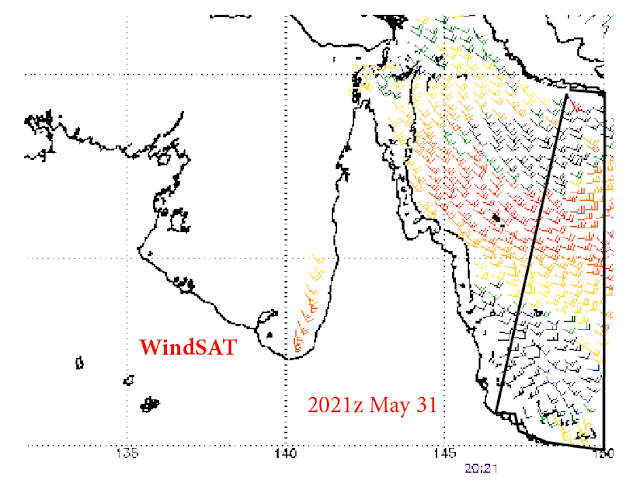 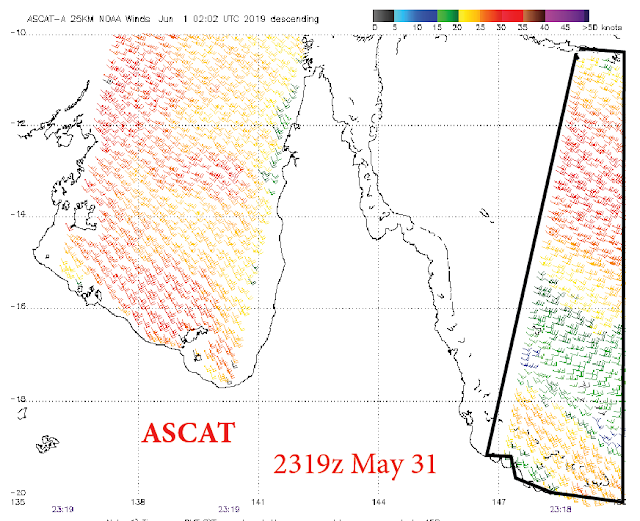 To give WindSAT the benefit of the doubt, at first we thought maybe WindSAT was trying to show the unusual observation we got from the boat of 10 kt winds from 070 for Friday morning and much of Thursday.  But on the 30th, we could spot a local High in the region that would have accounted for this. It showed up nicely the BOM "gradient wind" streamline maps—we will be discussing these in another blog post.

With that in mind, we looked to the surface analysis maps shown below; one before these two satellite passes (18z), and one afterward (00z, the next day). 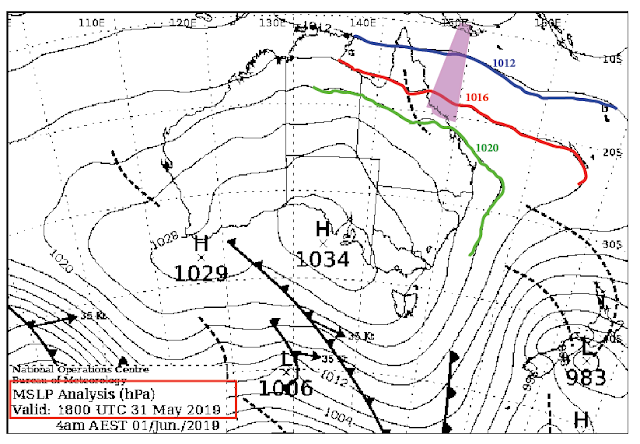 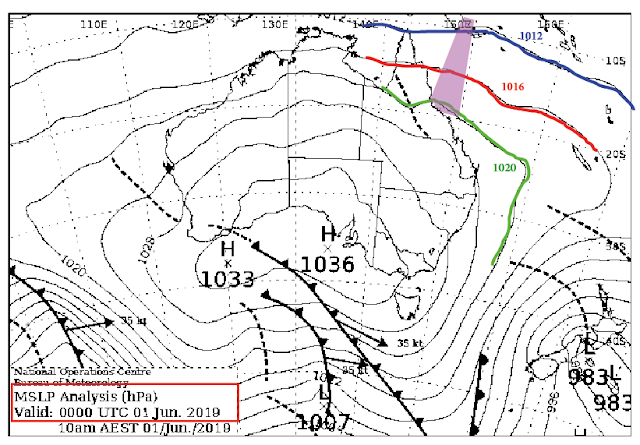 The magenta region shows the overlap in scatterometer data. We see the gradient actually weakening in the southern part where the winds differ most during this period, whereas the later ASCAT shows higher winds. Keep in mind this is SH, winds going counterclockwise around the High and out of the High into the Low, meaning this wind direction is SE, tending toward S-SE.

In short, the maps do not support the WindSAT observations.  At this point we need to ask the experts what they can tell us about this.

We will report back here when we learn more... and we will add several other examples above this one. They are done, just not posted yet.
Posted by David Burch at 3:41 PM

David, you might explore Model Accuracy ( www.modelaccuracy.com ) which has the functionality of comparing various models against NOAA buoy observations and Expedition log files, to determine which is the more accurate and to what extent one needs to calibrate when using them. Have been testing it and providing feedback to Chris and his team.