When planning a route across the equatorial current system from northern latitudes down into southern, or vice versa, it can be crucial to be aware of the net current set along the route. You are in trade winds the whole time—other than two hundred miles or so of doldrums between them. The trades will vary from the NE to E in the north and from SE to the E in the south, typically at some 10 to 18 kts. You will be crossing trade wind waves, which are larger than we might guess due to the long fetch and duration of the trades. There will most likely be long stretches of a close reach in these big waves, so it might be hard to maintain a due south course.

On top of that, the net current drift to the west could be large enough that a due south heading could not make the target destination. This note shows how to estimate how much that set will be, so you have a good reminder that one navigational goal, throughout much of the route, will be to make miles to the east whenever you can to overcome the anticipated set and potentially strong SE wind.

Such long range sets can also enter into emergency route selection, and as such we have in our book Emergency Navigation, a section of estimating the net E-W drift on a voyage from San Diego to the Marquesas. In this passage the main set to the west is reduced by a section of the route, about several hundred miles long, where the drift is to the east in the countercurrent, a system we discuss in another article.

The method we used then, which is still feasible for planning, is the use of Pilot Charts as they give climatic current drifts in knots or nmi per day. Pilot Charts are available as PDF from the NGA site (google "MSI NGA" to find the link; MSI is marine safety information), or better still use the digital RNC versions from OpenCPN.org under chart resources.  These can be viewed in any enav program, including of course their own free OpenCPN.

In our online course on Emergency Navigation we have a practice exercise on this process, and this note is essentially an outline of the answer to that exercise (Quiz 9, Exercise 1). This exercise crosses the same basic current system, but instead goes from Hawaii to Tahiti in July, about 2900 nmi on rhumbline 170T, but the punchline is if you sailed that heading the whole way with a speed made good of 6.0 kts you will miss the Society Islands.

To work with with Pilot Charts, you can set up plots like the following, either on printed charts or all done digitally, as this one was. 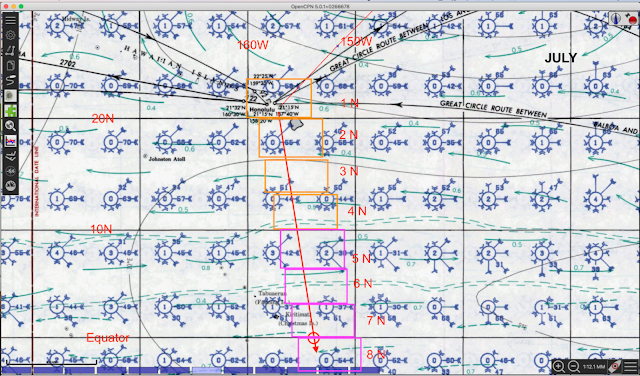 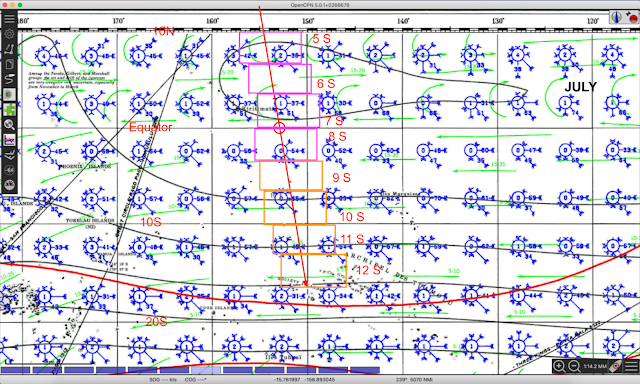 There will not be current data (shown as green vectors) in each of the boxes where we want it, so we have to the best we can to estimate this based on nearby data. We also need to keep in mind we are working on estimates of the estimates.  We won't know ahead of time what the wind speed is, but generally when the charts specify a range such as 10 to 20 miles a day, we would anticipate the stronger drift with strong trades (approaching or over 20 kts) and the lower values with lighter trades of say below 10 kts.

This then, we leave as an exercise to fill out the list and sum up for a net drift.

Another approach to this analysis is to use ocean model forecasts of the surface currents. We have several options in this part of the world. We can use the global RTOFS model, HYCOM model, OSCAR data, or the French data from Copernicus. We have an overview of ocean currents at www.starpath.com/currents, with these references.

If you are evaluating this in about real time, such as just before departure, then the process is very easy, because the data are contemporary, and easy to come by. You can get the data, usually RTOFS model, from many sources, including Saildocs or LuckGrib, both of which are explained in Modern Marine Weather.

A twist to this solution is the date of the exercise. It is now January, and we want this analysis for July. These currents change somewhat from month to month, as noted in the countercurrent article linked above. An interesting fact about the popular global RTOFS data is that, unlike other model data, it is not archived; so we cannot use that for July of last year. The global HYCOM model,  on the other hand, gives very similar results, and it is archived. [Note: that Atlantic RTOFS is archived from 2011 to Mar 2017 in grib format, but with an unusual format, only visible in Panoply.]

We list sources for all archived weather data in the Archives Atlas of the Weather Trainer program, which is just one of its extensive ongoing resources. Find the archived HYCOM data along with other model data at the NCEI web page (the live ocean data, in contrast, is found on the NOMADS page, or more conveniently from one of the several GRIB viewers, such as LuckGrib).

However, finding the data for this retrospective analysis is not the end of the challenge, because the digital data are not in GRIB format. The are in NetCDF format (.nc), which must be read in a program like Panoply. We have a video on the use of Panoply for viewing archived ASCAT data.

I am not proposing this approach as a standard procedure, but for now, I am just using it to analyze these July currents so they can be compared to the Pilot Chart solution.

Below are the HYCOM currents viewed in Panoply for the route in question. These are the ones I used to read off the currents every 2º going south. 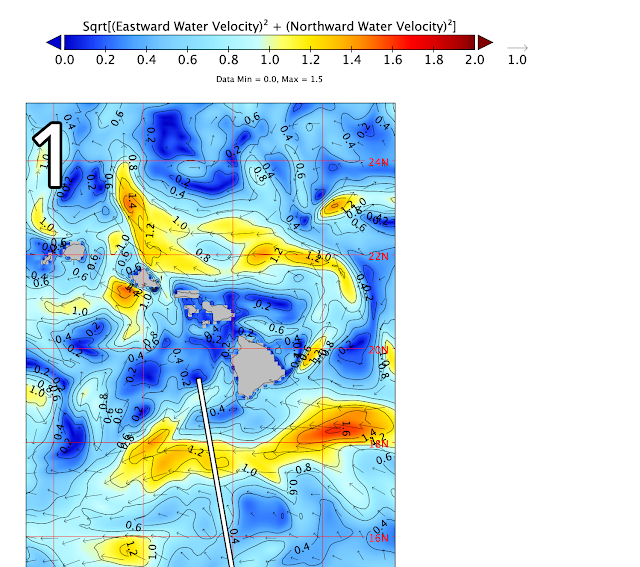 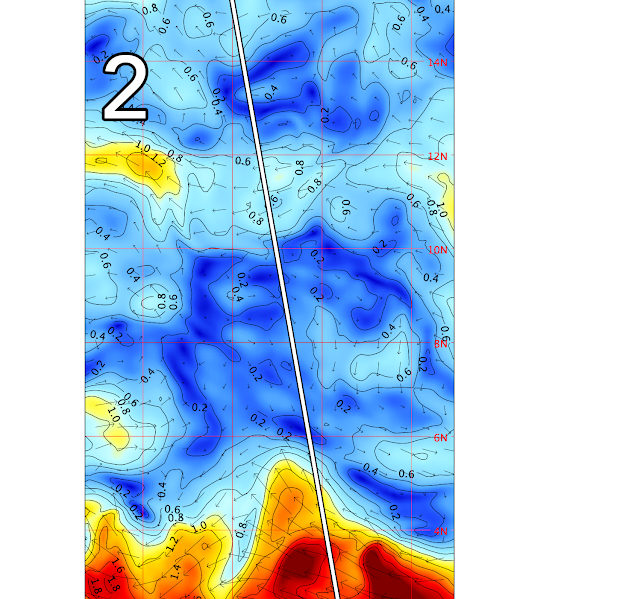 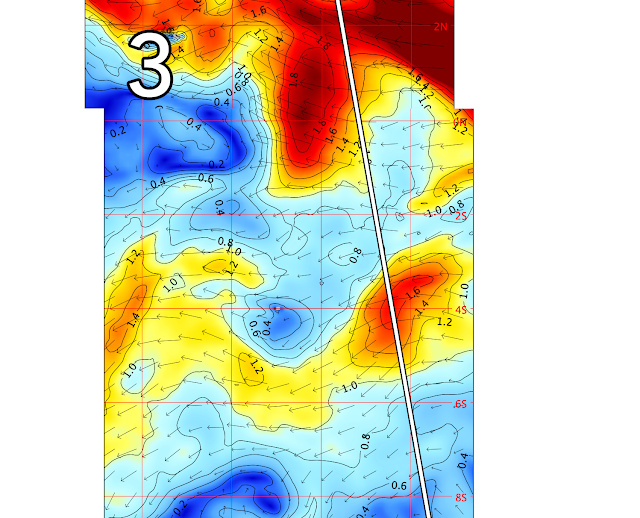 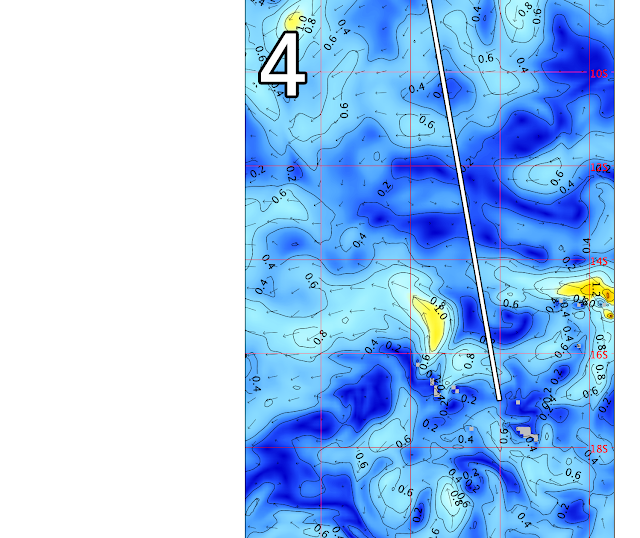 HYCOM currents for July 2019 viewed in Panoply, used to evaluate E-W set to compare with Pilot Chart results for the same study. Keep in  mind, Pilot Charts are climatic values, and the above is one specific year.

Below is the summary of currents, where the E-W component has been pulled out. In other words, when you do this, and you find a current of 1.0 kts to the NW, we have to break that into N component and W components, which for this 45º is just x 0.7.  So 1.0 to the NW adds 0.7 to the West.  For this study we do not care about the N-S components.  The N-S component primarily determines how long it will take, but not the set to the West. Technically it has some effect, in that it slows us down or speeds us up, so the time spent in that current segment is not the same as the 6.0 kts we are assuming. But these currents are small, so that is a relatively smaller effect... i.e., 6.0 vs say 6.4.

Here is first the raw data, followed by a transcription—remember this is the answer to a training exercise. 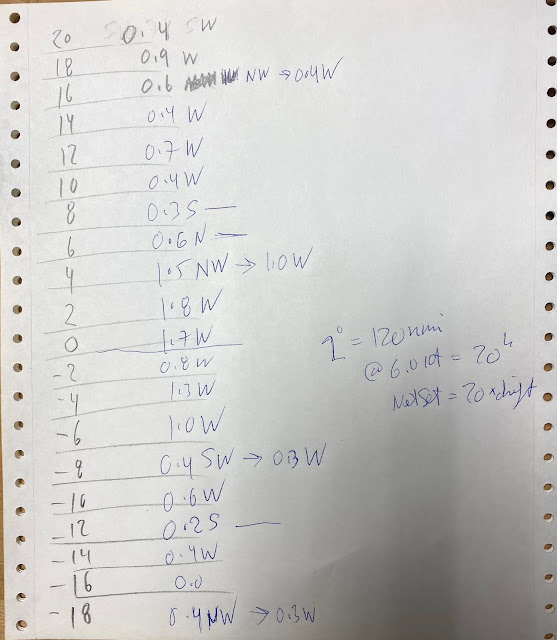 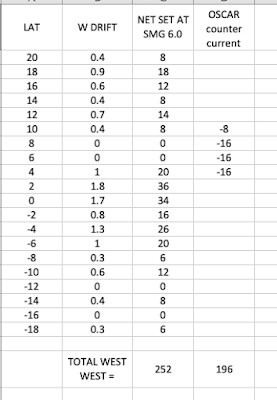 HYCOM forecasts for net drift to the west in July 2019. We estimate the missing counter current below which is shown to reduce the set from 252 to 196 nmi.

We ended up in July of 2019 with a total westerly set of 252 nmi, but notice that this year there was no notable counter current forecasted, usually seen in July in the range of about 5N to 10N. That result is not common, and likely unique to this model for this year, so we look into ways to estimate the countercurrent.

Below are the OSCAR currents for this same time period, and they do show the countercurrent in about the right place. It is these data that were the basis of the net drifts shown above. 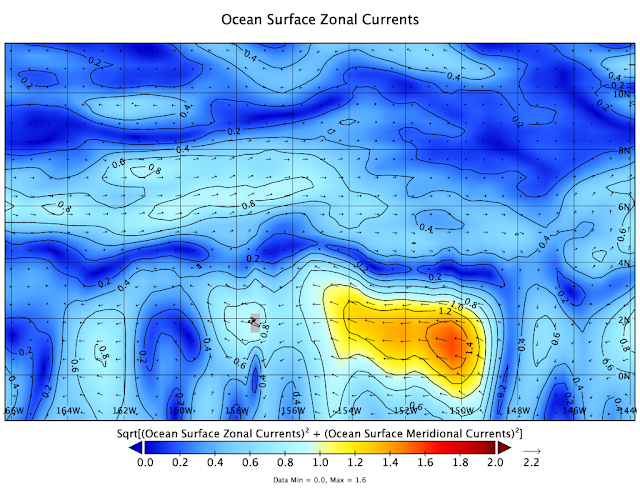 The OSCAR data shows the same strong patch to the west just below the countercurrent, but it is weaker. The OSCAR currents are 8-day averages of changing values so they are always going to be slower than any instantaneous forecast from another model.  In fact, the estimates above for the counter currents are likely low, but our earlier study showed these as fairly close in this particular system.

Another way we get evidence that there was indeed a countercurrent in July of 2019—and likely to be one when we get there in some July of the future—can be seen in the French ocean currents forecasts from the Copernicus viewer. This data can then be exported to Google Earth, which we have done below. 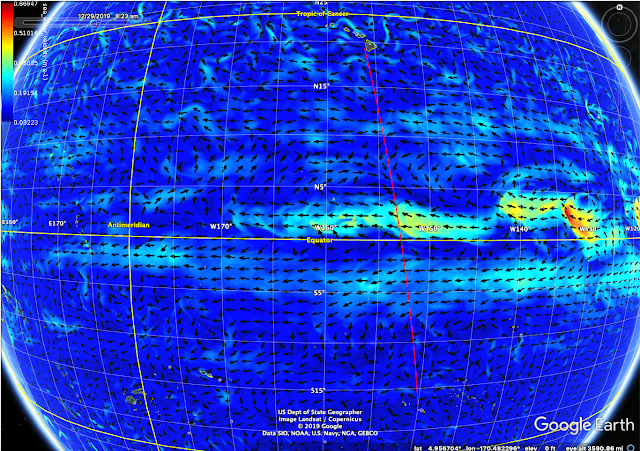 Ocean current forecasts for July 15, 2019 from the Copernicus program in France, exported to Google Earth

We did not do the current summary from this data, but the countercurrent is clearly visible. We will leave this as part of the net drift exercise to find the total set to the west using this data. It is fairly high resolution in Google earth and the drift speed scale color bar is shown top left in units of meters/sec.  Multiply by 2 (1.93) to get kts.

So the new wording of the exercise is use the Pilot Chart plots given above to find the net drift and then compare that to what you get from the Copernicus forecasts obtained from the links above.

For best understanding of this process, do a Pilot Chart study for the present month using live RTOFS data. Then the digital data is easy to get.