In a recent note (Atmospheric Pressure: Look Close to See its Microscopic Pulse) I presented high-resolution results of three barometer sensors in three phones here in the office using our Marine Barograph app. This app is well designed to measure and record small changes in the pressure, and indeed we saw small oscillations in the pressure that were observed on all three, presumably independent devices.

The question was raised as to whether there could be any ambient interference with the pressure or electronic circuits inside the room that were responsible for these oscillations, so we decided to move the three phones outside and then put them into a metal box, that serves as a Faraday cage that blocks out wireless interferences. Also these were now running on batteries not connected to chargers as the first measurements were, which does indirectly link them via the ground line at least.

This new sophisticated (!) set up is shown below. 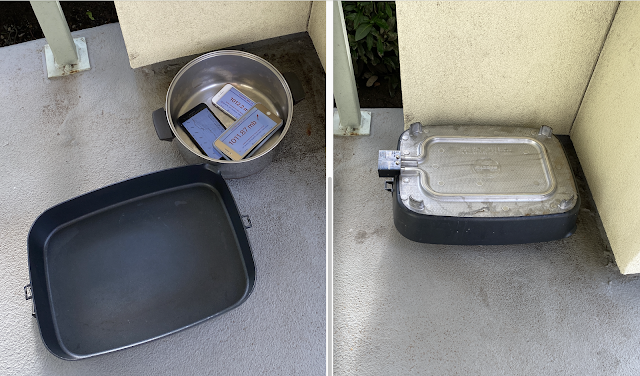 We let the units collect data for 40 min or so, and then we used the app's export .csv option on the 30-min files for each, which includes the pressure every second. These data where then imported to Excel, trimmed to be the same start and stop times, and again shifted one of them that did not have its offset turned on, as earlier.  The results are as shown below, which we annotated with the colors. 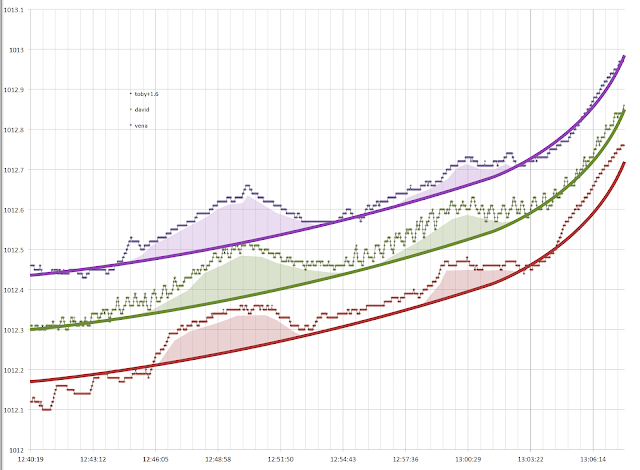 We learn a lot from this result. First, it looks like what we saw earlier measured indoors, namely about 0.1 mb oscillations at about a 70-sec period was somehow unique to being indoors and connected via the ground connection. All three showed that pattern on some level and they were more or less in sync. I believe now that this was an electronic cross talk between the green one above and the other two. That sensor circuit seems to be defective on this very low background level, and that oscillation is almost certainly artificial.

Second and foremost, however, is that within the clean environment of these new measurements, there is still a real, physical variation of the pressure on a sub-millibar level that is clearly detectable with this $15 app.  The scale of the variation shown is really small, with peaks showing up on the 0.1 mb level with periods of about 5 minutes.

It could be pulses in the actual atmospheric pressure pattern or it could be disturbances to that pattern from other sources. We see the pressure is clearly rising over this period (~0.6 mb in 26 min), and we see the rise rate increasing as well.  This is all good tactical information, totally unrelated and not dependent on any ripples in the curve. The navigator at sea would care about this early detection of a pressure rise, but does not care at all about the ripples on the curve.

On the other hand, an atmospheric scientist might care... or maybe more likely, an engineer entrepreneur might see this and wonder if that is detecting the passing of a jet plane that I cannot see or hear?  Would the military care about such a device if really works this way?  Next time you are waiting at the airport with an iPhone and this app, you can collect the data to test this WAG proposal!

We know that this app can detect wind gusts, but these are much larger spikes in the pressure on a much shorter time frame. The 5 minute period is intriguing.

In any event, it remains promising that we can purchase an app for so little that has all the functionality to be an actual scientific instrument. Crowd sourced measurements of pressure might lead to new discoveries, or at least maybe contribute to improved weather forecasting.  Mariners have no excuse at all these days to go to sea without a high precision barometer in their pocket... or as we recommend, get an old one and velcro it to the bulkhead to be aware of the shape of the pressure changes at all times.

Agree so much about the amazing resolution & accuracy you can get so cheap these days. I use a BME280 pressure sensor attached to a raspberry Pi which records the data every second, fascinating, never knew there were often twice daily "tides" in pressure before. Combined with plotted windspeed & direction it can get a bit compulsive 😁...
[IMG]https://i.imgur.com/41Ijiam.png[/IMG]