NOVA Video on Ever Given Suez Canal Grounding — Excellent, but Omits a Key Point on Navigation

NOVA on PBS has just published (5/18/22) an excellent 53m video called "Why Ships Crash." It focuses primarily on the grounding of the Ever Given in the Suez Canal that took place on 3/23/21 affecting billions of dollars of global commerce, with added related facts from other incidents, and an important contribution from the master of the ship that was right behind the Ever Given. I want to show here that this engaging and informative NOVA video nevertheless missed an important point about safe navigation practice.

It turns out that at the time of this accident we were just in the process of developing our new online course on Electronic Chart Navigation, and it occurred to me that the primary way we recommend using modern electronic chart navigation could have helped avoid this accident.  I would go so far as to say this should be standard procedure, but it is not emphasized enough in navigation training we see elsewhere.

Thus we set about a careful study of the incident and published a video reenactment of the grounding on 4/19/21, about three weeks after the incident. At that time there was no information published anywhere we could find about the environmental conditions or of the actual track showing what took place. So our first job was to piece this together from basic meteorological and hydrographic (tides and currents) information we could look up for that time and place.

We just learned for the first time in the NOVA video, that our analysis of the wind was essentially right and indeed this was the first place we have seen any confirmation of our speculation that there was a strong following current that contributed to the control issues at hand. They have also confirmed our description of how the accident took place, which is a reassuring, as this was done on our own, without the benefit of a year's research into this.

My main goal here, however,  is to stress that the detailed NOVA study did not include the most important demonstration and conclusion of our analysis, meaning our proposed way to use standard electronic chart tools to monitor the navigation underway that may have prevented the accident in the first place. Namely, the display of both the heading line and the COG predictor line, so that the navigator would have immediate awareness that they were not going the way they were headed. These tools displayed on a real-size vessel icon traveling along official ENC charts of the canal can provide an almost instant alert to trouble. In some cases we could see that they actually turned the wrong direction to correct for their position. We also learned the time scale involved, which seems it may have been manageable. Vessels preceding them and following them covered the same ground in the same conditions without incident.

We cannot stress enough the importance of turning on both of these lines and then adjusting their lengths for convenient comparison. The NOVA team had the same AIS data we had, which includes both the course over ground (COG) and the true heading of the vessel (HDG), but they only showed it as digital readout, and did not mention that they did not agree. This is in fact the display that some vessels use, but it does not provide the visual alert that the lines provide.

Rather than just replay the AIS data as purchased (it comes with a stock replay display), we converted the AIS data to a NMEA stream that emulated their actual instrument outputs so we could run this in a real  navigation program (qtVlm) using real nautical charts to see exactly what they would see from the bridge as they proceeded in real time, and more important, allowed us to set up the navigation display that would be the safest way to transit the canal. A sample is shown below. 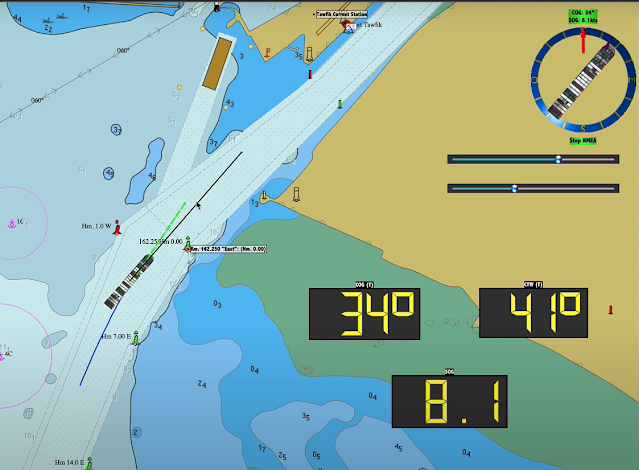 Figure 1. A frame capture from Part 1 of our reenactment, just as the vessel enters the canal. The wind is about 25 kts from 160. The black line is the heading line, which is the direction being steered, namely 041, where as the green line (COG predictor) shows the direction the vessel is actually moving. The end of the green line is where the ship will be in 2 minutes. We see from this that it is not steering enough to the right and indeed headed toward the far side of the canal, which it does get right up to in the next few minutes. The ship is getting pushed 7º to the left.
Below we look at a few minutes into the trip. 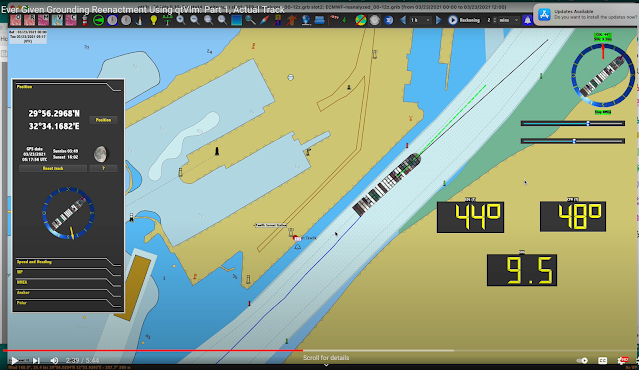 Figure 2. Again from Part 1, this view at 0517z just after the ship was at its closest point to the left side of the canal. Here steering 048 and making good 044. Not quite enough to crawl off the edge, but such turns have to be slow, in that the vessel pivots about some point near one third of the way in from the bow... at least that is what we assumed in this reenactment.

Below is a picture at about the same time from the NOVA video. Figure 3. NOVA presentation of the ship at 0516. Here they do show the difference between heading and COG, but it is not as much an alert seen this way as with the lines. Note that in both simulations, we see the ship is across the first dotted line, which marks the depth profile of the canal.
At 0530 the ship approaches the other side of the canal as shown below. 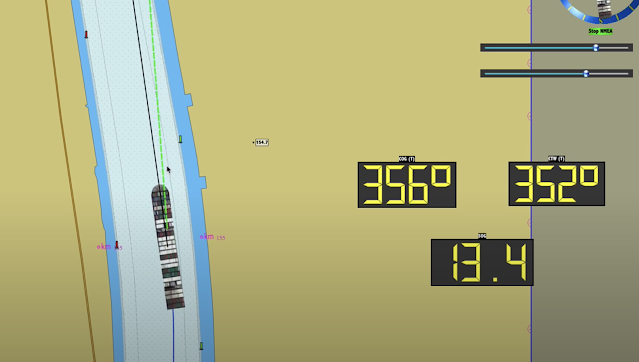 Figure 4. At 0530Z the ship is drifting toward the bank (green predictor line) even though its heading is more to the left... probably not enough to the left. Also note the ship is moving at 13.4 kts, whereas the speed limit it 8.6 kts (Article 54, SCA Nav Rules). Presumably the two SCA pilots in charge of the vessel during transit had the right to override that limit. 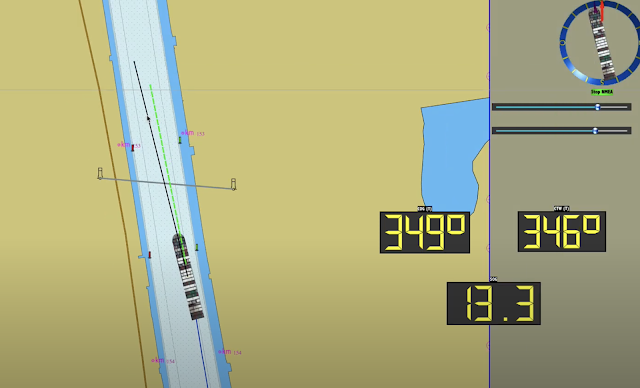 Figure 5. At 0534Z the ship's GPS location has touched the dredge line shown on the chart, which is probably close enough to have the canal sides and bottom begin to interact with the motion of the ship through bank and cushion effect and squat covered in our Part 4 video. NOVA also proposes the bank and cushion effect, but does not mention squat. It will take marine engineers to confirm this but it seems likely that squat did matter.
Below we see the depth profile of the canal as we discuss in Part 4 of our reenactment.

Figure 6. Screen cap from Part 4 of our reenactment videos. Here we show that the official Egyptian ENC charts agree with the SCA official depth profile with regard to the dredging limits. Floating on top of that is a scaled profile of the ship with the GPS position marked with a red line. The track of the vessel on the chart is based on the location of the GPS.
We can move the ship profile around in the canal to see that when the ship track crosses that first dotted line, the hull is getting very close to both the sides and the bottom of the canal, so that both bank effect and squat likely affected its motion. The references given in the Part 4 show another case of a ship  grounding after oscillating from one side of a channel to the other, losing a bit more control on each swing.
Our work was presented in four videos, the first being a short one showing what actually took place as could have been viewed on the ship's electronic chart display, and likely what the cause of the grounding was, and how it might have been avoided. Three following videos fill in the background on how we got the AIS data and processed it, the official Egyptian charts, and confirmation that our depth soundings and contours were consistent with the online Suez Canal Authority (CSA) Navigation manual. Plus we have a discussion of bank and cushion and squat, along with a section on why a notable following current can compromise effective steering.
We speculated that the following current could have been 2 to 3 kts; the captain of the vessel behind Ever Given (in the NOVA video) mentioned 2 kts of following current at the grounding site, which he had to fight to stop his own ship. We still do not know what the current was earlier, more to the south, where the eventual side to side track got started.

Here are the four videos. Part 1 includes a detailed video description explaining our motivation, with of course the acknowledgment that (at the time) we did not really know what took place nor what actual conditions were present. A big part of our work was to estimate the wind and current as best we could, using several numerical weather models and archived tide data. We learn now from the NOVA video that our conclusions were essentially correct, which was reassuring. We still do not find any official CSA reports, which may not appear at all since the complex law suit was settled out of court.

We encourage those interested in this event and with ideas on how such things might be avoided to please look over the videos above. For recreational mariners sailing in areas of strong currents we strongly advise this basic use of heading line and COG predictor to get the quickest alert to the need for response from the helm.  On a huge ship, which has inherently slow response, the timing of the helm is likely even more crucial.

Official reports we do find are less than helpful. This one Egypt’s Suez Canal Authority reveals how MV EVER GIVEN went aground, holds shipmaster responsible for the accident (May 31, 2021)  includes this statement:

“The captain requested many things at once [during the accident]. He asked for eight demands in 12 minutes,” xxxxx said, noting that the captain had to reduce the speed instead of increasing it but he was confused in this situation."

Then in an ongoing discussion about vessel speed we see this:

"The speed was 11.2 meters per second at a rate of 22 knots," xxxxxx said, explaining that two high speeds of 43 knots per hour and 40 knots per hour were recorded on the black box.”

It seems this must have been a reference to wind gusts taken out of context.  It certainly was not boat speed. We know the speed at every second. Gusts to 30 and 40 were mentioned in the NOVA video.  I suspect that our deduction that the wind was about 25 from the 160 or so, gusting to 35 to 40 was likely pretty close. This seems to have been confirmed by reports in the NOVA video.

A major reference for the NOVA film content can be found in this extensive Bloomberg article Six Days in Suez: The Inside Story of the Ship That Broke Global Trade by Kit Chellel, Matthew Campbell, and K Oanh Ha on June 23, 2021, but they do not cover navigational matters.