With a clear view of the sky, GPS can usually give us a fix within 20 or 30 yards, even without a WAAS satellite locked in. But on a long trip along coasts, in and out of narrow passages, the accuracy can vary depending on how much of the sky is showing. Often we do not pay attention to this detail, but it is printed out on the GPS display in some form giving reliability, usually in terms of feet.

The OAR NW team decided to pull into Snug Harbor for some repairs they discovered needing after getting under way.  You can see info on the start at www.oarnorthwest.com.

The track shown there is from their Yellowbrick transmitter, a slick device that relays back their position, COG and SOG, and brief text messages every 15 minutes by txt msg to a cell phone at home base.  They apparently decided to check out this system by keeping it on at a fixed location overnight to see what the spread in positions might look like.

The results are shown below. 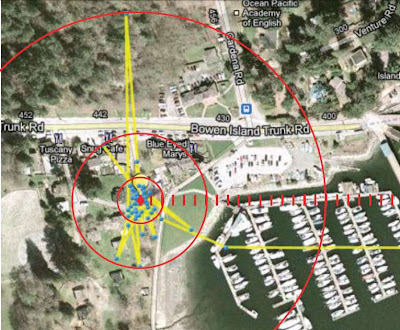 I added the scale to the picture. Each tick mark is 10 yards. Red rings are at 20, 60 and 170 yds. These are fixes every 15 minutes. We see that most of the signals are within 20 yards, as expected. There are outliers, but even these are mostly within 60 yds. We see just one rather far out at 170 yds.

This is strong testimony for this device because the unit had only some 10% of the usable sky to see through two large windows. The main message is, if we subsequently see the boat on land as it traverses a narrow channel we should not panic. Wait another 15 min to see if this was just one of these fixes from the far wings of the statistical distribution of fixes.

In narrow passes and along steep cliffs, or back packing with your Yellowbrick, you have GDOP to deal with (geometric dilution of position). Position accuracy depends on the geometry of the satellites in view. It is the same issue of getting a bearing fix from two land marks next to each other.  Fixes are best when the targets (or satellites in this case) are more spread around the horizon.  On a hotel balcony, or walking or rowing along the side of a steep cliff, notably less than half the sky is visible, which might limit your accuracy.

A good way to check this when in doubt is refer to the satellite display on the GPS unit. There is usually one in the set up menu. It will look some thing the following. It is a radar like display. The center is overhead in the sky, the circumference is the horizon. North is usually at the top of the page.A satellite located about half way out at 3 o'clock would be 45 deg high bearing due east.

Here is a sample of a good distribution (but normally there would be more satellites... i just found this pic online). 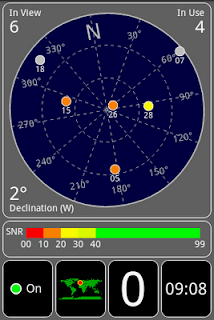 And here is one from my Garmin 301 looking out a window. It does not give a strong fix in these conditions, but even a weak fix these days is pretty good. Generally the unit will just say tracking or can't find a fix if this gets this bad. 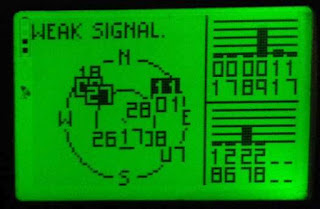 We see satellite 09 (about 15 deg high) and 27 (about 30 deg high) are the strongest, but they are both in the same NW direction. It has locked on to 11, but the signal is weak.  Note that is knows where the others are, but it cannot connect to them. When there is only two satellites in about the same direction the fix will not be as good. Knowing this does not give you a solution, but just an understanding of the limits involved. You might learn, however, that if you just move another few feet (on land to get away from a building) or another quarter mile on the water to get past a bluff, then you would have access to the satellites that you can tell from this picture are being blocked.

Most GPS units have such a display, but if not there are numerous computer or smartphone apps that do  this type of display and analysis.  One we like a lot for the PC is called GpsInfo.exe, a free utility from US GlobalSat.  It also does a good job of locating the com port with GPS signals as well as showing a hyper terminal type display of the incoming signals (again, most ECS programs have such a utility, but we have still found this tool useful. The instructions imply it has to be installed, but they must refer to a version that they ship with their GPS units. This link brings a 100-kb, stand-alone file that runs as is, no install, no interactions with your registry. Just realized we have not tested to see if this works on 64-bit.  Will try tomorrow.