I am a strong supporter of the work of NOAA, especially the NWS, NHC, NCEP, and NOS. We praise their work daily, and teach students how to use the many excellent resources and services they provide. But once in a while, spokesmen of even the best programs can wander off the trail. According to a chief NOAA spokesman:

"Storms today are different now because of sea level rise. The (Sandy induced) storm surge was much more intense, much higher than it would have been in a non-climate changed world."

This statement is very misleading, which has led me to write this note.

Climate change and global warming and the associated rise in sea level are very serious issues that do warrant our attention. Erroneous statements like this, however,  cause much damage, because the media picks up on it, and they spin off into further sensationalism, which just gets worse with cross quoting. They also do not seem to be much into checking what they publish these days.

The interview appeared yesterday on NPR. The NPR interviewer immediately takes the bait, adding: “Even garden-variety storms may someday heave water up to your doorstep...How do we prepare?”  Check your favorite news source  and you will see multiple examples of this—higher sea levels accounting for worse storms and surges.

Later it was stated: "The evidence is indeed piling up that climate change is no longer something that is happening in future decades, and everyone's eyes are glazing over as the scientists are talking about it,"

And can we blame them for the eye glaze? This statement on the Sandy surge is particularly damaging because it dilutes the true message on global warming. It just provides fodder to those politicians who do not believe in science.

Here is some background on this issue.

The height and extent of a storm surge (which means higher than average waves and tides hitting the beach that bring unusual amounts of water onto the land) is determined by several factors:

1) The strength and direction of the wind. This creates a wind driven surface current that adds to whatever was going to flow in that direction. A first guess is it adds a current of about 3% of the wind speed (but at these high wind speeds, the factor is more like 2% according to recent research), not to mention the dominant factor that strong winds build huge waves. Related to this is the fetch of the waves as they build offshore. A big storm can “trap its fetch” and bring much larger waves than a smaller system that is moving diagonal to the beach.

2) The tide height itself. This is a bit circular, because in a sense surge is unusual tide height, but clearly if a storm hits at high tide it will have a larger net affect than if it hits at low tide. On the other hand, a long-lasting, large storm will inevitably hit at one of the high tides of the day.  If it hits at a time of month that has a high tide to begin with, i.e. new or full moon near a solstice in many parts of the world, then you start out with high water, and it takes less extra water to go over the barriers.

3) Low atmospheric pressure adds to the tides. This is called the inverse barometer effect. It was known to mariners in the 1800s, though they did not know the cause. We cover this interesting affect in The Barometer Handbook. It adds 10cm of tide above the average tide for every 10 mb of pressure below the average pressure.

4) And there are other smaller affects that contribute, such as prevailing offshore currents–if an anomalous current eddy happened to be offshore, it could drive notable amounts of extra water into the region. And indeed the height of the sea level can matter as well.

But this is the main point. She says the Sandy surge was much higher than it would have been in the sea level of a "non-climate changed world."  What does that mean?

Let us say that means 100 years ago, when the average sea level off of NY- NJ was about 1-1.3 ft lower. The peak water level at NJ was 9 or 10 ft, depending on location, which was about 4 ft of predicted tide and 5 ft of storm-induced extra water (surge). That extra foot of average sea level had very to do with the magnitude of that surge at a particular time. Furthermore, the surge though routinely referred to as a record high for the area was not really that far off of what they have had before, just a little ways down the coast in 1962 (Ash Wednesday Storm, 7 ft water level in Atlantic City, 9 ft in Norfolk VA). The mid Atlantic also had high surge in a 1956 storm. Had these earlier storms had properties like Sandy they would have set records that Sandy did not match.

The point is, the high surge in Sandy was not due to a climate-changed higher average sea level, it was due to a bad storm hitting the beach in conditions that could have happened anytime in history–the only historical difference is Sandy was remarkably well forecasted many days in advance, whereas the terrible Ash Wednesday Storm was not anticipated just a day or two before it hit.

It was not even unusual tides in NJ at the time, contrary to a lot of reports in the news. The high tide was more or less normal. A few weeks different timing and the tide could have been 1 ft higher than it was–clearly ruling out a 1 ft of sea level change as the key factor. Or, had the landfall been 6 hours earlier or 6 hr later, the tide would have been 4 ft lower, with dramatic reduction in effects, again a major influence on its surge intensity totally unrelated to the height of the sea level.

Not to mention the pressure. Sandy did indeed set low pressure records for the region, getting down to 945 mb or so. The mean pressure in Oct for that region is about 1018 mb. Thus we were down 73 mb from the normal, which implies 73 cm of tide. So the pressure alone added some 2.4 ft to the surge.

There have been other storms with very low pressures that reach NE waters, but they usually curve the other way, and head out to sea to wreak their havoc there. The bad luck in this case was an upper air pattern that turned the storm to the left instead of the right. That had nothing to do at all with higher average sea levels.

Here are some pictures to document the notes above.

The storm came ashore at 00z on Oct 30, seen in this document from NHC.

The wind speed and direction offshore on the approach was documented  by an OSCAT satellite pass. Notice the onshore component and huge fetch to the NE. 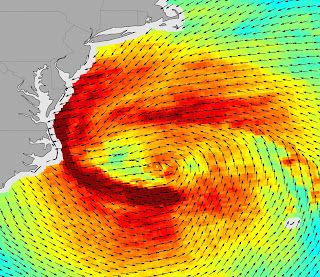 Here are the average sea level pressures over the NE in October from The Barometer Handbook. 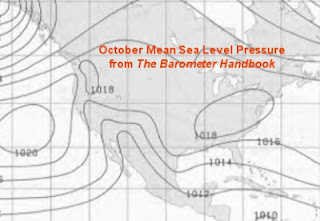 And the standard deviations from these pressures in October. 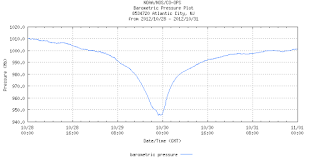 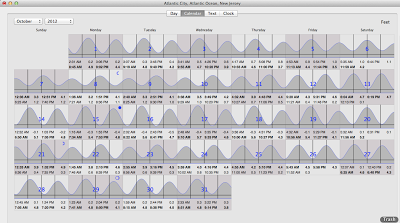 The actual tides at the time in the area along with the predicted normal tides are available online at the NOAA/NOS CO-OPS site, which has interesting data for several applications. The green curve is the anomalous component (observed minus predicted) that led to a storm surge. 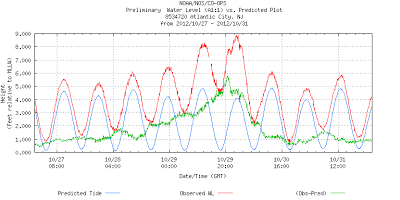 Here are the NOAA records of the rising sea levels due to global warming. 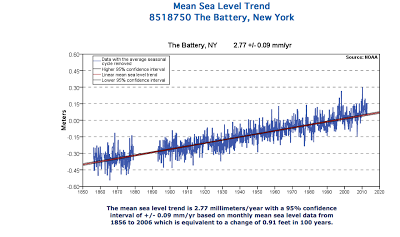 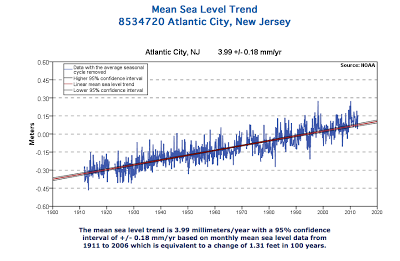 I must stress very clearly that global warming is obviously causing the sea level to rise, and this rise could accelerate with time, and we should be more alarmed about this than many are. It will sink atoll communities, and flood major cities, maybe during this generation.

And indeed, we will see more severe surges and flooding with time because of this. Sandy dropped some 8 to 12 inches of rain on this community, which contributed to much of the damage caused–presumably the "more intense" aspect of the surge referred to in the NOAA quote.  This will  happen on a more frequent basis in the future, not just because of the sea level rise, but also because there are likely to be a higher percentage of intense storms in the future, just as there will be more droughts in other parts of the world.

We must be aware of this and take actions to prepare for it.  But we most definitely do not further our cause by making claims for evidence that is not appropriate. There is plenty of unambiguous evidence to look at.

Indeed, if we assume the tides were about the same 100 years ago–I don't know if that is true or not–then this sea level difference could have enhanced this particular maximum water level by some 10 to maybe 20%, depending on how you define surge and depending on what the actual sea level looked like at the time. It is not uniform in time nor space (compare NY and NJ data above). Recorded data are just the annual averages.  But I still believe that implications of statements like this run the risk of doing more damage than good.

And here is one final caveat to consider. "Surge" is most reasonably interpreted at the rise of the tide above the predicted values. The predicted tide heights are based on the known average sea level at the time. Therefore, by definition, sea level cannot have any influence on surge at all. Higher sea level just causes the high water of the normal predicted tides to gradually get higher with time.  In short, intelligent, useful conversation on these topics will require more specific terminology.

It would be interesting to look at a plot of the maximum high tide over these last 100 years–a number we can all understand and interpret properly–rather than average sea level offshore, which is a much more complex concept.  It is rather like comparing the phone book, whose data are right or wrong and easy to check, to the Bible, from which you can prove whatever you want.

Thanks, David! This discussion helped a lot, coincidentally, with some other discussions here in Seattle yesterday after Alki and Golden Gardens were temporarily submerged for similar reasons.

Thanks Robert. We did follow up with our own mini surge. http://davidburchnavigation.blogspot.com/2012/12/a-local-mini-surge.html

It is clear that the analysis of any of them is the same.