We have several links in this blog and elsewhere that describes the importance of ocean currents on any low-powered craft crossing an ocean.  This factor is even more important than we had realized just a few years ago. New satellite data and enhanced ocean models have shown that there are numerous mesoscale eddies (30 to 300 nmi in size) that can have remarkably strong currents, up to 5 kts in extreme cases. Thus to do the best we can in ocean navigation we need to learn as much as we can about the ocean currents.  It is not just the Gulf Stream where these things matter.

Near US coastal waters we have the HF-radar measurements, which remain the primary source of data in those regions, but in the open ocean we must rely on the interplay between isolated rare measurements of actual currents from buoys (drifting and fixed), combined with extensive satellite measurements of sea surface heights, all folded into some numerical model of the ocean’s motion as driven by actual winds, also measured by satellites (ASCAT, OSCAT), along with global models of the weather patterns (GFS, ECMWF).

There are several ocean models in use whose data are available to mariners underway. For now I just want to compare some that we have looked at over the past week or so. My main reason for presenting this is so we have the examples in hand that can be viewed by the experts, so they can  guide us onto the best path. I must confess no real knowledge on what is the best possible approach.

I do know that one model has forecasted an eddy that we can definitely see the effect of at this moment on the rowboat JRH west of the Cape Verdes. That alone is plenty of encouragement to keep on trying to learn more.  In fact, there is an even much larger eddy one week in front of this boat, which will be another test.

We have been using data from the Hi-Res Atlantic RTOFS model, updated daily at 16z, with the vessel position overlaid on the current forecast pages (the work of Angeline Pendergrass).  We get this data by a custom procedure that is not a public tool, but I have just learned that there are several public tools for getting related data underway. Both work well and both are free services provided by their authors. There are also several commercial products available, one of which we have access to and can compare.

The goal now is to compare these sources of current data for specific times and places, as well as provide references to where mariners can obtain this data on their own.

The following pics are RTOFS foreasts for 00z on Feb 10, 2013 for a small region west of Cape Verde. The top is from the data set we are using (Hi-Res Atlantic RTOFS) which is where we were warned of the upcoming eddy. We do not have specific current measurements underway due to a missing component of our data stream, but we have convincing indirect confirmation from much enhanced speed made good that correlates with the eddy location. In fact, at one point recently the vessel was on sea anchor in 20 kts of NE wind, making good a drifting course to the NW of almost 1 kt. 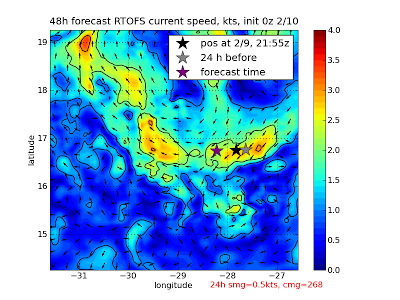 Below is the same model data but looking a bit more forward on the same date, followed by the same predictions from another source. 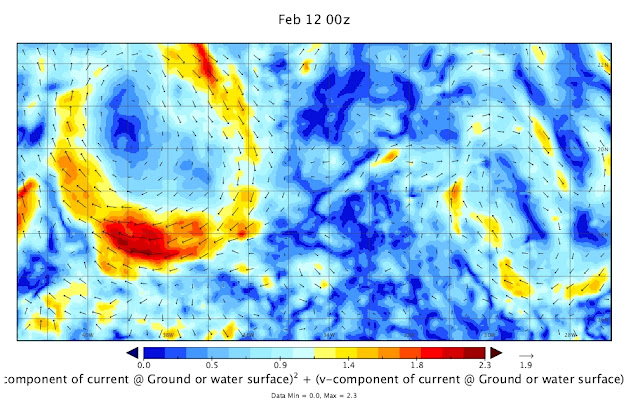 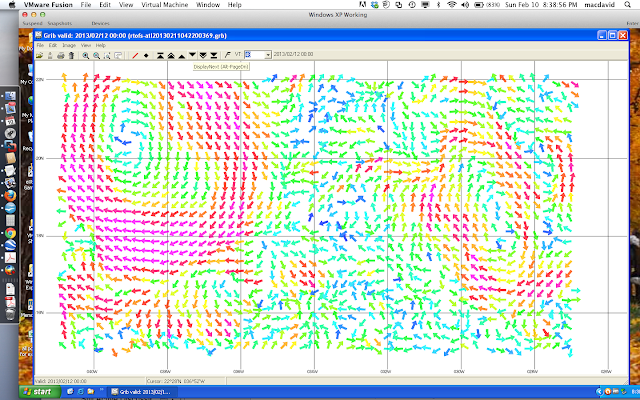 The boat is now located in the patch of the small eddy in the bottom right of this picture. This had been much stronger current, but it is now weaker though still predicted to be 2 kts to the SW. Some miles ahead we see a much bigger eddy that has patches of 5 kts of current predicted.

Both of the above pictures have been downloaded and processed by the OARNW team. The data are readily available, but these pictures take some manipulation to produce. It is not public service.

Below are data from a similar model (RTOFS Atlantic vs RTOFS hi-res Atlantic, used above) which are readily available to mariners underway from the www.saildocs.com program. They can be requested from within the ViewFax Grib Viewer (Ver. 5.0.56), which is the work of Pacific Northwest sailor Jim Corenman.  The free program is available at www.siriuscyber.net/wxfax This is the GRIB Viewer that is used by SailDocs, familiar to many mariners for viewing model wind forecasts and weather maps, obtained by SSB or SatPhone underway. The system is very nicely organized for data selection and for trimming area and resolution to save air time in downloads.

This sample covers the same region as above. He offers the data every 12h for 5 days. This is plenty fine enough temporal resolution for most applications. When using the program, be sure to crank up the resolution to the  highest available.

To illustrate this best, we show here all 10 pictures so you can roll through them to see the eddies move. Just click anyone open to get into the blog picture folder then mouse scroll though them to make a movie. There are clearly huge currents here, but i do not have a color code made yet.  The purple is 3 to 5 kts, reds are 2 to 3 kts, yellows about 1 kt. 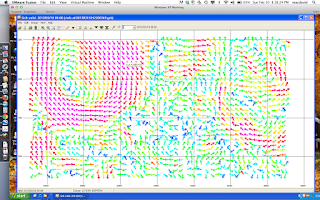 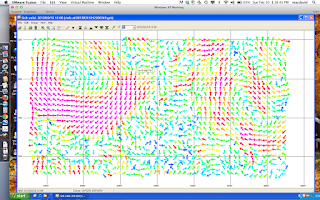 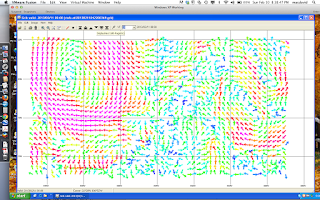 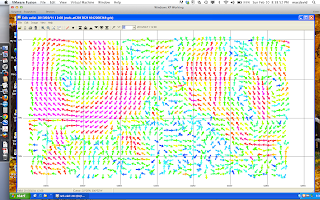 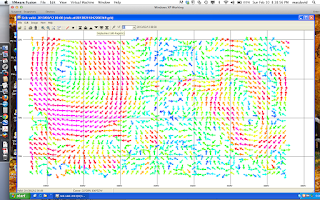 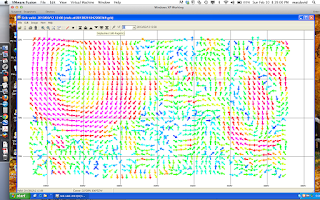 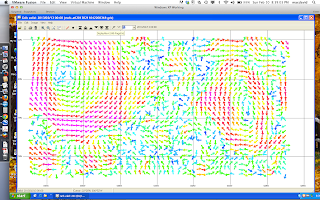 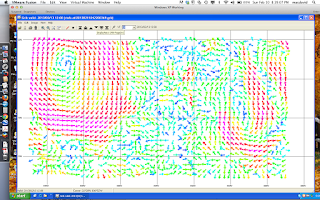 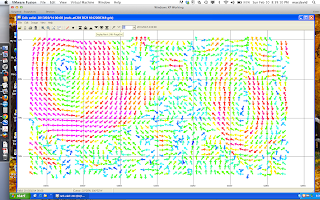 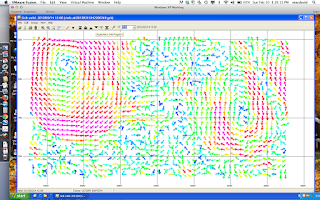 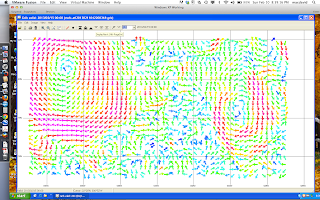 We have also just learned of another way to obtain  ocean currents forecasts on a global scale when underway, and that is with the Ocean Model OSCAR. Another Pacific Northwest sailor has made these data available to us at www.svsarana.com.  He has designed the system to match the saildocs procedures, but this data and serivce is completely independent of saildocs.  The procedure to get these files by email request is described on the SV Sarana website. In principle a GRIB file could be viewed on any grib viewer but the various ones that are popular are not always compatible. The OSCAR data from this source work fine in the ViewFax grib viewer.
same one used to view the above data.
The OSCAR model is run once a day, but it is each time an average over the past 5 days. We are not sure yet what the significance of that is. The RTOFS data certainly implies the currents are more complex than we would want to average over, but we do not yet have enough specific confirmation  that the predicted details of the RTOFS are validating. So far we just know that there is definitely strong current in the location and direction predicted.

The picture below is for the same location, but instead of looking ahead 2 days as we have done above, this one has to look back and tell us the average over the past 5 days. After having watched the RTOFS eddies for the past 2 weeks fairly carefully,  I am  surprised  they do not match better on the 5-day averages. The RTOFS eddies have been clearly persistent for 5 days.   It could be i am not getting the OSCAR data properly. These are also also grib data, so we can move the cursor around on the plot to ready current speed and there is rarely any over 2 kt on this picture.  I will take then for the next few days and add them below.

We have to study this more. There is one note on the OSCAR website that they have optimized the model for the Tropical Pacific.