This is the first step toward revising our 2013 article on this topic.

NOAA has announced the sunsetting of all paper charts and the associated raster navigation charts (RNC) beginning at the end of 2024. In short, starting sometime in early in 2025 we will all be using electronic navigational charts (ENC) and the new NOAA Custom Chart NCC printed versions of the ENC.

Starpath has made a custom link that is easy to remember that takes you to the place you can download free echarts in either the ENC vector format or in the more accustomed graphic RNC format, which are exact images of the paper charts.

If you are new to echarts you might not have a program to view these with, but there are several excellent free options available that can be used either permanently or until you choose a specific commercial version.  Also even if you do not intend to use ECS (electronic charting system) for your own primary navigation, these days it is only prudent to have all the charts you might ever need at hand as a backup. Even not using them for primary underway navigation, they are still the best way to layout a safe route, which can then be transferred to your active GPS via a GPX file. 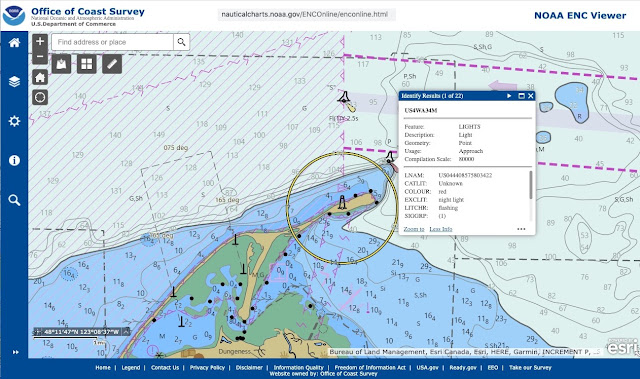 There are hundreds of computer and tablet programs that display echarts in some form and also accept a GPS signal for moving map navigation. Together this is called an electronic navigation system (ECS).

To clarify our shortlist amongst these hundreds, we have these criteria:

(1) Must show either or both official RNC and official ENC.  A large number of these commercial ECS use third party vector charts that they produce themselves based on the official charts. These can be quite good and the products cost effective, but they are not included here.  A popular example of these would be the many Navionics products.

(2) Must be truly free, not just a temporary demo. Most all of the commercial products include some free demo period that serves to show the unique features they offer, and indeed it is worth checking out a few contenders. Prices range from $50 to $2,000 or so, with several popular products in the $300 to $500 range (Coastal Explorer, Time Zero, WinGPS, to mention just a couple we are familiar with.)

(3) Must be stand alone product for PC or Mac or mobile device. Thus we do not count several online viewers, notably the NOAA viewer for ENC and their NOAA viewer for RNC. Click the (i) icon on the ENC viewer to get into a cursor pick mode... either for a spot or region. These are essentially the same viewers we see at their chart selection options (see starpath.com/getcharts).

In the original 2013 version of this article we had a list of over 20 products, and for now I will just leave these links here at the end, many of which are defunct. Two popular ones, Fugawi and Polar View, ended support in 2019. Memory Map Navigator is still a fine product, but no longer has a free version—we used Memory Map for very many years in our courses, before the time that OpenCPN developed. Memory Map was one of the first ever echart programs, in that it formed the basis for what is nominally the first one from MapTech, years ago. The other few left on the list also no longer have a free version.

In these old days, the free versions were often called "voyage planners" in that they would show the charts and let us set up routes and so on, but no live GPS. These seem to be gone now—I suspect largely pushed aside by OpenCPN and qtVlm, which have become such a powerful programs.

For now the shortlist that meets our criteria is so far:

(1) qtVlm  is an amazing full function free navigation program, well documented,  with many sophisticated features including optimum sailboat routing, tides and currents, Gribbed weather and ocean forecasts download and display, and georeferenced graphic image import. Its interface and presentation of the ENC objects and attributes is one of the best. There is Mac, PC, and Linux versions.

The name "qtVlm" comes from Vlm standing for Virtual Loup-de-mer, which is an online sailboat racing simulator that can be used to participate in actual live races, such as Sydney-Hobart, Transpac and many other global races. There are over 12,000 participants. The "qt" part means it is developed using the Qt cross platform software tool—as such, I believe the convention is to pronounce this "Cute VLM." 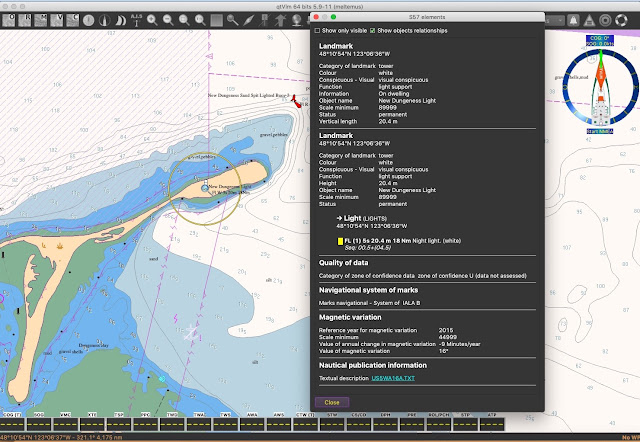 (2) OpenCPN is a full fledged navigation program for both Mac and PC, plus Linux and Raspberry Pi, although some plugins are still PC only. It shows RNC and ENC and does a good job on the ENC presentation, but there are still a few minor things that are not quite standard, some intentionally so. 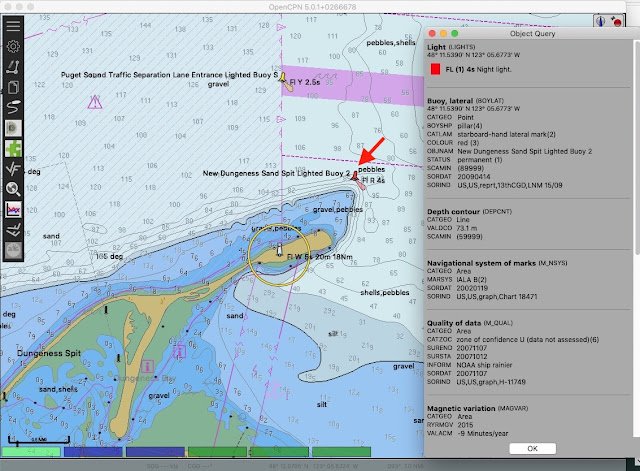 (3) SeeMyENC  offers A standard display is seen in this product from  Sevencs.  This is not a navigation program and it will not show RNC, but it does show all the S-57 objects and attributes of the ENC along with an chart viewing interface that is essentially ECDIS type compliant. The German company Sevencs is a world leader in both charting software and chart production. 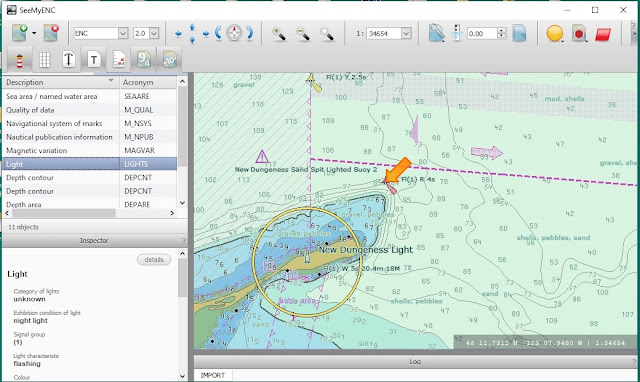 (3) Win GPS ENC Viewer  is a free program from Stentec in the Netherlands. It includes unique links to the inland ENCs of European waterways which are also free product, although their coastal ENCs are not free. 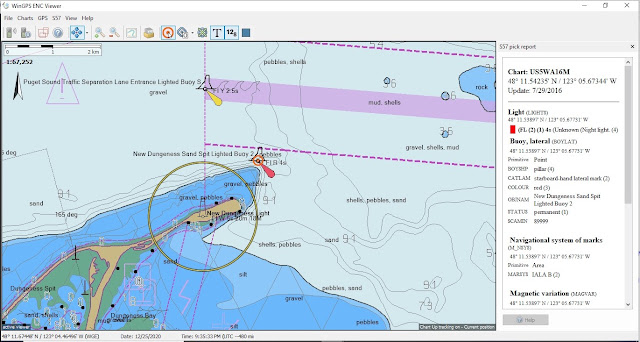 Sample ENC viewed in Stentec's Win GPS ENC Viewer
Below are links from the original 2013 version of this article. I will come back to check these and finish this new version. Most of these are gone now, and since then we now have our book on ENCs. We can also discuss then the Caris product called Easy View that meets our requirements, but has rather a steeper learning curve. It will show both RNC and ENC, but is more oriented toward investigating the structure of the ENC file itself than a navigation chart resource. 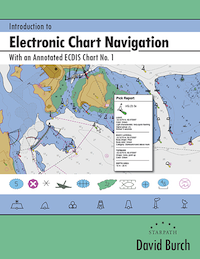 There is also this list and note at NOAA (in 2013), which is directed toward ENC software, but there is no reference to free or demo. This old list was from NOAA at that time. They no longer have this long list and all of these need to be checked. The following note from NOAA was included:
"The following corporations/organizations offer a number of charting related products that may provide useful important information. This listing is provided as a public service for information only and neither the Office of Coast Survey nor the Government endorse any of the products or services provided by these corporations/organizations. Please note the links connect to Web pages outside of the Office of Coast Survey Web site."


Systems that use ENCs

Thanks very much David for your helpful blog.

I had a few questions for you:


I just tried downloading a chart from NOAA and its extension is .000 I tried to download OpenCPN and open the chart but it didn't open. Any tips?

I was also wondering if anyone has tried to download a chart, convert it into a file format that a print shop can print, and then get it printed out?

Try using the OpenCPN chart downloader option. As for printing, US NOAA charts are available as pdfs which can be printed. See https://www.starpath.com/getcharts

Thanks so much, David! Before, I didn't realize there were pdf versions, that saves me lots of work.

David, great blog comments. I am fussing with the ENCs/RNCs on OpenCPN..and looking at what the differences are for on the water features..(eye opening).and the fact paper (RNC) are being phased out (five years..but). Most commercial apps (on chart plotters) are not updateable via the web, and the cost of updates (300.00 plus for some cartridges) makes the plotter updates not very feasible. So back to the apps, like OpenCPN and others. In the past I did terrain software, and even helped with user manual for MaxSea in a previous life. I do know the tools, terrain mapping and such.

Found AquaMap..which also provides the USACES survey data..which covers areas the ENCS/RNCs may not have. Are you familiar with that one? Thoughts? Since it only works on IOS and Android, have to load small files to work with, not like my workhorse systems with terrain apps (RATS).

Nice write up..and as RNCs are phased out..mariners need to look to the electronic future with their purchases..

Great intel and info. Thanks

Wow, thanks for the detailed info, David!

Georg, see any one of several links at www.starpath.com/getcharts You can make a high res pdf or download one from them.... or just capture the screen if that is all the larger you need.

Hello Mr. Burch,
I have tried using the NOAA ENC on line version to facilitate use of the ENC's. When I open it, I get a message box that says" the layer ENC cannot be added to the map". I shut the box and I have it open, but it is limited as to what I can use, like the tools, and layers, etc. Maybe the site is down at this time? Have you or any one else run into this issue?
Thanks,
David Kernion, pass Christian, Mississippi...La. Ms inshore and off shore angler.

To David K: I just posted a video on this function, which you can see here:

PS... to all. I should add that we have now opened up our new course on the use of ENC, which includes our textbook on the subject and a full functioned echart nav program. See full details of the course at:
https://www.starpath.com/catalog/courses/1926.htm

Hello David,
Thank you so much for your reply. And a great video reference as well.However, I am still faced with the message box statement I referred to in my earlier comment. I believe that something either in my browser(Modzillo FIrefox), or Windows 10 is not allowing the NOAA site to download the charts to the background that opens. I am working from a dell laptop. Is it possible that the site is down at this time. So a simple question, can you open it up at this time?
I have tried contacting NOAA but I run into the same problem if trying on the computer. . I have also left a message at the main NOAA site by phone. We will see how that goes.
It is very frustrating as I can't even get to the spot you start your discussions on.
Have you used the Caris Easy view program that NOAA refers to?I have not downloaded it yet as I want to make sure that it is not a sham.
Thank you for your time.
Kind regards,
David K.

David K. The NOAA site seems to be down at the moment. You can report this to NOAA using the link at item 17 of www.starpath.com/getcharts They will definitely respond if you go that route.

Caris Easy View is not easy! Better to use SevenCs SeeMyENC or use qtVlm for an interactive pro level ENC viewer.