"Swirls" — An Introduction to ENCs, and Why We Like Them

As you may know, at the end of 2024 NOAA will have completed the demise of all paper charts and the associated RNC echarts. We will all be using ENC by then, both in the echart format and in the new printed ENC format, called NOAA Custom Charts, NCC.

With that in mind, whenever we see a charting question arise in class that brings to mind the use of ENC, we jump on it,  and this is such an example.

The latest version of paper chart 18465, Eastern Strait of Juan de Fuca,  has on it a notation "swirls" near 48º 12.3'N, 123º 16.2'W. Following standard chart practice, you would turn to Chart No. 1 to learn what this means, but you would not find the word "swirls" in that booklet, which we can confirm with a search of the PDF version.  This is not a new chart notation on this chart. It was there in the 90s and likewise in the 90s it was also not in Chart No. 1.

We will be right if we guess this is related to spinning water or eddies of some form, but we still like all symbols and abbreviations on the chart to be well defined—as indeed most are; this is an anomaly.

In the age of ENCs, however, we have another way to see what this might mean. We start by looking at the same spot with both the latest ENC and latest RNC as shown below. 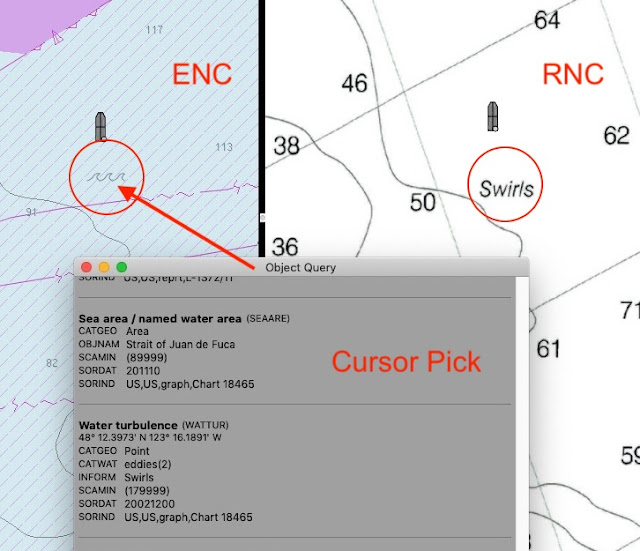 This view is from OpenCPN with the dual screen option. ENC on the left and RNC on the right set to the same scale, 1:21,300. (You can view the same thing in qtVlm, switching between vector and raster.)  Also shown is what ENCs call a "cursor pick," meaning I click the object (wave icon in this case) and up pops a list of the charted objects at that point, along with their individual attributes. We get nothing, of course, when we click any point on the RNC, as that is just a static image of the paper chart. In contrast, every point on the ENC brings up at least one object, and usually many.

Here we scroll the list to show just two objects, SEAARE (sea area), which is the Strait of Juan de Fuca, plus the subject at hand, the object WATTUR (water turbulence). The wave icon on the chart is the symbol for WATTUR. it is defined as: "The disturbance of water caused by the interaction of any combination of waves, currents, tidal streams, wind, shoal patches and obstructions."

Every object on an ENC has a 6-letter abbreviation, and although the official IHO display standard (S-52) discourages the use of abbreviations in favor of the plain-language names, our own experience is the abbreviations can be useful for communication, so we are glad to see OpenCPN include them. Here is the presentation of this object in an online S-57 object catalog from Russia (S-57.com). There is also an excellent US-Canadian version from Caris, but its URL is not as easy to remember! 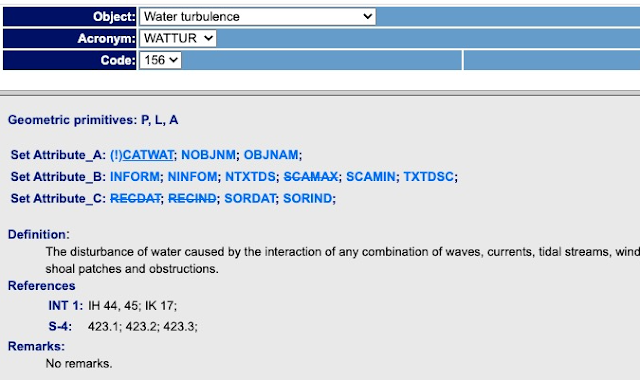 Each object has in turn a set of attributes that describe the object, which are outlined above.  These attributes also have a 6-letter abbreviation, which could be confusing, but in practice once we get used to using ENC and the related terminology, it is not an issue.

Type A attributes are actual characteristics of the object; type B are relevant to the use of the object data; and type C relate to the sources of the data. Crossed out ones are no longer used. Underlined are mandatory for every example of that object.

We come back to the other information on this screen, but now just note that this object has attributes:

CATWAT (category of the water turbulence),

OBJNAM (name of the object), such as famous "Liddel Eddy" in the Orkneys,

SCAMIN  (the minimum scale that shows the object on an ENC), and the last one we cover here,

Object attributes are often categories, such as CATWAT, listed above, which can take on the values, which are defined in either of the two online object catalogs mentioned: 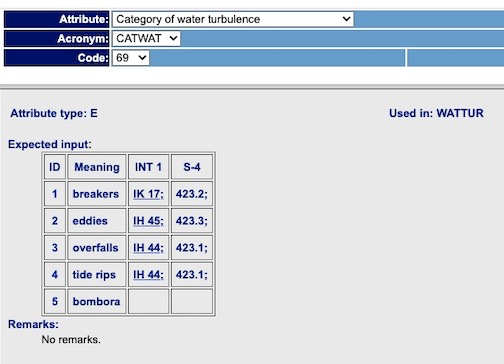 These categories are defined as:


1. breaker: a wave breaking on the shore, over a reef, etc. Breakers may be roughly classified into three kinds, although the categories may overlap: spilling breakers break gradually over a considerable distance; plunging breakers tend to curl over and break with a crash; and surging breakers peak up, but then instead of spilling or plunging they surge up on the beach face. The French word 'brisant' is also used for the obstacle causing the breaking of the wave. (IHO Dictionary, S-32, 5th Edition, 540)

2. eddies: circular movements of water usually formed where currents pass obstructions, between two adjacent currents flowing counter to each other, or along the edge of a permanent current. (IHO Dictionary, S-32, 5th Edition, 1560)

3. overfalls: short, breaking waves occurring when a strong current passes over a shoal or other submarine obstruction or meets a contrary current or wind. (IHO Dictionary, S-32, 5th Edition, 3631)

4. tide rips: small waves formed on the surface of water by the meeting of opposing tidal currents or by a tidal current crossing an irregular bottom. (IHO Dictionary, S-32, 5th Edition, 5494)

5. bombora: a wave that forms over a submerged offshore reef or rock, sometimes (in very calm weather or at high tide) nearly swelling but in other conditions breaking heavily and producing a dangerous stretch of broken water; the reef or rock itself. Also called bumbora or bomborah. (Australian National Dictionary)

Referring back to Figure 1, we see that the cursor pick reported CATWAT = 2 for eddies, but then we see the interesting note that INFORM includes the single word "swirls," which is indeed intended to link this ENC symbol to what is on the paper chart.

I can't really say "in short" after all that, but we can get a glimpse now of how an ENC can provide more information about charted objects.  On the paper chart, we see the word "swirls" only, and that word is not in the main reference Chart No. 1. In passing, it is also not in the more fundamental IHO charting standard called S-4 (Regulations of the IHO for International Charts). Nor is it in the IHO Dictionary, S-32.

In this case, that one word is all we get in INFORM, but it could hold up to 300 characters of information and tell us more, such as what stage of the tide it is most pronounced, and so on. The attribute TXTDSC (text description), will generally include any notes from the US Coast Pilot about this object. This is the way that ENC puts chart notes near or on the objects they describe.

You could say that this is a lot of work to learn that swirls means eddies in this case, which we might have guessed, but it could also have been tide rips, but that is not really the point here. Here I just want to use this as an introduction to how ENC data are presented as we transition into all ENC in a couple years.

With that in mind, let's look at one other detail. In Figure 3 from an online object catalog we see that in this presentation of the attribute CATWAT we are also given the corresponding paper chart object locators. "INT 1" refers to the US and other national Chart No. 1 documents; the S-4 numbers refer to the IHO S-4 document linked above.  The S-4 presentation is shown below,  followed by the Chart 1 presentations. 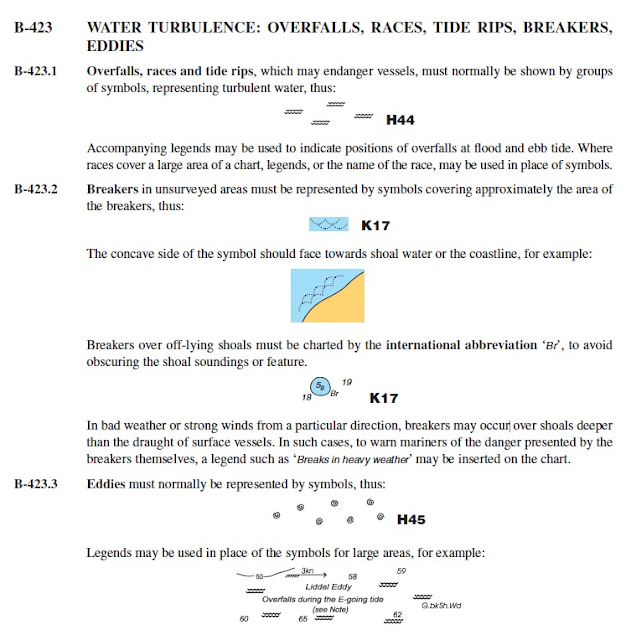 Figure  4.  Chart symbols according to S-4

Figure  5.  Chart symbols according to US Chart No. 1

This is just another way we can correlate ENC symbols (new to some mariners) with the paper chart symbolism we are accustomed to.