Last year we posted a note here about an unexpected small rise in barometric pressure as a severe squall passed over a boat in the Caribbean (Local Pressure as a Squall Goes By). The article served two purposes, it documented that unexpected behavior and in doing so demonstrated the value of a having high quality precision barometer on board.Today, we get to carry on with that story, but with more data.

It started with a bike ride home from work, with just enough drizzle to put on rain pants. Ten minutes later however, the wind was at least 25 kts, gusting to 30, with rain heavy enough to reduce visibility to about 200 yards for a short time... not to mention an excellent test of good rain gear. This was an honest to goodness tropical squall, which I have seen many times underway... actually it was not at all a "tropical squall;" it just behaved like one.  See Cliff Mass explanation of the system.

After dinner and much banter about the unusual likelihood of such a squall here in Seattle, I happen to notice the trace on an accurate barometer I have at home. Screen captures are shown below.

We can look at real times since this barometer has an accurate clock.

The new data here is some documentation of the squall as it also passed over the Atmospheric Sciences Building at UW, which has several fine instruments on the roof, as well as a precision barograph inside the building.

In the earlier note, linked above, we speculated that maybe there was some brief pressurization of the cabin on the boat where the barometer was located, but now there is clear question about that interpretation. Namely the environment of this instrument was rather different from the boat, and also we now have the UW data (below), from an entirely different environment.


They see the same bump about 5 min later, and about half the intensity, rising about 0.4 mb.  For what it might be worth, my guess is the squall was less severe when it got to UW, which is about 5 mi east of here. I say this because we have the data (below) from their measurements, and I was right in the middle of this one, on a bike, and have some experience in the observations.

But they did indeed have a lot of rain, but this is much harder to gauge by eye to make comparisons. I would guess what we had here for a brief time was violent rain.


So in conclusion, we have clear proof of a squall and some estimate of its severity (there is likely other data on this as it was an unusual event) and we have two independent measurements of the pressure bump, in rather different measurement environments.

Now we just have to figure out what caused this... though there is no doubt that with a good barometer you learn things you would not otherwise.  For example, we can see very nicely on my home barometer  the local pressure variations that lead to the sea breeze in Puget Sound on a warm clear day. Later I will write up how racing sailors can use this information to predict the wind while underway in a race on Puget Sound.

PS... it is a bit difficult to tell what took place at West Point Lighthouse because they only record data hourly... but there was definitely some larger scale system in place over the region, which we will have to look up.  The Lighthouse data is shown below, with the corresponding pressure trace from my barometer.

At the office we have several accurate barometers that store data, so I checked one to see if we still had detail enough to see the bump, and sure enough we see this just fine, as shown below. 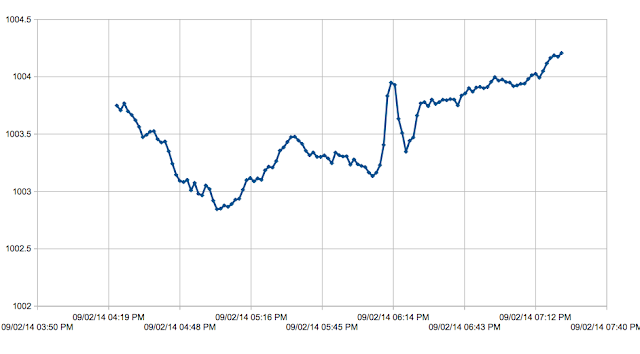 This illustrates three  points.  One is we have still another completely different environment of the instrument during the measurement, so this seems to imply this might not be the factor.

And second, it seems we may have a real meteorological effect here to understand. We need to rig up our Gill Pressure port, and have this set up outside for the next squall to remove all such influences.... unfortunately (in this regard) Seattle has only some 4 or 5 squall days per year.

The other important point to observe is the great value—for research and careful foreacsting—of a barometer that can store digital data and then transfer it to a computer for archiving or further analysis. There are several units on the market that will do this, and some phone barometers can export the data as well. The barometer in the Kestrel 550 hand held wind meter, for example will even blue tooth high precision barometer data to a phone or tablet. This is a rapidly changing technology and high precision barometric pressure is now readily available.

In the above example, 24 h ago, this bump was just barely visible on the crude display screen of the instrument itself, but we could just connect it to a computer with a USB cable, export the data to a spread sheet and plot it. The whole process took just a few minutes.

See another strange barometer bump discussed at this link http://metbob.wordpress.com/2014/09/30/barographs-detect-shock-waves

yes , a Cumulonimbus cloud can be thought of as a combo High/low ying-yang and can cause a 2-3 hPa barograph blip as it passes.