There are numerous tactical uses of barometric pressure for safe efficient navigation, but here we take a quick look at just the basic one of using the barometer to anticipate strong winds.

In the picture below we see a classic case of wind rising with a pressure drop. We show this on the very nice combined display of wind and pressure shown on the NDBC websites, in this case for West Point Lighthouse (WPOW1), which is 1.6 nmi to the SW of Starpath HQ.

We see wind going from 5 kts to 32 kts  in 9h... and in the first 6h of that it only went up to 15 kt, so really this is 15 to 32 in about 3h.  This is something we would like to be prepared for as soon as possible. That 6h of watching the wind go from 5 to 15 is all wasted when we do not have a good barometer that could warn us that this wind increase could keep going on.

But even with a good barometer we still need a guideline to interpret what we observe.  Our guideline is "4-5-6," meaning a drop of 4 or 5 mb in 6h is the sign to pay attention. This implies an average tendency (change in last 3h) of  -2.0 or more.

Shown below the NDBC data, we have plotted the pressure tendency measured  with a high precision NIST-traceable barometer here at Starpath.  The scale on the left is pressure change in mb over the previous 3h.  Looking above that to the pressure data, we see a drop from Point A (where the tendency first crossed 0.0) to Point B, marking 4 mb drop. This has dropped enough to keep an eye on, but not enough to conclusively trigger our 4-5-6 guideline because this took about 9h.  After this point, however, you see an average tendency that is close enough to the 2.0 we need for a solid warning.

In other words, by the time of Point B, we should be fairly warned of strong wind potential.  Thus we have (from B to C) about 18h warning that the wind we have watched increase to 15 is likely to increase notably more. Once we get to a tendency near 3.0 for a couple reports, we are beyond the forecasting zone; the strong wind is likely either imminent or present.


To help mariners take advantage of the accurate pressure measurements, we show below the pressure trend arrow conventions we recommend to all  barometer mananufacturers.  These offer a quick graphic view of the trend, which are scaled to match our strong wind warning guideline (4-5-6). The definitions are shown below. 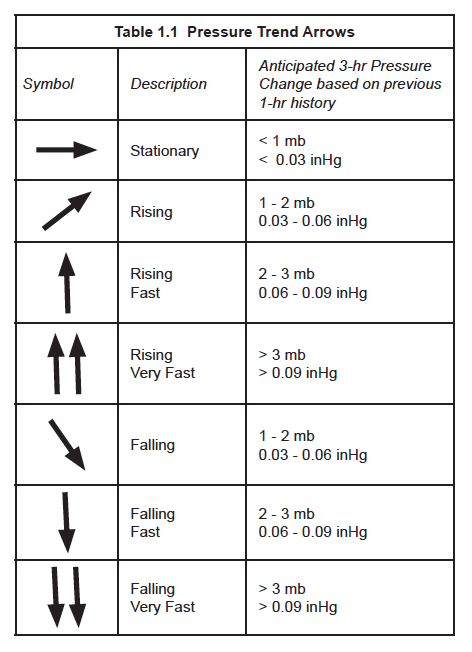 With these definitions, keeping in mind our 4-5-6 guideline, we can make a shorter summary. 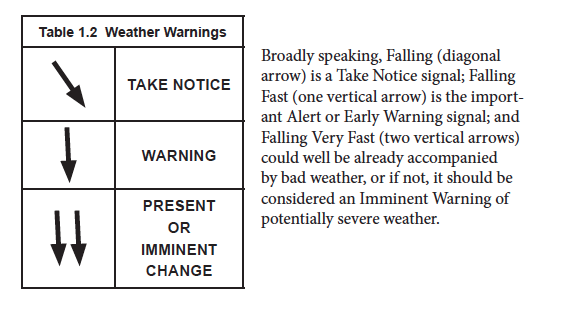 These arrows should be updated continuously on the dial face after the unit has been running for 1h, and with these we can anticipate the drop over the next 3h based on a projection of what we learned over the past 1h.

Note that the actual pressure tendency value that should be recorded with each pressure record is rigorously defined by the WMO and NWS as the pressure difference between now and 3h ago, so this value cannot be deduced until a barometer has been running for 3h or more.

The drawing below shows how these arrows would have shown up as the pressure dropped. 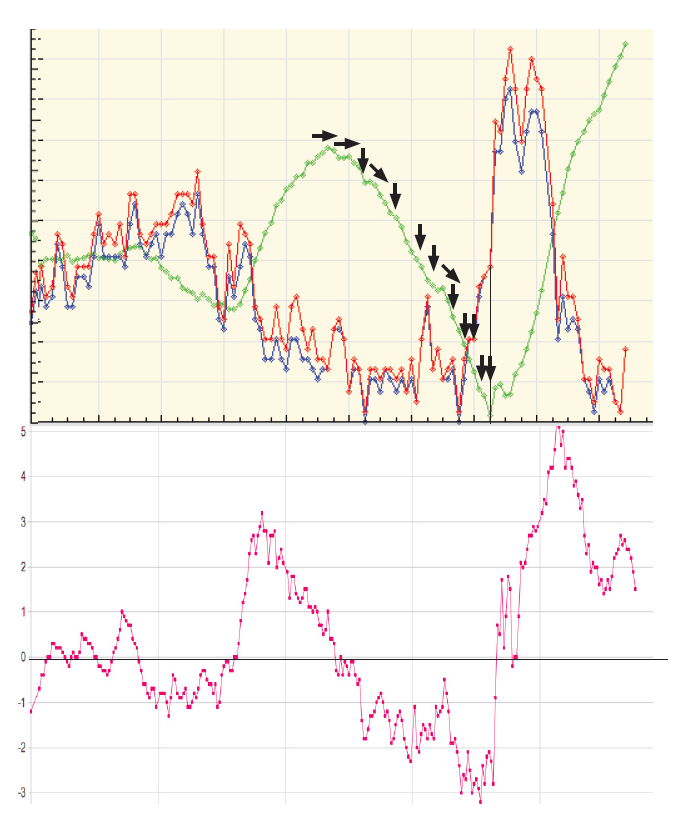 Notice that the arrows would change during the short periods when the pressure flattened off during the drop, but the Fast Drop indicating real warning would dominate in this pattern.

Another point to stress is the pressure warning guideline assumes the wind is starting from light air. When the ambient wind is over 15 kt or so, as in the case to the left of this time period (3 days earlier) the guideline is not useful.  In the open ocean, when the wind is above 15 to 20 kts to begin with, a rise in pressure often brings with it an increase of wind—most famously in the "sting of the scorpion's tail," which is the poetic description of a back bent occlusion.  We see this behavior in the left-hand data for completely different reasons, but we are on inland waters here, effectively between two mountain ranges, so any standard pressure-wind forecasting can vary notably.  Our guidelines were developed for the open ocean, but they are nevertheless a good guideline anywhere.  As it turns out, the behavior seen here for this larger pressure drop is a fairly good example of what we might experience at sea.

In the pictures below we compare what we measured at Starpath  compared to what we downloaded from the WPOW1 website. That instrument is located about 0.5 nmi form here.  The agreement is very good. We actually have much more data in finer steps stored in our barometers, since we can only get data hourly from the website.  Thus even with Internet access to this excellent data from the NDBC websites around the country, we still gain more resolution and earlier warning if you have your own precision instrument in hand.

In a later article I will discuss how precision barometers —even those in your phone — can be used underway for sailboat racing or cruising to predict wind changes on inland waterways. Then the precision and fine steps stored are especially valuable. 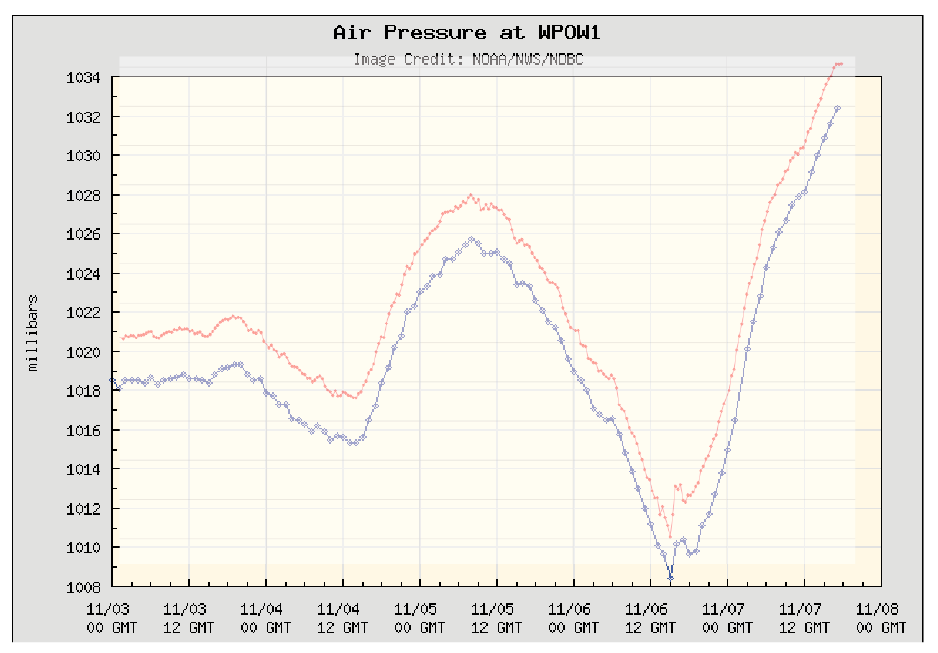 The red curve is from the Starpath calibration standard barometer. The blue from WPOW1. It has been randomly offset to show the comparison.  Our instruments are located 5.8 mb above sea level. We see every small variation reproduced, which shows that such fine structure is indeed being created by subtle changes in the atmosphere, that at least cover a 1.6 mi radius, as that is the separation of the two instruments shown above.


We see even more interesting agreement on the tendency measurements at both locations.  Again the red data is from an in house barometer; the blue from WPOW1. 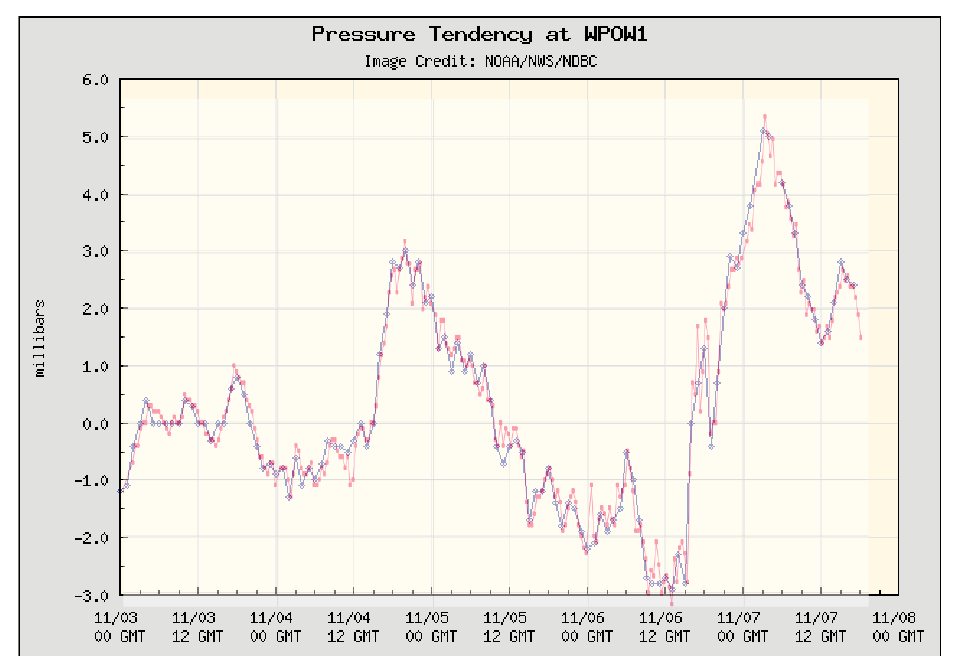 In this case the elevation difference does not matter. Both instruments are just measureing how much the pressure has changed and their different elevations do not enter in.  Here the scales and measured values are identical. Recording and plotting the tendency is valuable to ships who must report the pressure tendency with their regular weather reports back to the NWS.  The detailed agreement and reproduced structure of the plot shows that this is indeed a measurable information that can help with  forecasting and analysis.