Why the Book "Hawaii by Sextant" is Unique

There never has been in the past, nor will there likely be in the future,
such a thoroughly documented navigation study of a voyage
relying purely on celestial navigation to cross an ocean. 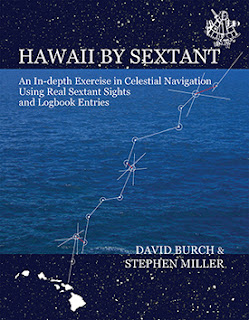 The future part is easy. It is near impossible to find an ocean going vessel without a GPS on board, or in someone’s cellphone. From a legal point of view, it would likely be considered negligent to make such a voyage without GPS.

One might argue that a voyage could be or was navigated by cel nav without looking at the GPS, but even that does not really count. Knowing you have a backup solution changes the mentality of the navigator and biases the navigation. Not to mention that you are less likely to stand on deck with sextant in hand for hours waiting for the sun to peek out for a few seconds to get a sight. With a GPS in a box somewhere, you can more likely gamble that you will eventually get a sight and not have to work so hard at the moment… nor would you be forced to study limited data for hours to figure the most likely position.

Navigators can certainly document good cel nav practice underway in the ocean with detailed information, and such studies are indeed valuable contributions, but that is different from relying on it as the sole source of navigation, regardless of conditions. This book shows what it was like to navigate by cel nav with nothing else to go by but compass and log. It raises the questions you would have to face, and proposes solutions to analyzing difficult data.

Furthermore, suppose such a voyage were carried out and good records maintained. Then we have to fold in the probability that someone would devote the enormous amount of time and energy required to organize and present the information in a usable manner for students. We venture that this is highly unlikely…. maybe a few days sail, but not across an ocean.  A look into the past treatment of this challenge only reinforces this factor.

Why no such study exists from the past is a more interesting point–especially since we describe our book as being “in the spirit of early Bowditch editions.”  Bowditch’s American Practical Navigator (1802 up until 1900 or so) and also Norie’s Epitome of Practical Navigation (roughly same period) are two classic 19th century texts on navigation.  And sure enough each of these do include very detailed practice voyages with celestial sight data and logbooks. It is curious that they all involve voyages to or from Maderia, Spain, which must have some historic significance, but not an issue now.

The key point is that even though these records list the vessel names, voyage dates, the captain’s names, and the log keeper’s names, they are all fiction when it comes to the celestial navigation. In short, they made up the data to demonstrate what they wanted to teach… which is what all navigation teachers do to this day at some point.

These Bowditch and Norie Journals may have been based on actual voyages made at some time in the past, but the data presented is blatantly artificial. (We leave it as an exercise to confirm this observation. The books are online.)

We agree with these masters of navigation that this is the best way to teach the process. And certainly we do not even approach the skill and seamanship they represent, nor can we hope to emulate the high standards they set in navigation. The only point we make is data in Hawaii by Sextant is real; the comparable data in these classic texts was manufactured… and we know as well as anyone why they might do what they did.  After an ocean passage under sail, it is sometimes difficult to put the pieces back together to present a coherent picture of the full navigation, day to day–not to mention that the many details required to reproduce the results are tedious. Few would consider them worth preserving. As we point out in the text, and you see in our own records, when the going gets tough, the boat gets more attention than the logbook.

In more modern times there have also been a couple books published that present ocean exercises in celestial navigation, but these too have been based on manufactured data.  We thus maintain that Hawaii by Sextant is a unique contribution to the library of navigation textbooks.

It is obviously not at all unique to sail across an ocean by cel nav alone. Thousands of mariners over the years have done so. Bowditch did many times. It is not clear that Norie actually navigated. He was more famous as an author and book publisher at the time. He was the founder of what is now called Imray Nautical Publications in UK. That fact also is not surprising. Many early classic texts on navigation were from scholars who did not have practical experience underway. Bowditch, Lecky, and Thoms were notable exceptions.

PS. We have been told that there are several highly experienced navigators who do still have all the records of their early voyages done by cel nav alone.  We look forward to their publications if they choose to do so.  The more data we have of this type the better our learning will be. If these are from larger vessels (we understand they were commercial ships), then that too will add another perspective.