Someone has to care about the details of marine navigation and weather, or things slip by, which might one day show up and cause confusion, and we don't want confusion. Indeed, a hallmark of good navigation and seamanship is clarity in communications. Today, we ran across a gold nugget of doublespeak: MSLP.

We have published a book called the Mariners Pressure Atlas, which contains pressure statistics that are difficult to find, despite their great value for weather tactics in tropical storm prone waters of the world. The book contains global plots of the mean values of the sea level pressure, called mean sea level pressure  (MSLP) patterns (isobars) along with the standard deviations (SD) of these pressures on a month to month basis. The SD are a measure of the variation of the pressure we can expect purely from a statistical spread around the mean value. Sample sections are below. 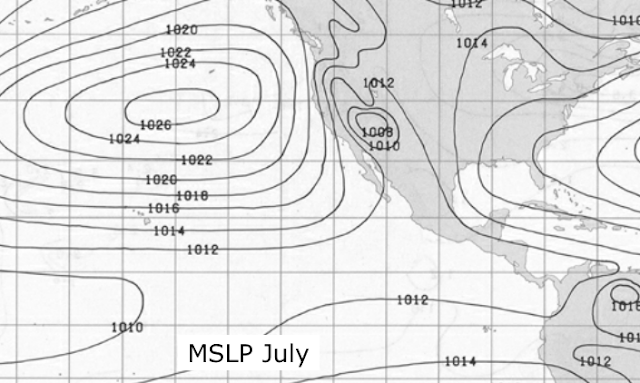 These are the mean sea level pressures (MSLP) in this part of the world in July. Below are the SD values. 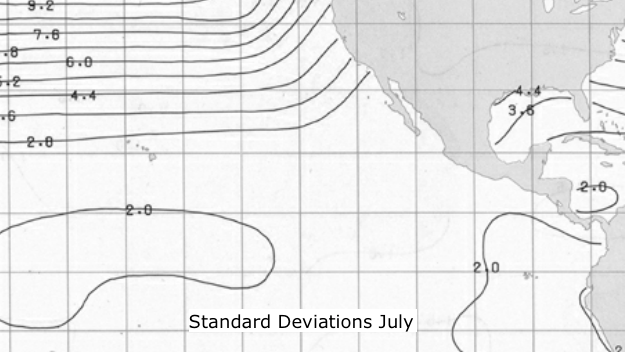 In other words, the probability of normal pressure fluctuations being down 2.5 SD is 0.6%. A pressure that low is almost certainly (99.4%) not normal fluctuation—that is the approach of a tropical storm! The wind will for sure not warn of that at this point, and maybe the clouds on the horizon might not either, but there is indeed a tropical storm headed your way.

This powerful storm warning technique was well known in the late 1700s, early 1800s when ships carried accurate mercury barometers, but unfortunately with the advent of aneroids, by1860 or so this knowledge slipped away because they were not accurate enough then to do this job.  Eventually even the textbooks stopped talking about absolute pressures and just started preaching up or down, fast or slow, which is useless for this type of long range storm forecasting.  Now we have accurate barometers (including accurate aneroids), which is why we rejuvenated this classic method... mentioned in Bowditch, but sadly without a link to the crucial MSLP and SD data.

There are spot values of mean sea level pressures in Appendix B of the Coast Pilots.

But that is not the point at hand. What we are dealing with in the above is the mean value of the sea level pressure, which we periodically see abbreviated MSLP in weather and navigation documents.

Now, however, look at these weather maps from Australia and Canada.  The UK Met Office also uses the MSLP notation to describe a surface analysis map. 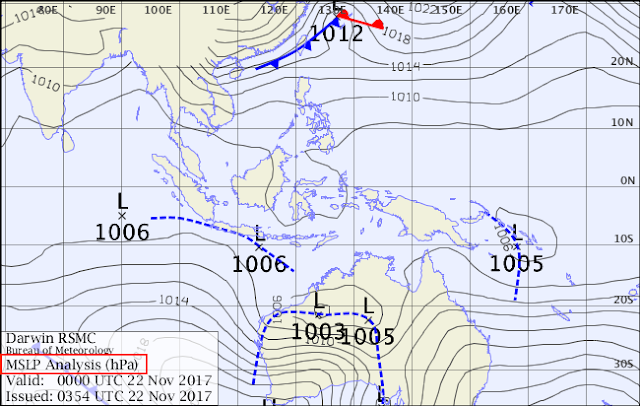 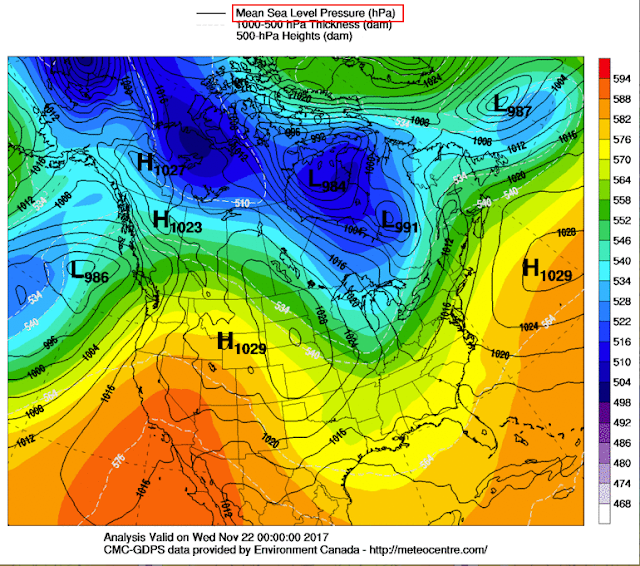 Here is an example of aviation weather (METARs) using SLP; it is also used in some numerical model outputs.

Here is another example that shows the fluidity of the terminology.  The ECMWF defines


"MSLP is the surface pressure reduced to sea level."

So they know that "sea level" is the same as "mean sea level," but they choose to help us make our point!

It is not unreasonable to tack on the "M"; the sea level does change with the tides (to a good approximation mean sea level, MSL, is halfway between MLW and MHW), not to mention that it varies with the pressure above it (called the reverse barometer effect). In fact, MSL is an even more complex concept, but in ways that do not at all effect our use of it as a pressure reference. For present context, this just reminds us to think through the terms we use.  We might note that on nautical charts building, towers, lights, bridge clearances are referenced to MHW, but spot elevations on the land and elevation contours are actually referenced to MSL.

We thus have in common navigation conversation both:

MSLP = M - SLP,   being the mean value of the sea level pressure, and

If you found this abbreviation in some context of your work, and then went to a navigation or weather glossary to look it up, chances are probably only 50% that the glossary will come back with the appropriate answer for your inquiry. Put another way, you will not find an official glossary that has both definitions; they will have one, or the other.

... which I thought we should document, so no one gets the impression we are sitting around the office all day working on trivial matters.

PS. Just ran across this at the Navy site (FNMOC):

Maybe the "M" stands for "model-estimated"?

What about actually putting the - in the name or calling the former SLMP sea level mean pressure, to make clear what mean refers to?

Thanks. I have to agree with you that there are multiple ways we could make this clearer in our our communications, but the goal here was just to point out the confusion that might arise in what we seen in print elsewhere.