Christopher Columbus and the Spherical Earth

Columbus has long been a pet peeve of mine. I regret the unfounded adulation he is given in schools, which seems to persist into public thoughts on him. He would be better remembered as the founder of the African slave trade between Europe and the Americas—although I can say that in the city of Seattle, Columbus Day has been officially changed to Indigenous Peoples Day.

Reading his log, we find that Columbus was indeed a true master at ocean dead reckoning, which in the day was the key to good navigation, as it remains today. But that is the end of what good we can say about him. He was a charlatan, motivated by religious dogma and personal greed... but I digress.

He believed the flat earth theory promoted by the church at a time that every educated person in Europe knew the earth was a sphere, and many knew the circumference of it, which was measured remarkably accurately in 250 BC (see end notes here). In writing about Columbus in numerous places, I have made that statement, and just moved on. Today, cleaning up the office—a regular routine here carried out every two or three decades—I ran across a folder I had made in the early 90s, showing roman coins depicting a globe, which were at one point gathered to support that argument. So now with the convenience of the blogosphere, I present these below and throw away the old prints as a step in cleaning house. They are apparently from a coin collectors catalog.

In other words, the concept of the earth as a spherical globe was so well known in Roman times that it appeared on common coins. 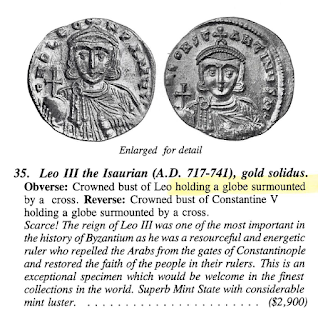 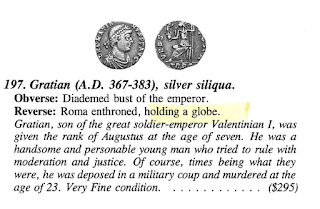 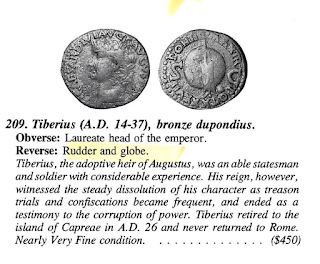 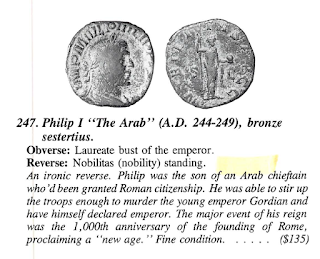 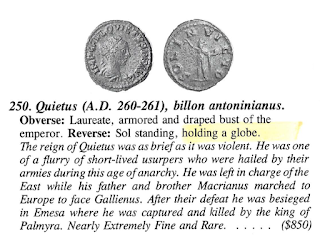 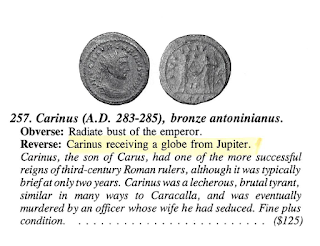 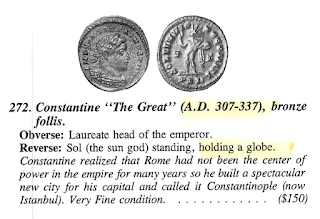 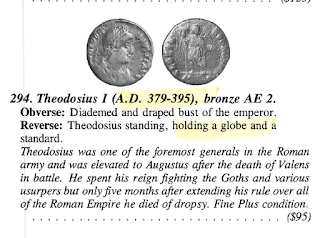 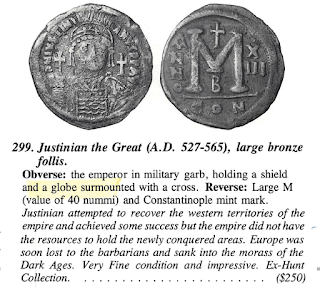 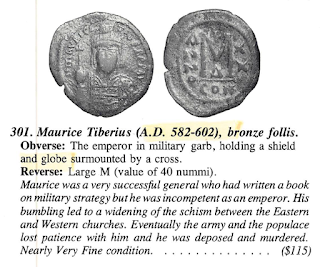 To supplement this thought, here is a figure from our Celestial Navigation text explaining the first accurate measurement of the size of the earth... which I just realized now, has another of my digs at Columbus!

The measurement relies on basic principles of celestial navigation, known in 250 BC, but much expanded upon by 1490—when Columbus was traipsing around with some obscure map based on a religious cult that he did not know how to interpret. Needless to say, many people of his time and for another 300 years, wise and unwise, were overly influenced by the church, but they did not go as far as Columbus did to risk this voyage so he could get rich enough to fund his own crusade. They did not tell me about that in school. 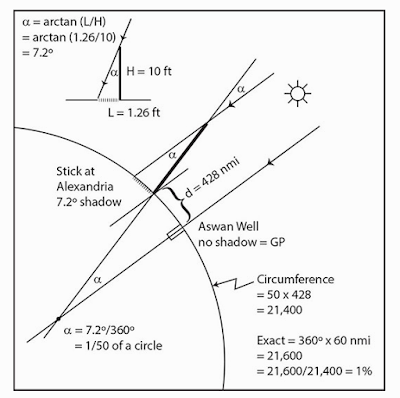 Figure 10.3-3.  How Eratosthenes measured the circumference of the earth in about 250 BC. On the solstice he knew the sun was overhead in Syene (Aswan, 24º 4’N, 53º 7’E), as the sun was known to shine directly down deep wells. It was also known that in Alexandria, 428 nmi to the north, on the same day at noon there were indeed shadows cast by the midday sun. He measured the sun’s zenith distance of 7.2º there at that time, probably from the length of a shadow as shown. The distance between these two cities was well known at the time. Since the measured angle turned out to be 1/50th of a full circle, the full circle must be 50 × the distance between the cities.

We are not sure exactly how well he knew it at the time, but we now know there is 428 nmi of latitude between these two cities. This gives a result that is almost spot on the right circumference. Celestial navigators know the circumference of the earth automatically, because of the definition of a nautical mile, namely: 360º × 60 nmi/1º, or 21,600 nmi.

The main uncertainty in figuring his exact accuracy stems from not knowing the exact definition of his unit of length. Using all variations of this and accounting for the offset to the west of Alexandria, his error was somewhere between 0.1% and 16%. In any case, very good. The factor of exactly 1/50th is just a numerical accident from the geometry of the measurement.

What is rather more curious than the greatness of this achievement—Eratosthenes had so many, in various sciences—is that Columbus was totally oblivious to this information 1240 years later. Other navigators before Columbus and after him were well aware of the dimensions of the earth. It was not long after Columbus’s voyages that this knowledge all resurfaced and world charts proliferated.

Syene had been a famous city in Egypt, long before the Aswan dam. Since ancient times it was the southern frontier, located at the first cataracts that blocked farther navigation of the Nile to the south. It was a 3 to 4 week sail from Syene to Alexandria. The stones of the pyramids were quarried near there and shipped north.

I agree with your thoughts on Columbus. Too bad he is still often held up as a hero.

Neither Columbus nor the Church believed the earth was flat - no learned person in the Western intellectual tradition had believed such a thing since early antiquity. What Columbus was so wrong about was the size of the earth - he believed that its sphere was much smaller than it was, so that it would be possible to sail to Japan across the single great ocean that separated Europe from Asia. He failed to gain funding from the Portuguese, because the court mathematicians and navigation experts there advised the crown that Asia was too distant - Columbus would run out of water and food long before arriving there. No one expected or imagined that the large continental landmasses of the Americas could exist.

I wholehearted agree of your assessment of how Columbus should be remembered.

Thanks for your note. I tend to agree with your first sentence, but do you have a reference to documentation that the church of that time admitted to the shape of the earth and indeed taught it or proclaimed it in some manner?

I don't know how to specifically reference what has been known in the West since prior to the time of Plato. A few hundred years later, Eratosthenes estimated the circumference of the earth to within 10% of the modern value. Perhaps for the backward Europeans of the High Middle Ages, the person to reference is St. Thomas Aquinas, whose great synthesis of Western Christianity and the Greek/Arabic Intellectual tradition (science, more or less), legitimized science as an activity worthy of Christian scholars. For a picture representing the spherical cosmology of the earth and the heavens try a Google search images for "Dante's Inferno", which includes a spherical earth as a matter-of-fact element of its story line. The old trope about a constant warfare between science and religion is not at all compatible with the historical record - life is more interesting than that. Wikipedia "Spherical Earth" has a very basic introduction. Columbus was aggressively ignorant and cruel - he believed in an absurdly small earth which had no basis in observation and theory. It was only wishful thinking - he missed his goal of reaching asia by the distance that the experts of the time could have told him. He went to his grave claiming he had been to Asia.