Hurricanes on the Route to Hawaii — Weather vs. Climate

This is an even year, which means many transpac crossings in small boats from the US West Coast to Hawaii, sailing and rowing. We have the Victoria to Maui yacht race and the Pacific Cup yacht race and the Great Pacific Rowing Race. One issue on this summertime route is the chance of encountering a tropical storm or hurricane, together referred to as tropical cyclones (TC).  The statistics for all TC in the central Pacific of HI are found at the Central Pacific Hurricane Center (CPHC), and shown in Figure 1. Data at that link ended in 2013, but we can find latest data at another link at CPHC, and I have used that data to extend the data in Figure 1. 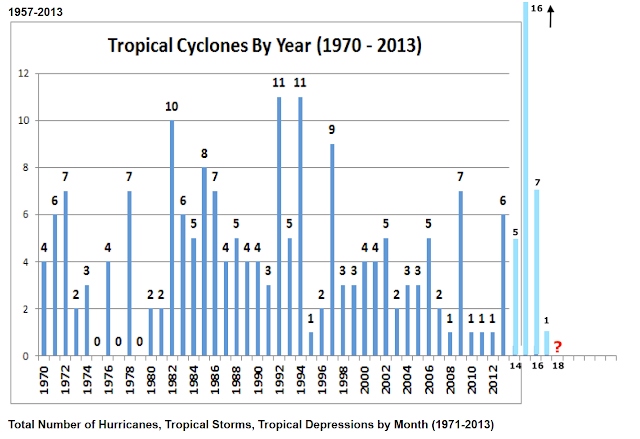 Figure 1. TC in the Central Pacific

We see a total of 212 events over a period of 47 years, which is an average of 4.5 systems per year.  That is consistent with data in Bowditch, as well as updated versions of that we have in our new textbook Modern Marine Weather, 3rd ed.  The CPHC includes tropical depressions in their TC counts, so a couple of these each year may not have made it to tropical storm. In 2015, for example, 2 of the 16 are depressions, not storms.

"Per year" is the same as "per season," as these are pretty much limited to the period July, Aug, Sept, as shown in Figure 2, keeping in mind we try to avoid this crossing in later months due to increasing likelihood of bad weather from other sources. 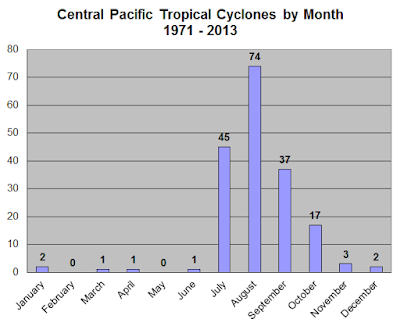 Figure 2, Monthly distribution of probabilities of TC. August is peak; July is next; June is rare.

The statistics are not quite as bad (4 or 5 per season) as it might seem, because many of these get to HI from a southern route that we do not see on the way to HI from CA or WA, and these are small, well-defined systems that are very well forecasted, with standard ways to maneuver to avoid them.

With that overview of the statistics behind us, we get to the topic at hand—Can we fine tune these statistics by knowing something of the climatic behavior of the ocean? In short, does El Nino and La Nina tell us anything dependable about the likelihood that we will meet one of these systems on the way to Hawaii in a particular year?

We might think so, because warm water leads to warm moist air, which is the fuel of all storms. This is why conscientious navigators always measure and record the sea surface temperature (SST).  The SST has to be above 80º F (27º C) for hurricanes to form, so any time we find the water temperature that warm or warmer we know we are in volatile conditions.  These days, if we have lost our thermometer or forgot to bring one, we can get SST in GRIB format from the RTOFS model by a simple email request to saildocs.

I do not know much about the science of the El Nino analysis, but there is much online about it, and for the Western South Pacific, the topic is discussed clearly and in practical details by Bob McDavitt in his excellent MetBob weather blog on sailing in those waters.

But even without a technical background in the subject we can get a feeling of what is taking place by looking at average water temperatures in the ocean band that is used to define the el Nino (5S to 5N,  120W to 170W). The data are found at the  Climate Prediction Center; it is shown in Figure 3, where I have marked in yellow the season of interest here.

Figure 3. Deviations of average SST in the Nino region, presented as a sliding 3-month average. Values greater than ± 0.5º C mark an El Nino (red) or La Nina (blue)  season. The season JJA means June, July, August, which is the one we care about.

These temperature anomalies are called the Oceanic Nino Index (ONI), which are used to define these terms. Note that some years like 2010 start the year with one characteristic,  but by JJA have changed to another. In 2018 we started off as la Nina but it looks like the trend is toward normal.  These data are often plotted as shown in Figure 4 to identify the cycles.

Figure 5. A  plot of the ONI data from Figure 3 used to describe the seasons.

Within these cycles, we can look at the actual seasons we care about from the data of Figure 4, which are tabulated in Figure 5 below, along with the corresponding number of TC. 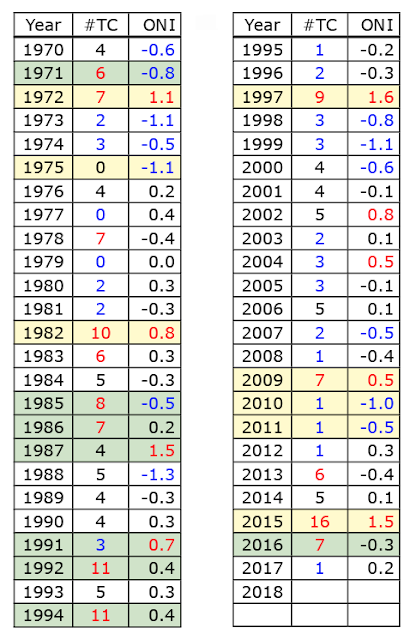 Over these 47 years, the yellow bands mark the years when the Ocean Nino Index was a good predictor of TC likelihood, such as 2015 with ONI of 1.5 and TC# of 16, which is big El Nino and big TC count.  Similar observations occur in 1997. Likewise, in 1975 a big La Nina correlated with no TC at all for that season.  There are 8 out of 47 years when this worked.

But the real statistical correlation is even harder to establish than what we have done. The above covers TC in all of the Central Pacific, but in fact most of these that approach HI do so from the south of the islands and do not threaten our typical sailing (or rowing) routes to them from CA or WA. Relatively few of these actually cross that route. Spot checking two big years we see the following, where it is the green systems that crossed the route, the others being well away from it—though possibly affecting sea state at a distance: 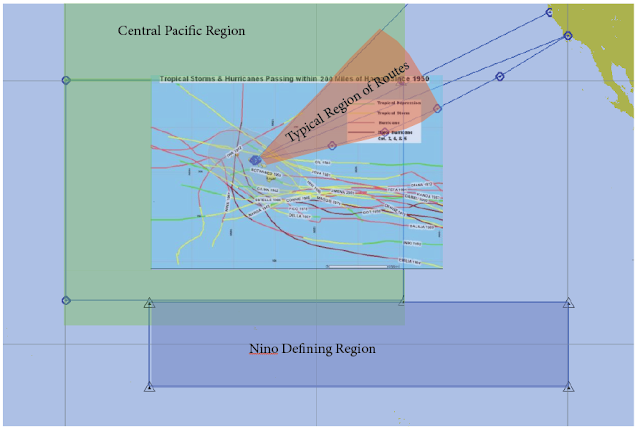 Figure 7. The regions of interest, showing possible encounter zone. The inset is from CPHC showing TC within 200 nmi of HI from 1950 to 2013. There have been notable new ones across the route zone since then, but this shows we are dealing with a fraction of the total.


The point here is this,  the likelihood for a TC reaching the HI routes is even more random than the above analysis shows, because the time and rate of the curvature of a TC path are notably random themselves. Even if we had good climatic forecasts of the likelihood of TC creation, we would sill have a big uncertainty in their getting in our way.

So we are left to stand by our standard advice. There are some 4 or 5 TC per year within 200 nmi of HI, spread over July, Aug, Sept, with each lasting maybe a week or so in these waters. There are  extensive records of past storms at the CPHC to check out the specifics. We see no evidence for climatic guidelines to fine tune those statistics when it comes to predicting if there will be one on the race course in our particular race.

Under sail or power, it is highly unlikely you will encounter a TC that you could not maneuver to avoid.  Even rowing without maneuverability it is very unlikely to have one cross your path, but it would be wrong to modify your estimates of that ahead of time based on the average SST in the Nino region.

We sail in the weather, not in the climate. Take a barometer and thermometer, and modify your estimates that way.

I am standing by to hear from our climatologist friends on maybe other ways to interpret this data.