We use dip short primarily for practicing with cel nav sights on land using a shoreline of a lake or bay that happens to be too close to use, so the shoreline is blocking out the true sea horizon.  We can determine if a shore is far enough away to ignore this issue using the square root of our height of eye (HE) above the water surface.  The minimum distance for a good sea horizon is D in nmi must be greater than the Sqrt (HE in feet).  Standing on a dock with HE = 16 ft, if the shoreline I use for a horizon is 4 nmi or more away, then I can use that shoreline as if an open ocean horizon.  Nothing special would be required for cel nav sight reductions.

Indeed, for D > Sqrt (HE) we are not actually seeing the shoreline; the curvature of the earth is blocking it and we are seeing a true horizon.

Beyond its use in sextant practice on land, dip short remains a practical tool for the navigator's bag of tricks. It was more important to large vessels that relied on cel nav than it is to smaller ones because with a low HE you have to be right up on the land to have the shoreline blocked, i.e., at 9 ft HE you can be within 3 nmi of the beach and still get good sights using the shoreline.  On a taller ship this would be more like 5 or 6 miles.

In any event, if we have not had any good navigation for quite a while and come up on land during the night that we cannot identify, changes are we would hang out till day break to carry on.  And if the sun came up over the land as in the pic below, we would want a sun sight to start figuring out where we are, but if the shore is too close, we have to solve for dip short.

But to do this, we need both HE and the distance to the shoreline (D) which we do not offhand know so far. We do not even know what land we are up against; no chart, no info.  And that is the subject at hand: how to find our distance off in this case so we can use dip short.

Below shows the sun over the land. We are some distance off, standing at HE = 9ft and we guess we are closer than 3 nmi. 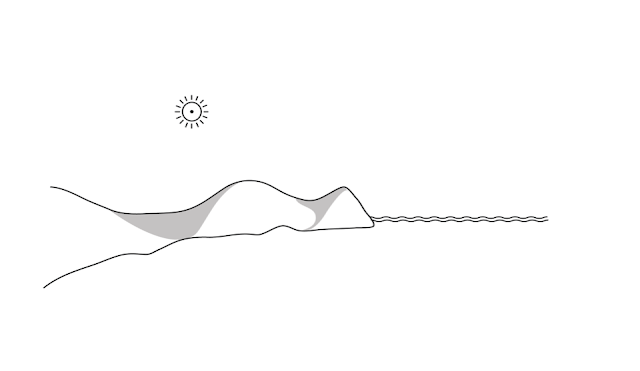 Step 1 is take a bearing to an identifiable land mark on the shoreline. Let's say it was 347 T. This is plotted below on the same picture, but just assume you are doing this on a black sheet of paper, on which you represent the landmark as just a dot on the paper.  We choose to have the top of the page be 000T and then use any protractor to lay off the 347 line of position (LOP). 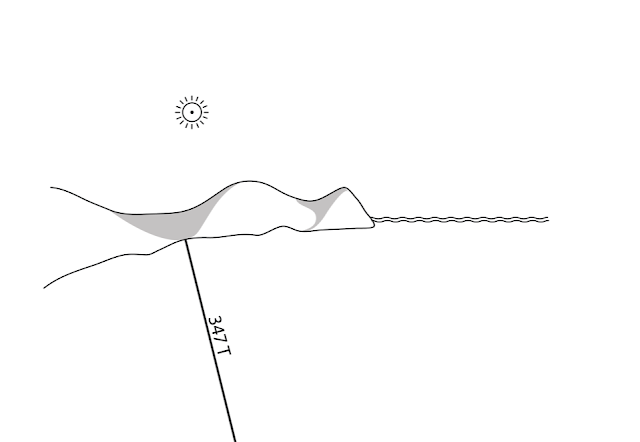 Now we head off on course 294 T and mark the time and our speed, or note the log, and watch for the bearing to change at least 30º or so. In this example when we found that the bearing the chosen landmark was 012 T after traveling 0.6 nmi. That second LOP is plotted below. 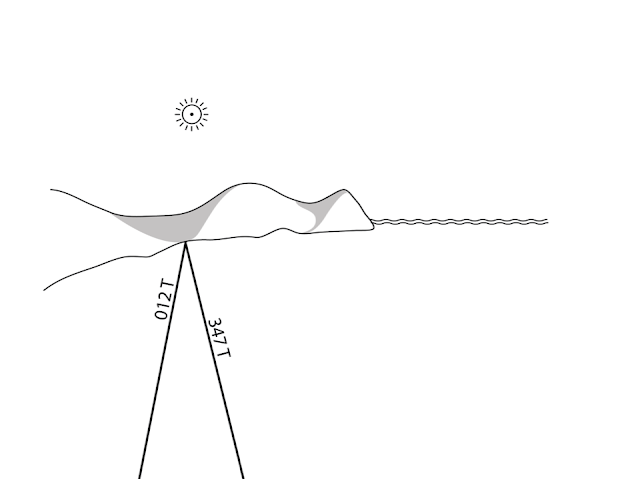 Now we  have enough info to figure our distance off as shown in the next picture.  We do a running fix, which is described first, then we go over a more automatic solution.  We now have to establish a miles scale for our blank piece of paper. It can be anything; just pick something convenient. 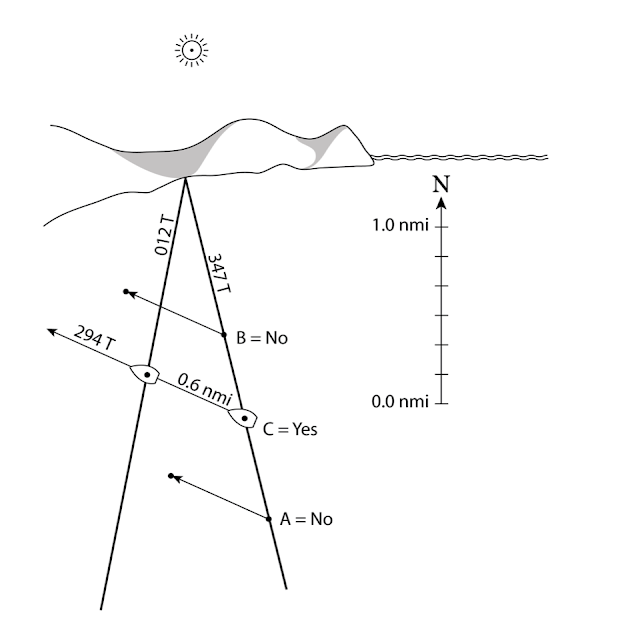 We know when we started to move we were on the 347 LOP. Then we sailed 0.6 nmi in direction 294  and ended up on the 012  LOP.  There is just one place where that can be true, and when we find that we have found our position, relative to the landmark, which gives us the distance off we want. 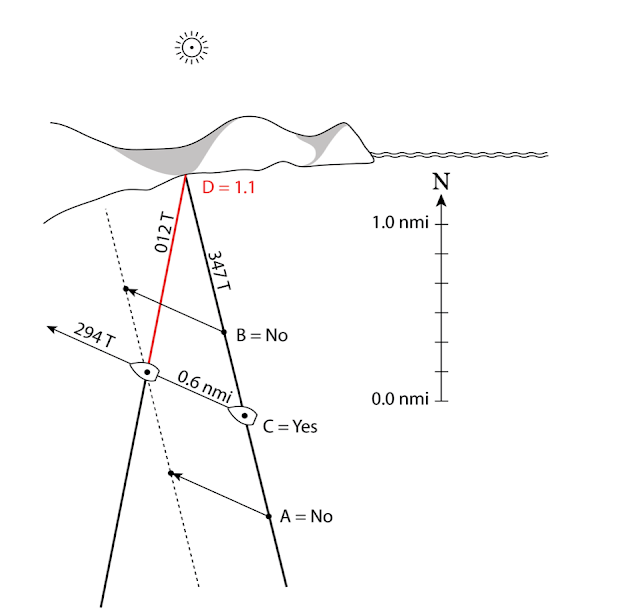 The systematic solution that does not require hunting around is just pick any point A, and plot out the 0.6 nmi in direction of your course, 294, and make a dot.  Then use the parallel rulers to move the initial 347 LOP over to that point, as shown above with the dotted line.  Where that line crosses the 012 LOP is your running fix.  Now use your miles scale to figure the distance off the landmark, which is what we needed. We still have no idea where we are, but we do know we are 1.1 nmi off that landmark and that is what we need to find dip short.

The regular dip correction shown in the Nautical Almanac is computed from the formula shown below for dip.  With our HE of 9 ft, this would be a correction of -2.9' to the sextant height. At any height above the water we are seeing over the true horizon, so our sextant heights are too big and we have to account for this with the dip correction.

When the land is too close, we do not see the proper horizon for our HE. The horizon is too close so our sextant height is even bigger than it would be for a true horizon, so we will have a bigger dip correction, the so called dip short. That is a given from the formula below, which is in our cel nav textbook and many other places. 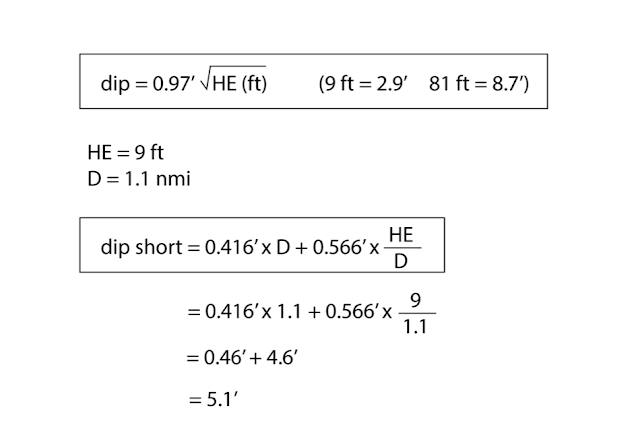 When we put in our HE and measured D we see that the dip short we should use is 5.1', which is also a negative correction.  So doing this right in this particular example, we gained just over 3 nmi accuracy in our cel nav sun sights.  Below shows the horizon we used (solid line of the shore) compared to what we corrected to with dip short (dotted line). 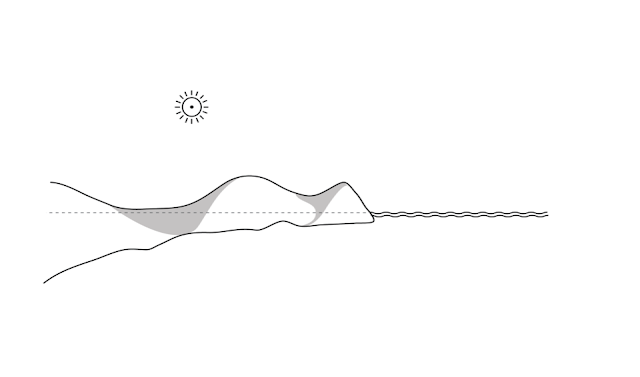