A question came up in our online nav course about R2AK navigation. As it turns out we have worked on this route in great detail a couple years ago as we assisted the Team MAD Dog in preparation for their record setting race. I started to answer this longish question in our class discussion forum, but decided it could be of broader interest, so I put these notes here.

All such planning starts with the waypoints. We made this set for the full race that the team then transferred into their two handheld GPS units and also into Navionics "Boat US and Canada" app on two iPhones and one Android phone. This app for about $50 includes all Canadian charts. They are not as good as the official Canadian echarts, but those cost $200 or $300 from EC... although there is a very good set from RosePoint Navigation for $99 the last I Checked, but these may only work on Coastal Explorer.

PS. There are some tricks to getting an external gpx file into a mobile app version of Navionics. On the other hand, it is relatively easy to get them into a Garmin handheld.

R2AK-1.gpx is the full route Port Townsend to Ketchikan, with logical waypoints numbered and named from start to finish.  R2AK-2.gpx and R2AK-3.gpx are two short alternative legs if the main route has bad weather in these regions. [ Might have to right click and choose save, else you might look directly at the xml files.]

These files can be loaded into OpenCPN or other enav program and then studied in on the screen and on the routes manager display. Without Canadian charts, however, the details are hard to discern. The WA and AK charts are free downloads.

You can also drag these gpx files onto Google Earth to see what the routes look like in detail. There is some thought that there could be very many routes to Ketchikan, and probably so, but there is a logical direct route if weather permits.

Next we used current predictions from the Canadian Current Atlas that we customized and made into ebooks that could be loaded into their phones. Then each day and hour is a book mark, easy to find. Recall that MADDOG was all navigated from the trampoline of an open catamaran. No nav station and no other electronics. 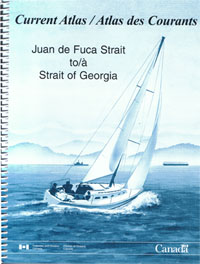 Once into AK waters, we used our own publication called Southeast Alaska Current Atlas, and did the same ebook layout with that data. Both of these convenient current presentations paid off. 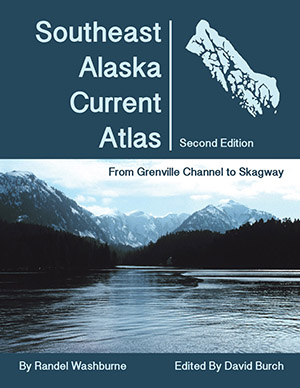 This was an unassisted race, so they had to get their weather info underway themselves, but we could run a day or so out at least as starting points. We considered the key was getting to Seymour Narrows on time, so this was focused upon.  They hit the Narrows, exactly as the current turned in their favor, flying by at 20 kts as the fishing boats hanging out for the right time were pulling their anchors.

Now we have better wind data than we had at that time.  For US waters WA and AK you can use the HRRR (our 19 hr, updated hourly) or 3-km NAM for longer runs.  The best data once into Canada would be HRDPS - High Resolution Deterministic Prediction System, which is 1.3 km run every 6h out to 2 days.  You can get that from LuckGrib on an iPad and transfer it to Expedition for routing... or just look at it on the luckgrib app. OpenCPN and other popular nav programs may not be able to read it. 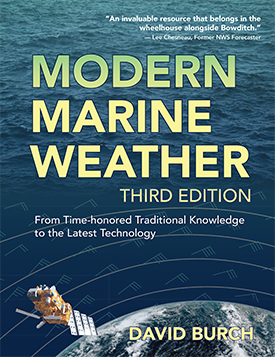 Another key factor to the navigation of this route is floating logs and sometimes deadheads—meaning logs floating vertical with not much showing.  The latter is a risk throughout the Pacific Northwest, but the probability of colliding with one is small.   The when seen they should be reported to the Coast Guard who will then tag them with a flag.

On the other hand, after a very high tide, many of the logs that were beached find there way back into the water,  and these can be a serious impediment in some channels.  I have seen cases there where we had to navigate through a maze of these at dead slow.  This means navigation at night in these conditions takes special care.

As always, a careful reading the the US and Canadian Coast Pilots (the latter called Sailing Directions) is mandatory for this route.  The US versions are free downloads, the Canadian Sailing Directions for BC come in four volumes.  There are also numerous cruising guides to these waters with discussions of anchorages and small boat facilities.

If questions come up on this navigation, then post a question here or in the classroom.

www.starpath.com/insidepassage  Be sure to get a copy of the BC Mariner's Weather Guide which is a top left link on that page. This shows where all the reporting stations are located.

See also this link that gives a gpx file of the current station locations.