Chart Symbols: Rock or Coral on RNCs and ENCs

Discussion reemerged in class about a problem we have had in Quiz 2, #14, for maybe 20 years or more. The discussion was—as it turns out rightfully—questioned by an attentive student.  We have to admit that the distinction between the unlabeled symbols for rocks and coral can no longer be distinguished by the symbol alone.  Years ago when we wrote this question,  this was more or less discernible in that the symbol for an area of coral often used a bold outline, whereas a similar region of rocks used a normal line width outline.

A possible remnant of the older scheme can be seen in the latest Chart No. 1

which shows the coral segment in bold, but with the label coral or sometimes "CO," and now we see above it that rocky area can be bold or plain, with or without label Rocks or Rks.

The other notes on these symbols in latest Chart No 1 is in a supplement,

where bold is used on the top example with a more ragged symbol similar to the International coral symbol, then below it we see normal line width and no label.

So we have to update our question and give up on any reliable distinction between coral and rocks based on the symbol style alone.  This is a bit sad, in that the beauty of nautical chart symbols are their ability to covey tremendous amounts of information by slight variations, which we have often stressed in class, but we certainly have to back off on this one.

The real test of symbols, however, is to wander out into the real world and look at actual charts. We can add to that the powerful tool of vector charts (ENC) which are made up of objects, in this case SBDARE (sea bed area), each of which has attributes, in this case, among others is NATSUR (nature of the surface), which in turn has categories, which in this case we look for either ID 9 rock, or ID 14 coral. Possible options are listed below. You can learn all ENC objects, attributes, and categories at  Caris S-57 Object Catalog.

Remarks:  Click any link above for a list of definitions. The attribute ‘nature of surface’ encodes the general nature of the material of which the land surface or the sea bed is composed.

Mixed bottom: where the seabed comprises a mixture of material, the main constituent is given first e.g. fine sand with mud and shells would be indicated as 4,1,17.
Mud, sand, stone, rock are terms used for the general description.

Clay, silt, gravel, pebbles, cobbles are more specific terms related to particle size. Crossed out items have been discontinued... could be telling us something about global warming!

So the rock v. coral study proceeds as follows.  Find a place where the symbol is in question on an RNC (i.e., paper chart) then open the corresponding ENC and click it (called a cursor pick) to see how it is described, which means what is the category of NATSUR at the place you clicked.

We are not going to find coral in the Pacific Northwest, nor in New England, so sticking with the convenience of US charts, we are off to HI or the US Virgin Islands.  Maybe the Florida Keys?

Below are samples from the south side of the island of Molokai in Hawaii.

Here we see a coral beach between the two tanks. It is marked CO so we can expect this to be coral.

Further around the coast to the right, at the NE tip  (north side of the Pailolo Channel) we see more of this symbol, but without a CO, which leads us to believe this is not coral but rock. 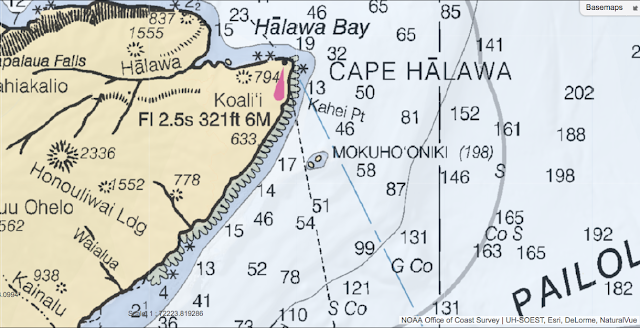 Now we can look at the ENC and check how they are encoded. And sure enough this is identified as rock. Now we go back to the two tanks to the south. 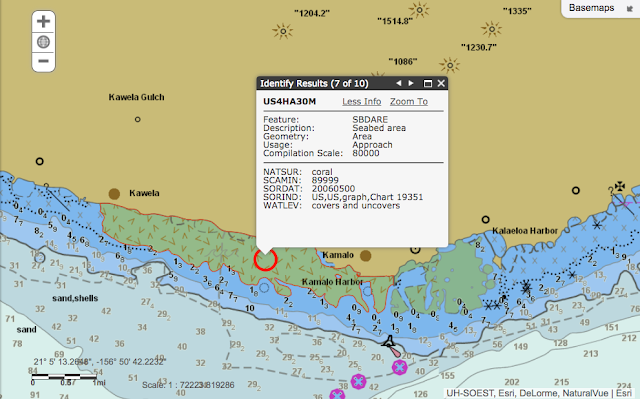 And again, no surprises. This is called coral.

Notice the thin red outline that defines the full object we clicked. We would get the same report clicking anywhere within that region.

Now we click the region just to the right of that section to get this. 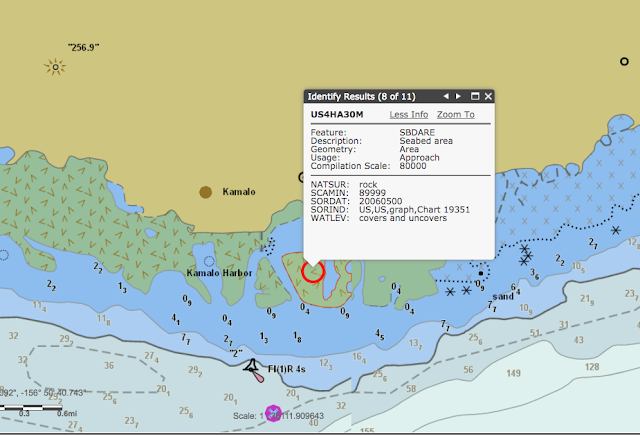 Again, look at the region being selected, and compare this to the RNC of this region shown above.  This is called rock.

So the question comes up, is this a mistake, or is this simply more specific information. According to the paper chart insert for Kamolo Harbor this is a mistake, ie that RNC calls this zone coral. On the other hand, that chart is dated 2010, whereas the ENC of the same insert and scale is 2015. Since the ENCs are made from the RNCs, it is likely that this is new characterization, rather than an error.... but since it is very difficult to find a reason for caring about this particular area of hard stuff, we let it go. 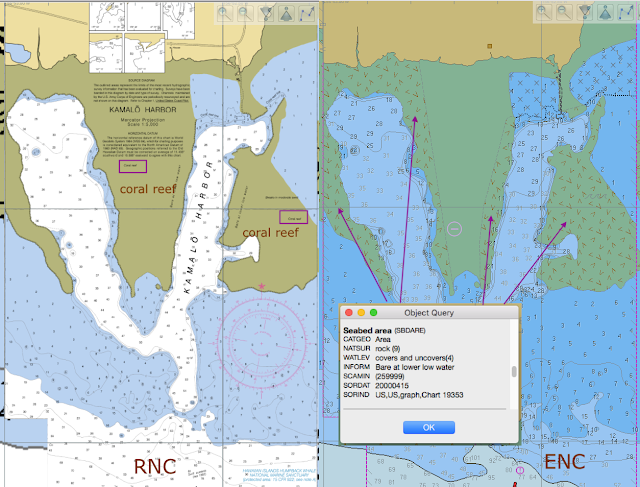 There is either a charting error in the ENC (2015) or it is new data compared to the RNC (2010). The reef is indeed under threat, but I am afraid the ENC chart error is most likely in that the coral reefs on the south side of Molokai are famous worldwide, not just in Hawaii. There is an entire book written about them and they are under continual study: The Coral Reef of South Moloka‘i, Hawai‘i—Portrait of a Sediment-Threatened Fringing Reef

The conclusion on coral chart symbols:  on paper charts and RNC we are best off calling the rocky area coral only if we see a CO or Coral printed near it. And in principle, we can check the ENC to be certain—or at least get another description. As chance would have it, I  I chose at random a poor example to illustrate this...

* * * We just got word back from NOAA that this is a charting error in the ENC of the Kamolo Harbor ENC inset. It will be fixed in their next release. This will be encoded coral next time, not rock.

By the way, this is an important aspect of ENC vector charts, which have tremendous capability for detailed descriptions and they are easy to fix and fast to update. This was an error, but you can also add new information about objects.

For example, you might see a prominent tower charted that has a light on it. A cursor pick will show at least two objects at that point, a LIGHT and a  BCNSPP (special purpose beacon). Attributes of the beacon will be name, color, purpose, color pattern and so on. If any of those seem important and are missing (ie it is horizontal stripes black and white), you can report this to NOAA, ideally with a picture attached, and they can add those attributes to the object.  In short, the ENC will just get better with time, with the help of mariners.  There is another attribute called CONVIS (visually conspicuous, yes or no), which is always good to check when things are in doubt.

If ENCs are new to you or not often used, we do have a textbook that explains their use in depth, along with comparisons to RNC, as well as good practice in electronic chart navigation more generally. 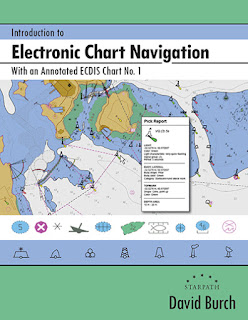 This exercise led to me making a georeferenced Google Earth screen cap of the entrance to Kamolo Harbor that could be overlaid on the charts to see if the bottoms could be distinguished in any manner, and that led to another discovery about that process, which is still underway.  When that is sorted out I will add a video here with more discussion of this latter process....which in principle is a fast easy trick, and indeed ideally suited for planning an entrance into Kamolo Harbor.

Very useful discussion. I overlooked the rocky markings in my answer to question IN02-0014. I am a little sad but much wiser now. When or if there is information on how to convert a google earth screen cap into a chart that will load into OpenCPN I would appreciate knowing this.

We have videos on how to do that. https://www.starpath.com/videos probably in the older OpenCPN playlist.