For many years we have offered a free service to obtain near-live ship reports by email request. The process is described at starpath.com/shipreports.  Until last week, these reports were only available in text format, but now we have added a GPX file of the reports so they can be imported into a navigation program for direct comparison with the latest model forecast—or more generally, just to see where they are relative to you.

Once we are underway, we have only three ways to evaluate the model forecasts: our own measurements of wind and pressure, ASCAT wind speed and direction, and ship reports of direct observations of wind, pressure, and sea state by participating ships.

Our own data are continuous, and with calibrated wind instruments and careful resolution of true wind from from apparent, remain the primary truth meter. Our only requirement then is to be sure to have a log entry of this data at the synoptic times (00, 06, 12, 18z).

ASCAT wind speed and direction are available to us underway in GRIB format or in graphic display (see Modern Marine Weather, 3rd ed for the details), but these data are only available to us within some 300 nmi of our position maybe twice a day. Perhaps more often in some cases, and in some cases data farther from us is still useful to evaluate forecasts.

In some cases, you might even have a "buddy boat" ship that is on a course across a crucial corner of the weather map you care about, who is giving you a report every hour.  This happens more often than one might guess—but there is no way to have known that without using the convenience of our new reporting system.  In coastal waters, there are numerous ships traveling along the coast giving reports every hour.


How the system works

You choose a Lat, Lon in decimal degrees, i.e., 38N, 130W, and put that in the subject line of an email to shipreports@starpath.com. What is in the rest of the mail does not matter. Our server looks for these every 1 min, and promptly sends back an email to you with all reports within 300 nmi of that location that were reported over the past 6 hr. You can use tenths of a degree if that improves what you are after, i.e., 38.2N, 130.4W. This is a global system, so it includes all vessels taking part in the WMO Voluntary Observing Ship Program, although we rely here specifically on the US VOS Program and NDBC's compilation of the global reports. You can try it now:  Get a sample set of reports.

The return mail includes a formatted list of the reports as shown below, along with an attached GPX file that converts all the reporting positions into waypoints named after the time of the report. The description tag of the waypoint includes the key parts of the reports (wind, pressure, waves)—there is more info in the text versions. 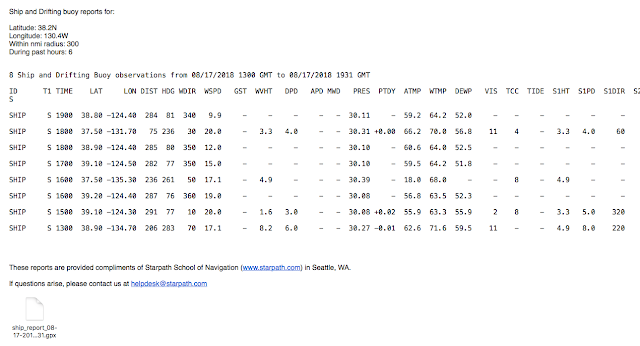 The abbreviations and units used can be obtained by sending email to shipreports@starpath.com with the word "help" in the subject line (no quote marks; not case sensitive).

Unfortunately the NDBC does not have a marine friendly units option. This we live with every time we ask for a buoy report for local waters.  You can choose "metric" and that will give you pressure in mb, but then you live with wind speed in m/s, heights in meters, and temperatures in ºC.  Or you can choose "English" in which case you get wind in kts, heights in ft, temp in ºF, but we have to live with pressure given as inches of mercury... as if we are an airplane or home watching TV.

We have chosen "English" as the least awkward for our text reports, but since we make the GPX files ourselves, we use marine units in the waypoint descriptions.

The GPX file is named by the UTC of your request. To see what this looks like if you do not have a navigation program handy, open Google Earth and drag the GPX file attachment right out of the email and onto the screen of Google Earth (GE), to see a display like the one below.

Click any of the waypoints (named by the times of the individual reports) to see the details, as shown. Since the GPX files have unique names, you can choose to save these in GE My Places, or just close GE and they will be erased.  To view all ship all available ship and buoy reports in GE, see this video where we describe the process—it is strangely a bit of a secret! That function, however, updates with only most recent observations each time you open it, so you do not get to see the trail of "buddy ship" reports mentioned above.

Later I will add a video of the process of using ship reports to evaluate a forecast, but for now we conclude with these brief notes on how the GPX file appears in several popular navigation programs—for the moment, I do not know of any stand-alone GRIB viewers that can import a GPX file of waypoints.

In the samples below, we have zoomed in, so not all reports in the GPX file are showing. 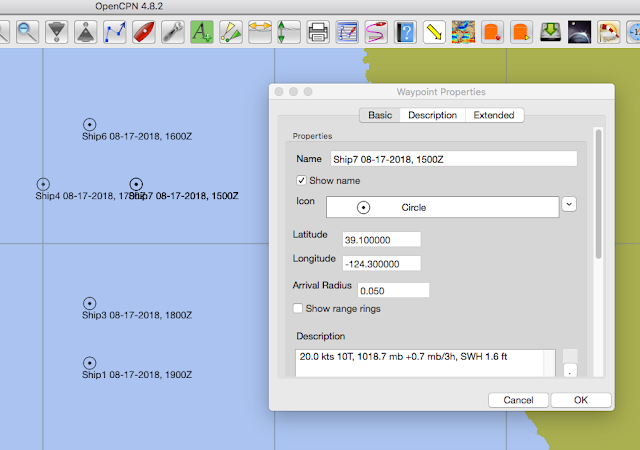 OpenCPN. Use Routes and Mark Manager link at the bottom to import the GPX. Then click one to open the properties window, then you can click others to view the data in this same window. 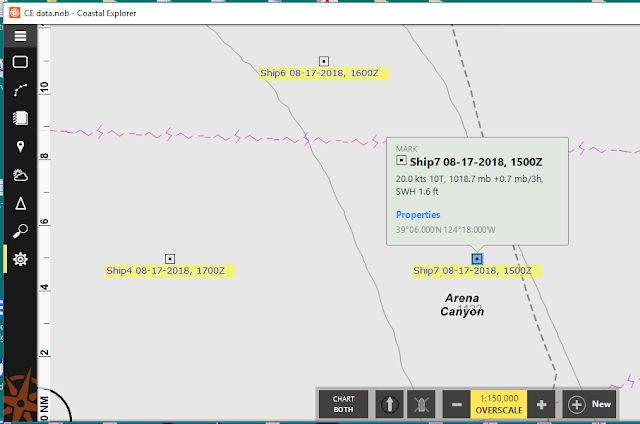 Coastal Explorer. Use Voyage Plan/Files/Import Objects/Other files.  Zoom in to see the labels. Click a report to see details as shown above. 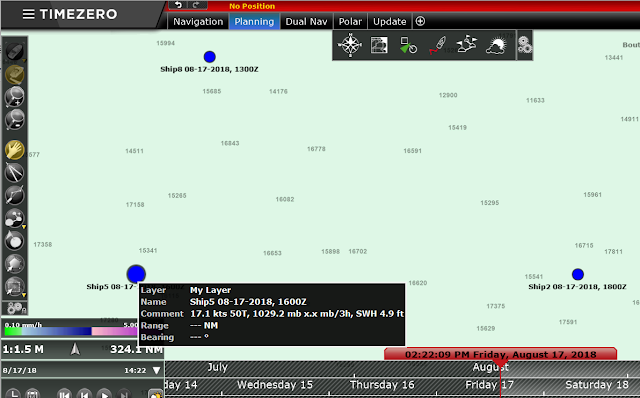 TimeZero.  Use Import/Export, choose GPX and Marks. Click a mark to view data. Waypoint labels are small and not apparent till zoomed in. 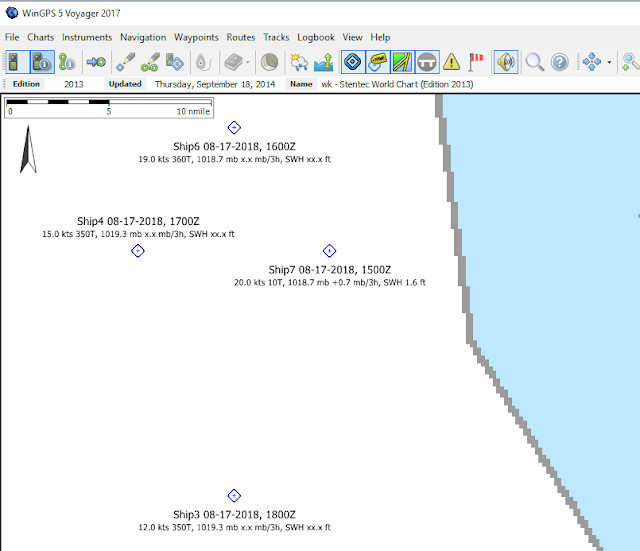 WinGPS Voyager. Use File/Import/GPX.  Once loaded, select all, and import. For this particular application, this program has a convenient default display that shows waypoint descriptions, so no clicking needed.

Expedition shown below is unique as far as I know as the only nav program that has a built in option to download recent observations. It is on the Weather menu/Download. There is a drop down showing the various sources of the data, but these are not selectable choices. Choose a range from the vessel location, and then receive all latest available observations within that range. 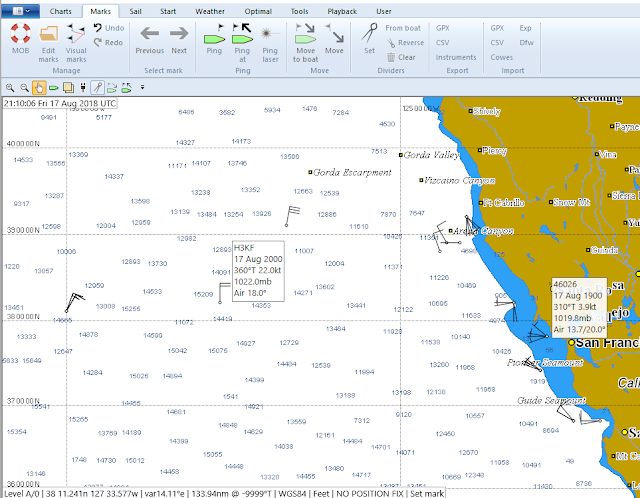 Above is an example of the observations display in Expedition. Observations over the past three hours are included, thus we see buoy reports with multiple winds, which is a nice way to note they are changing over this time period. Sometimes there are two reports from the same ship, but rarely more. A mouse over the symbol brings up the data. I have superimposed the buoy 46026 popup manually.  Below are the wind reports at that buoy from NDBC, which shows the spread indicated in the Expedition display (I added the kts column). 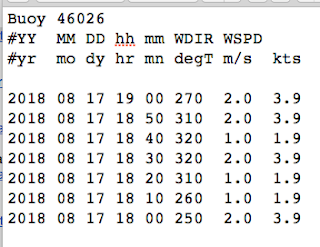 Expedition users do not have much call for our ship reports service, but it could be interesting to compare them, especially when trying to identify the route of a specific vessel. Also we can bring in reports for any location, which would save moving the vessel.

An example of our ship reports GPX imported into Expedition is shown below, while it is showing its own observations display over the same region.  The Expedition reports are marked by a wind barb. 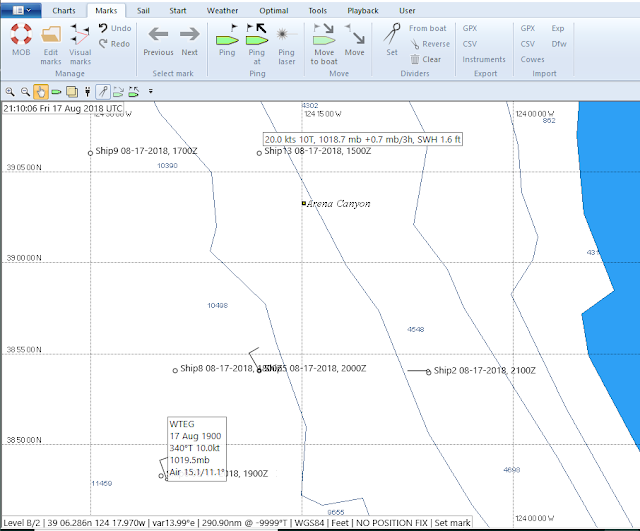 With or without the labels, a mouse over shows both the native Exp reports (tall rectangle) as well as our GPX reports (horizontal rectangle) when they are duplicated. One possible value of the GPX reports is they are not removed when you Reload the Exp reports. The native Exp service always brings in the latest 3 hr of observations, which are updated with the Reload button. The label (i.e., WTEG) is likely unique to the vessel or voyage, but seeing the route of 4 or 5 reports in a line across the chart not only identifies the vessel, it can also be used to predict later positions for more reports.

The Exp reports include air temp and DP (we have this only in the text part), and we add the pressure tendency (observed pressure change over the past 3 hr), which can be tactically valuable.