Finding UTC of LAN with the Starpath Custom Sun Almanac

We published a short book last year that is intended to be the bare minimum celestial navigation training that will serve as a backup to a loss of GPS. In keeping with the backup concept, the book is presented in such a way that it is totally self-contained, which means the book also covers how to use the simple Davis Mark 3 sextant. This is a small device, for under $50, that could be used to safely circumnavigate the world.

Our promise is that this book could be opened up and read for the first time when it was actually needed, and it would be adequate to teach how to take the sights, and then find your position from them using only data in this small book—a large part of which is a custom Sun Almanac designed to make the position solutions especially easy. 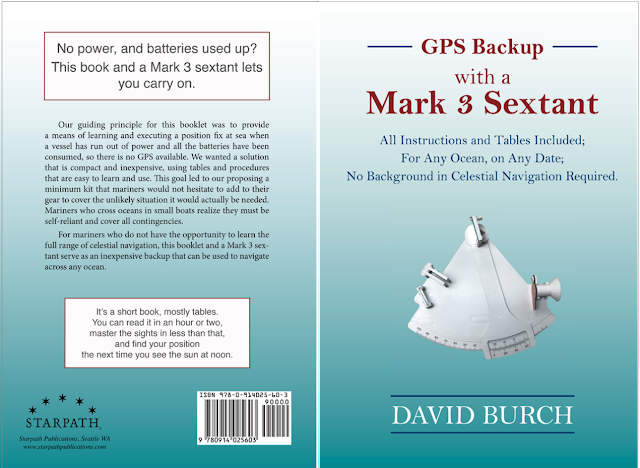 GPS Backup with a Mark 3 Sextant

The techniques taught in this book are finding Lat and Lon from "noon sights" (local apparent noon,  LAN) as well as Lat by Polaris in the Northern Hemisphere. What we forgot to include in this first printing was a way to determine an efficient time to start taking the sights near midday. LAN occurs when the sun crosses our meridian, bearing due north or due south at its peak height in the sky.

When the sun is less than halfway up the sky at noon, we can approximate its motion along the horizon as a bearing change of 15º per hour.  So if we want to start about 30 min before the sun reaches the horizon, we would start taking sights when the sun was bearing about 173 T.  After that first round of sights, we will know the time of LAN and the next day we can fine tune the starting time.

When the noon sun is much higher in the sky it is more difficult to predict its bearing change rate as it approaches noon, and as we head off toward the tropics the sun will indeed be much higher at noon, so it is valuable to have a systematic way to predict the time of LAN to plan around. The custom Sun Almanac offers an easy way to do this. In fact, it is easier than the standard methods we use when teaching the "full cel nav" course.  The full theory is in the picture below from our textbook Celestial Navigation: A Complete Home Study Course. 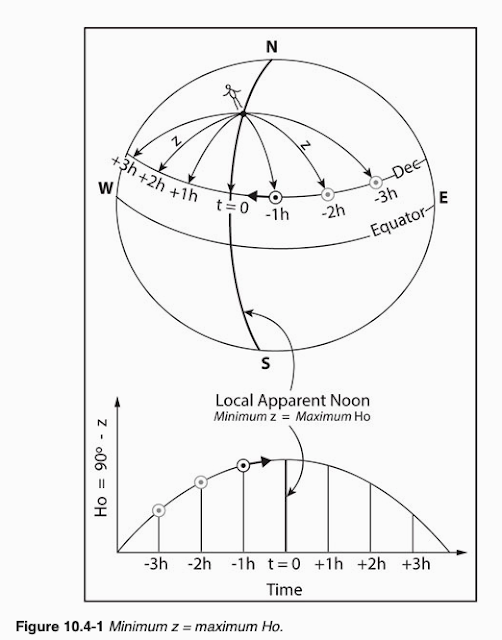 As the earth rotates toward the east, the position on earth directly below the sun (its geographical position, GP) moves west at the rate we are rotating, namely 360º of Lon in 24h = 15º of Lon per hour.

The custom Sun Almanac tells us the longitude of the GP (called its Greenwich hour angle, GHA) every hour of every day. So we can go into Sun Almanac on the right day to see which whole hour of UTC has the sun's GHA just east of our location.  Then we subtract that GHA from our DR-Lon to see how far it has to go (as an angle) to get to us, and then we just covert this angle to time at the rate we are turning, which can be derived from 15º = 1 hr, 1º = 60 min/15 = 4 min, etc.

Here are two practice problems from our textbook (page 33.) 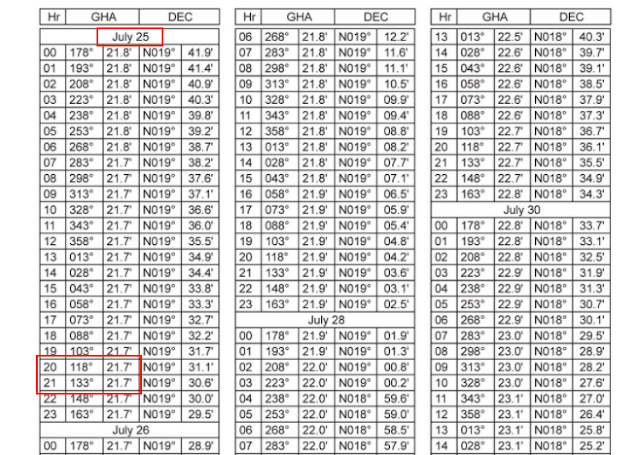 Final time is 20h 15m 45s, which we would round to 2016 UTC, as we never need to know these times more precise than that, not to mention that the DR position that it is based on has some uncertainty.

Now we are back to solving the problem just as we did for western longitudes. 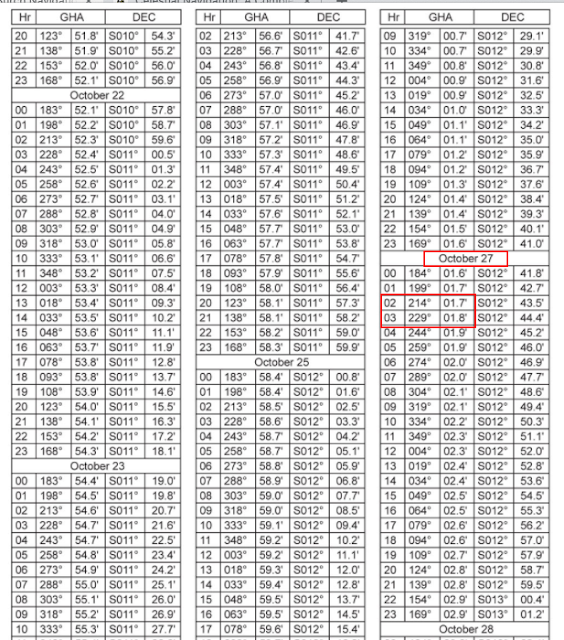 For those who might like extra practice, you can use the USNO sun data computer (Form B) to randomly select locations and dates to compute UTC of LAN (they call it "sun transit"), and compare that with what you get from the custom Sun Almanac.

In principle the answer depends on the year, but our custom Sun Almanac averages out yearly differences, but even with this, the time of LAN found from the these tables will always be right to well within one minute.

Notes:
• the USNO site is down until April 30, 2020
• the new printing of this backup book now includes an arc to time table as well as an analemma as an alternative means of finding time of LAN.