New PDF Edition of a Classic NWS Pub... With Related Notes on FTPmail

There is a new edition just out, dated April 11, 2019 of the long standing publication, now called

We refer to this document in our teaching by its file name "rfax.pdf" rather than its title for a couple reasons. First, even though the content and title of the book have changed over the years, the filename since it was first put online has not changed; you can always find this with a search for "rfax.pdf."

This is now a free PDF, but back before internet it was a must-have nav pub for ocean navigation. In those days, in keeping with its earlier title (below), the pub included the voice broadcast schedules as well as radio fax schedules, including valuable global diagrams of the forecast regions. 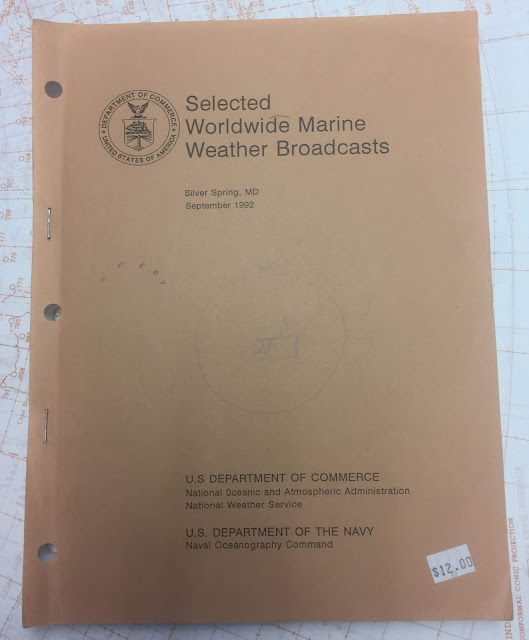 Oldtimers with memory of ocean sailing before the internet will recognize this book that everyone had on board. For historical interest, old versions are online.

Secondly, beyond containing all the radiofacsimile schedules from around the world, it has also for many years now included the best of all of the official references to the FTPmail service offered by NOAA. This part of the publication has been hidden in this pub since it was added some years ago by not being mentioned on the title page or bookmarks. It was at the end of the document as "Appendix B," but the only bookmark was to Appendix A-8, without a title.

Granted, if you did read to the end of the Table of Contents you would see it listed as Appendix B. In this new edition, the FTPmail instructions are in the same place, and they have minimized the confusion by removing any reference to any appendix in the bookmarks.

Appendix A is also valuable for mariners including contact info for all branches of NWS as well as a detailed list of all weather resources online.

Appendix A and B are major resources, not implied by the title of the document, so we just have to know they are there... which you would know from our weather book as we have stressed the value of this reference of years.

I am hoping that if anyone from NOAA sees this note they might consider reissuing this latest version of rfax.pdf to include a mention of these important references in a subtitle of the document (such as "and Related NWS Resources"), and add bookmarks with real titles.

Also if they do make a new one, I hope they will also update the section at the end on the Voluntary Observing Ship (VOS) information, including the links to Port Meteorological Officers (PMO) listed. PMOs are the key liaison between participating ships and the weather service, and their personnel and contact information in this April 2019 issue is a year or two out of date. Having that data wrong is incongruous in that the book starts out on the first page of text praising the VOS program and how important it is to mariners.

There is another subtle reason modern mariners have an interest in this rfax.pdf document, even if they do not receive weather maps by rfax, but instead get their maps by email request. What we learn from this document is which nations actually produce synoptic weather charts. If such maps exist, they are the products of professional meteorologists, and not just reprints of a GRIB presentation of a pure model output. As such, they add much to our confidence in forecasts compared to using pure model data alone.

Once we know these maps exist, we can go about finding out how to get them by email request. We have compiled a list of Southern Hemisphere sources, and we can find international sources in the FTPmail folder on line—see, for example, the file called otherfax.txt.

The rfax.pdf also tells us when these maps are available for email request, as they must certainly exist at the time the rfax version is broadcast.

One possible reason why these valuable FTPmail instructions in rfax.pdf are not being stressed as much as I think they should be, is the NWS is working on new publications devoted to FTPmail.

Historically, the most often referred to instructions for FTPmail is a file called FTPmail.txt, which is pretty much unchanged since the system was developed many years ago. It is an introduction to conventions, along with a list of links to more detailed product lists, i.e., otherfax.txt.

One version of the developing new instructions can be found at a link at the Ocean Prediction Center (OPC) under menu: INFORMATION / Receiving Products / FTPMail: Products via Email, which is a more convenient version of FTPmail.txt.

Another version is attributed to the VOS. Find this one at the OPC menu: INFORMATION / Product Information / Product Guides / Marine Radiofax Chart FTP Email Procedures.  This one has the valuable feature of showing not just a list of map file names, but also includes samples of each of the maps. But this document is maps only, whereas FTPmail can be used to obtain just about any product made by the NWS, including all reports and observations, and such important ones for offshore as the Metarea forecasts and tropical storm advisories.  Also, none of the files are actually linked in this presentation.

In short, both of these alternative discussions of FTPmail are better than the simple FTPmail.txt, but neither one of them, nor both together, is as good as the set of hidden instructions in the back of rfax.pdf, which stand out first because they provide live links to the data and second they specify the broadest range of products, directly without reference to other documents.

For that reason and others mentioned, it seems navigators will want to download this file and store it on one of their their devices they will have when underway.

The crew of SV Fluenta said...

Thanks for posting this. The VOS is the most useful one I have seen for accessing weather files over e-mail. The only thing I could not get to work was the text forecasts but I can do that via saildocs.

Thanks for this info. David from SV Perigee.