It turns out that this title is not quite true for the 1st and 2nd editions of the book, because the 3rd ed (Sept, 2019) includes a new application—namely great circle sailing solutions; the subject at hand.

We did not invent this new application, and indeed did not think of it ourselves over the years working with this star finder. We learned of it by chance because one of the original 1921 versions  (HO 2102-A) was found by Mike Walker in a garage sale in Rowley, MA. He recognized its historical value and kindly donated it to Starpath. We are in the process of documenting the device, after which we will post it on the Institute of Navigation's  Virtual Museum, and then donate it to a real maritime museum.

The original patent for the device by Capt. Gilbert Thomas Rude (pronounced Roo dee) did not mention this new application (solving for great circle initial heading and total distance), but the instruction sheet included with the actual Navy versions did include a couple sentences outlining the procedure. It seems those instructions are not quite right, but the principle is clear, so we can work around them. The method will definitely work better on the original 2102-A (star disk diameter 14") than on the present 2102-D (disk diameter 8"), but as we show below, and in an accompanying video, the current version that thousands of mariners own does indeed still provide a useable initial heading and total distance for great circle sailing. This technique was not mentioned on the later versions 2102-C (1932) and 2102-D. Obviously, it is not as precise as we get from an app in our phones, but it is one more tool in our bag of tricks that does not require power and can be dropped into water, stepped on, and kicked around, and still work fine.

For comparisons in the following, accurate great circle (GC) and rhumb line (RL) solutions can be computed online at www.starpath.com/calc. 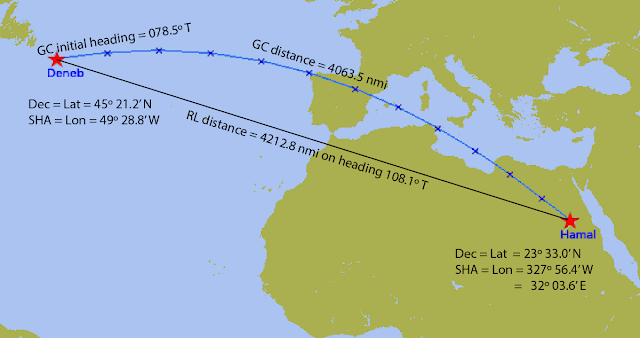 These waypoints happen to be the fixed positions of two navigational stars that are plotted on the white disk of the 2102-D star finder. The GC solution by star finder comes about because the arcs on the blue templates are great circles plotted on the same projection used for the white star baseplate. A sample is below. 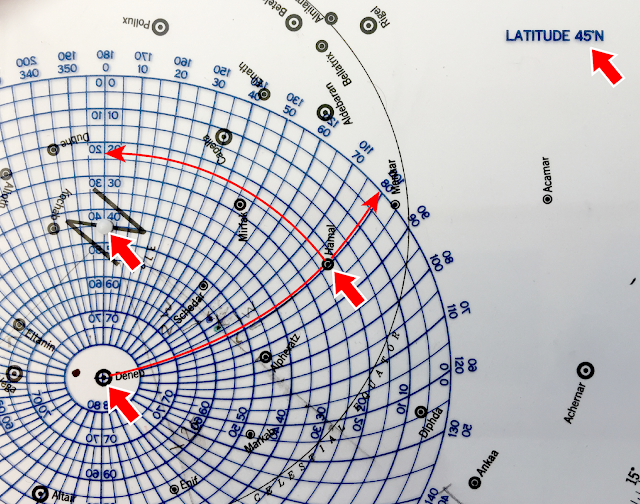 We chose Deneb for this example because its declination (N 45º 21.2') nearly matches the Lat 45 N blue template of the star finder. There is a template for every 10º of Lat, up and down from 45. We chose Hamal more or less randomly.

Thus we imagine the earth not rotating and we are at the geographical position of Deneb, meaning it is directly overhead, 90º above the horizon, and we want the initial GC heading and distance to Hamal. The blue lines are all great circles, so we just find the one that goes from Deneb to Hamal, and read that true bearing on the rim of the blue template, which corresponds to the horizon as viewed from Deneb, or more generally from the center of the template, wherever it is located.

This GC heading is a whopping 30º north of the RL route in this example,  so this could have a major impact on navigation decisions.  We don't care so much that one route is shorter than the other, even when this difference is large as in this case, because we are dominated by wind and rarely can make good such routes. But knowing that 078 is just as good or even better than 108 gives us some freedom in planning what to do in local winds.

In the real world, our initial latitude will not coincide with a template value, so we have to improvise the process.  We will work two examples.

The question is, how close can we get to these GC values using the 8" disk of the 2102-D star finder?  We see the answers in the video below which works these two examples from scratch.


The procedure
Illustrated in two videos below for Northern Lat departures

(4) Set dividers to arrival Lat on the red disk and then plot it on the arrival meridian.

(6) Then hold the template in place and carefully read the altitude (Hc) and bearing (Zn) to your arrival point, interpolating as best you can. The initial GC heading is Zn; the total GC distance is approximately (90 - Hc) x 60 nmi.

The two examples above worked on the star finder.

This method of solving great circle sailings basic data (range and initial heading) is not accurate enough for the USCG exam for unlimited masters. Indeed, we show in another article that the only method that works dependably for all exam questions is to compute the solution directly. See Great Circle Sailing by Sight Reduction.