Frequency of ASCAT Data at a Specific Position

Wind data from the ASCAT scatterometers on the European satellites Metop-A and Metop-B are the truth meters for ocean forecasting. Each time we get a surface analysis map at sea, a next step is to check to see if there are any ASCAT passes near the time and places of the forecast we care about. If the wind measurements agree with the analysis maps, then we can have more faith in the forecasts. If they do not agree, we have every right to use that forecast with caution. The ASCAT data are presented online in a convenient graphic format.

Methods of obtaining the ASCAT data by email or direct satcom request when underway, along with further details of its use, are covered in our textbook Modern Marine Weather. We use one of the most convenient methods in the procedure outlined below.

The analysis maps are available every 6 hr at the synoptic times 00, 06, 12, 18z. So for starters we are looking for maps at or near one of these times for map comparisons—although we learn about our local conditions from passes at any time that are near us. Second, the satellite pass must cover some region of the ocean we care about.

Estimating the likelihood of such a pass is not simple, because the satellite circles the earth every 104 minutes (1h 44m) going up one side (ascending pass) and down the other side (descending pass) during one orbit.

On top of that, the earth is rotating (toward the east) during this 104m, so the track curves to west ascending and to the east descending during the 30 minutes or so of time it is in view on that pass.

And on top of that, there is a gap in the data just below the satellite (the nadir gap) because this type of scatterometer cannot read data directly below its position. Thus each pass has two 300 nmi wide swaths of data separated by a 240 nmi wide gap.

On top of that, we have two fixed swath widths plotted on a round globe in a mercator projection so the paths are distorted from that as well.

With that in mind, how often will any random point on earth see a pass that provides data within 200 nmi of that position?  That is question 4.14 in our Weather Workbook—which is maybe a little bit unfair, because the only place you get the answer is our own textbook!

That is, until now. I just figured a way to get good data on this; so one can actually measure it, and not rely on our estimates, stated, up until now, without proof.

Here is the procedure.

The key tool will be LuckGrib, which can download ASCAT data in GRIB format. It automatically provides the past 3 days of passes that crossed the users selected area. Needless to say, we are generally looking only to present and future passes, not past ones, but the display of past tracks helps us anticipate the next track since they are evenly spaced on the globe.

We also take advantage of a feature of LuckGrib that lets us import GPX files. So our trick is to use OpenCPN to create routes that mark the circumference of 200-nmi radius circles around 6 random positions. Then we export these routes to LuckGrib, display the circles, download the ASCAT data, and then step through the sequence of satellite passes to see when data appears inside any of these circles.

More specifically, in OpenCPN we drop a mark where we want to look, then add a 200 nmi range ring to that point, then we trace that circumference to make the circular route, then export it as a GPX file. In practice, all 6 are made and stored, and then exported as one combined GPX file. 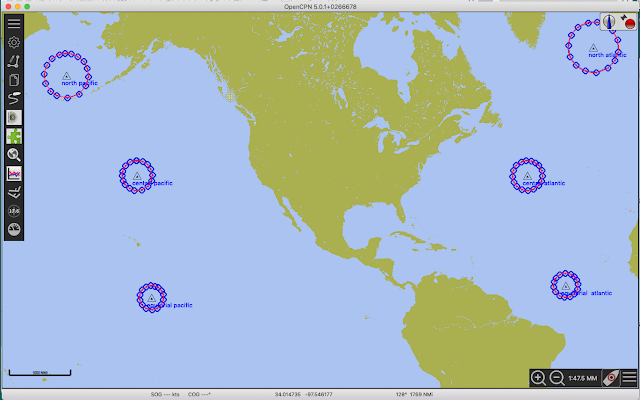 These routes imported and displayed in LuckGrib look like this after we download the ASCAT data for the region shown. 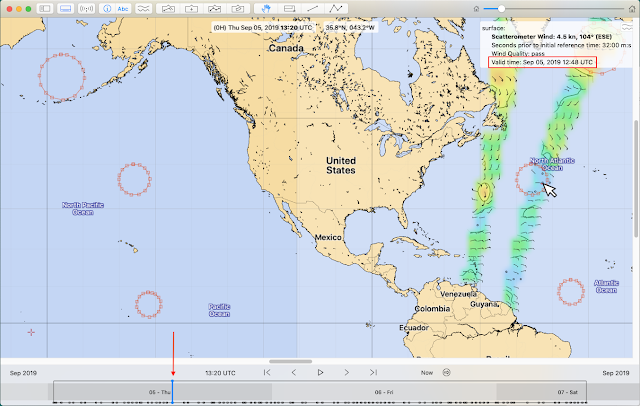 This is the view advanced to the 24th satellite pass (marked on the bottom).
The valid time of the pass is shown in the top right display. 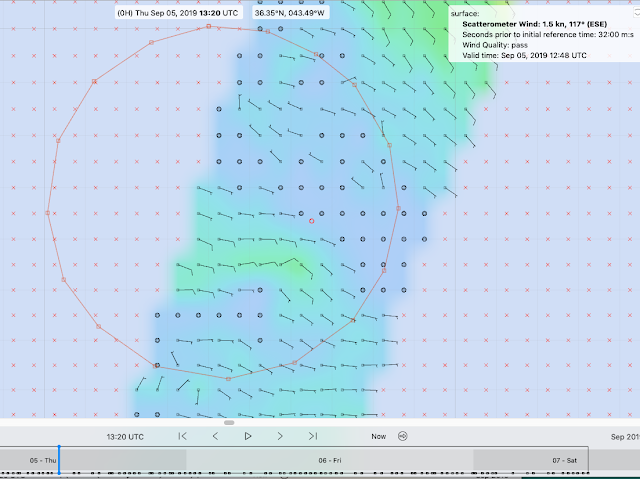 We see light air, reversing direction to the south, and prominent patches of calm.

In this process, we step through each picture starting from the far left, which is 0038 on Sept 5, 2019 in this case. There are some 50 passes to check on Sept 5th, then we do the same thing for Sept 6th. 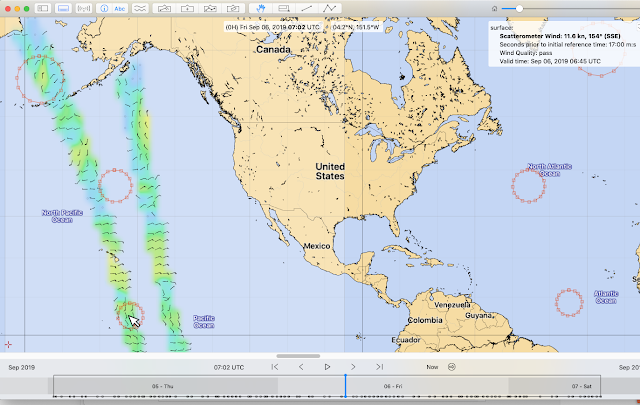 Another example from a pass on Sept 6. This shows data for the North Pacific (0700) and for the Equatorial Pacific (0645).

The compiled data are shown below. The 1248 example mentioned above is marked in the table.

Now we can count the passes that have data within 200 nmi of the points selected. First we see what might be obvious; the higher the latitude, the more passes. This comes about because the earth is not rotating very fast (in knots) at high latitudes, so the same place stays within the data swath longer than at the equator.

The published answer in the workbook is "2 or 3 times a day, depending on latitude"—we were not really considering high latitude regions where there is less sailing. With this new study we might reword that answer at next printing to be  2 to 4 times depending on latitude, but this depends a bit on the wording of the question. Two entries above that are within 104 min of each other are likely the two sides of the same pass, either side of the nadir gap. This is indeed new data, but not a new pass.

For a more generic summary, we can offer this to the answer of: How often will we get ASCAT data within 200 nmi of our position?

For the mid latitudes, expect data 3 or maybe 4 times a day.

For the equatorial region, expect data 2 or maybe 3 times a day.

At high latitudes data are available about 5 ± 2 times a day.

Below is a video illustration of the above process.