If we lose our ability to get weather maps underway, it is likely we will still have voice reports, because we can get these with a portable SW radio. The procedure then would be to tape record the broadcast so you can transcribe it with double checks. Then to get a feeling for what it means for your part of the ocean, it is best to plot it out on a chart or plotting sheet in some form. This is an exercise in doing that, which also nicely illustrates a point we make many times in the course. Namely you will always learn something about the weather map from the text report, and you will always learn something about the text report from the weather map.

In this exercise we are preparing for not having both, but it will show why you should take both whenever you can and compare them. These days many mariners are skipping over any type of analysis they can do on their own (ie not learning it) and relying on the GFS model wind predictions (GRIB files). Chances are, this will serve their needs in many cases, but if when decisions are crucial ones, it pays to do the best you can on interpreting the forecasts you get. Remember there will always be a forecast, and they are not marked good or bad. The background in this exercise is a step toward learning more about the forecast.

We start with the basic report below, which we downloaded from the Internet, but this is what you would hear from the USCG relay of the high seas report over HF frequencies, 4 times a day. I will insert comments in italics and then color code some parts.

There are three sections to these reports, WARNINGS, SYNOPSES, and FORECASTS. Unfortunately, these three components of the report are seemingly separated in some parts (though not really) and other places mixed together, so we have to read the reports carefully. A highlight marker or two can help sort things out when you have a printed report. When transcribing from voice reports you have to be even more careful in what you write down, then get out the highlight markers.

We will leave the text files just as you would download them or receive by Navtex, since part of the task is always interpreting what is given to you. Navtex is another way to get the text files at sea. Navtex is broadcast on AM frequencies, from coastal stations. You can also get some of these by sat phone downloads and any of the text reports can also be obtained by email. See our articles and discussion of NWS FTPmail.

HIGH SEAS FORECAST FOR METAREA IV
NWS OCEAN PREDICTION CENTER WASHINGTON DC
1630 UTC SUN JUL 04 2010
This tells us when the forecast was made and by whom (OPC), but not yet the crucial time of when it is valid. The concecpt of Metarea is valuable. We have lists and diagrams of them in the course. They are another way to specify the regions where the forecasts apply. You can, for example, get this same text report by simply typing “Metarea IV” into Google, which will find for you a World Meterological Organization (WMO) site that gives weather reports by metarea. That link will also give you the Navtex stations that broadcast the report. This report actually does not cover all of Metarea IV, but all of this region covered lies within Metarea IV.

CCODE/1:31:04:01:00/AOW/NWS/CCODE
SUPERSEDED BY NEXT ISSUANCE IN 6 HOURS
Text/voice reports are issued 4 times a day, just like the weather maps... and we shall see they are valid at the synoptic times. (C-Codes are instructions to the Inmarsat SafetyNet system on the nature of the message.)

SEAS GIVEN AS SIGNIFICANT WAVE HEIGHT...WHICH IS THE AVERAGE
HEIGHT OF THE HIGHEST 1/3 OF THE WAVES. INDIVIDUAL WAVES MAY
BE MORE THAN TWICE THE SIGNIFICANT WAVE HEIGHT
We have in the course a table that explains in detail the statistics related to SWH. Note, however, that they first use the word “seas” then switch to “waves” without any explanation. This is not very tidy. We have to refer to the NWS glossary (linked in WXTL) and only hope they are using their own terms. Namely: seas are combined seas made up of swells and wind waves.

SECURITE
This line is proof that this is indeed a transcript of something that is broadcast over the radio, because it is a radio announcement (pronounced ‘say cur eh tay’) marking the broadcast as important to navigation. The other such announcements are mayday (an emergency needing immediate help) and pan pan (meaning an important announcement about navigation that might be a hazard to you).

NORTH ATLANTIC NORTH OF 31N TO 67N AND WEST OF 35W
This line defines the region covered by the present report, and we note from this that it is not really the full metarea iv, which is defined as “The western part of the North Atlantic Ocean eastwards of the North American coast to 35°W, from 7°N to 67°N, including the Gulf of Mexico and Caribbean Sea.” So this high seas report is skipping the southern parts covered by the National Hurricane Center.

.WARNINGS.
Which includes Warnings in the Synopsis and Warnings in the Forecasts. The synopsis parts (which apply to the 12z map) have been marked in green. In each of the sections to follow there will be a note on the synopsis, which is a description of the surface analysis map valid at 12z, followed by how certain features will change in the next 24h and then 48h. The times of these forecasts are given above. There is, at least in this example, a dot before the forecast lines.

The next page should be printed to compare with the maps that follow.

The synopsis part of this corresponding to the 12z map is shown in Fig 1 plotted on a Universal Plotting Sheet followed by the actual map with the plot overlaid on it.

After that are the maps from 24h and for 48h so you can compare the text with the maps. 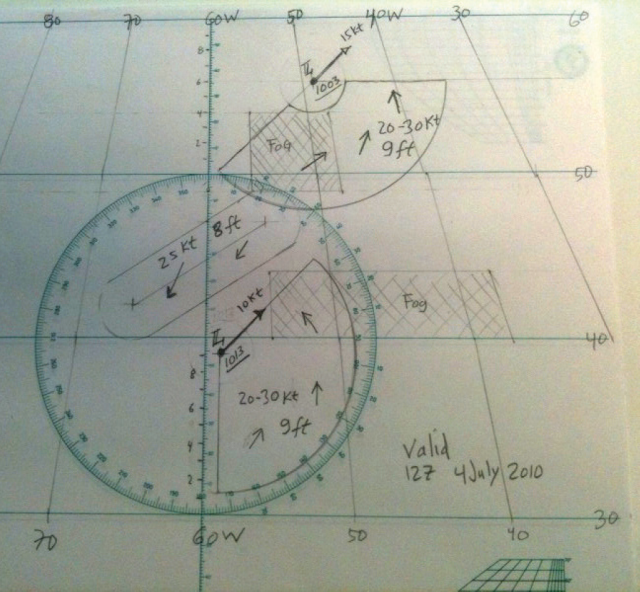 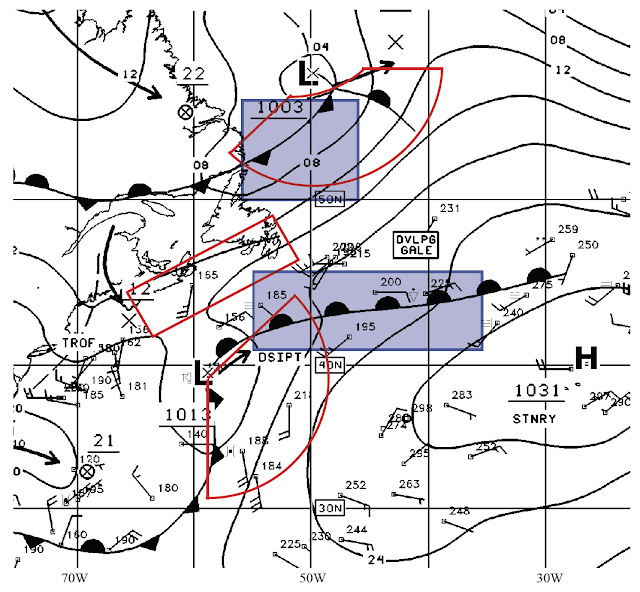 Figure 2. Surface analysis, valid 12z, made at 14:57UTC, by same forecaster. The discussion of the text report is fresher, in that it was made at 1640 which is 90 minutes later. He may have had more to look at then, as there are some differences. Namely he does not mention the front in the synopsis probably because there is not much wind with it at the time, but this does become a factor in the forecasts. Also he was likely looking at satellite photos as his description of the fog does not match exactly what we see in the ship reports—the small horizontal lines are fog reports. Notice that we learn from the text reports about the fog NE of Newfoundland, as that was not indicated in the map.

This is clearly a complex map with a lot going on and changing. But the text report has highlighted the key locations of strong wind, and if you compare to the forecasts and make similar pictures, you will see how things are evolving. 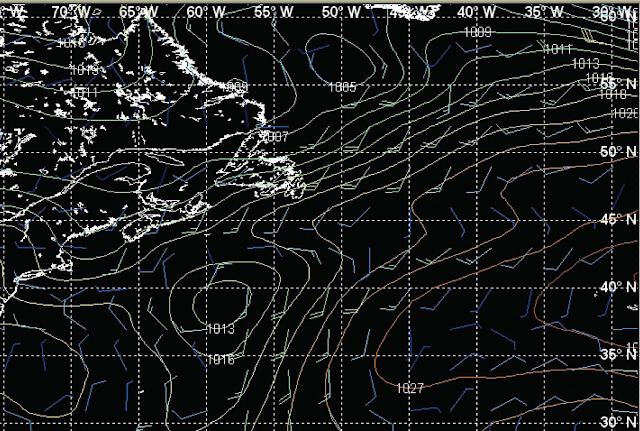 Figure 3. Above: GFS model output for 12z, July 4, 2010 to compare with earlier pictures. Below: The corresponding map from NWS, repeated from previous page. 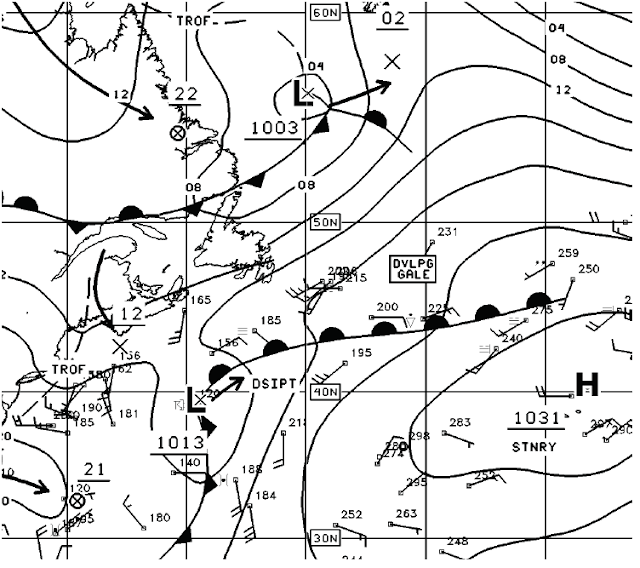 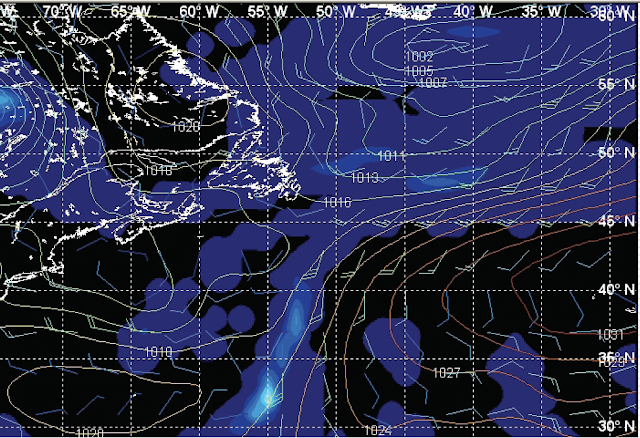 Figure 4. Above: GFS model output for 12z, July 5, 2010 to compare with earlier pictures. This would be the 24 forecast. The blue is forecasted precipitation. Compare these with the voice forecast from July 4, i.e., print them out and plot the forecasted winds on top of them. 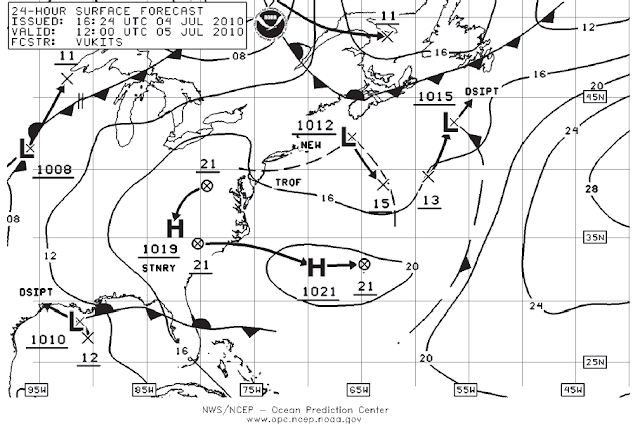 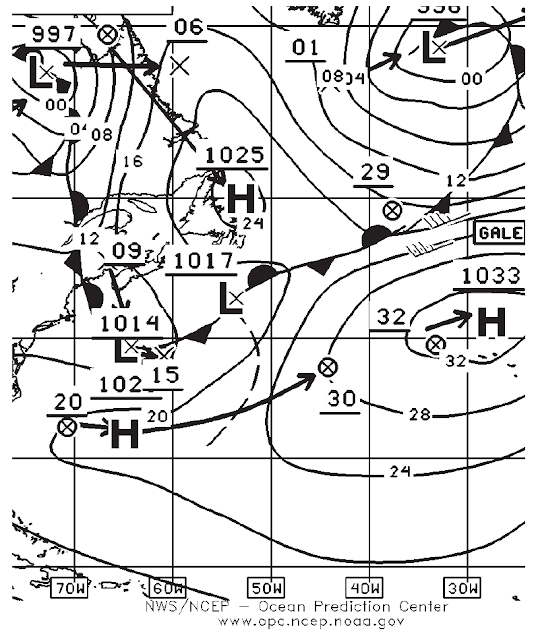 Figure 5. Above: NWS 48-hr forecast map valid 12z, july 6, 2010 to compare with earlier pictures. Below: The corresponding GFS model forecast in GRIB format. As an exercise, plot in the predictions from the July 4 voice/text report on these maps. 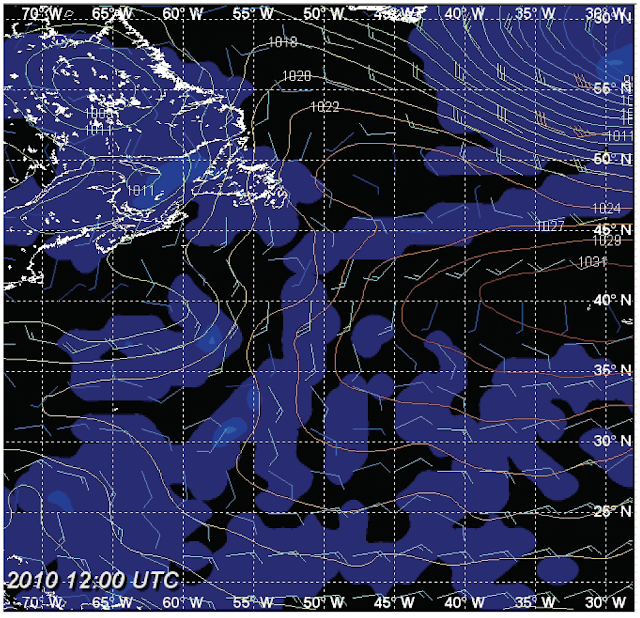