Who Is Ahead in an Ocean Race?

In a typical ocean yacht race there is a daily position report from all vessels giving their position at some predetermined time, sometimes along with wind and pressure. A key job of the navigator is to analyze these relative positions to see how the race is progressing, and who is doing what. In the old days, I would do this with a universal plotting sheet and compute great circle and other distances with a hand held calculator. Looking over the discussion of this topic in our Weather Trainer program, I discovered some of the old school discussion was still there, which has led to this note—and an update of that topic in the program. These days we have better tools... although there can still be virtues to doing this by hand on a plotting sheet or paper chart.

These days using tactical navigation programs, we have several new options, including just plotting all the positions we care about right in the main navigation program we are using, or we could run a separate nav program for this purpose, even in a separate computer. You could, for example, be doing your primary weather routing with Expedition or Deckman, and use something like OpenCPN for a running log of vessel positions and related analysis. This has the virtue of allowing two people to work on the navigation at the same time, plus it allows for more experimental plotting and evaluation without tying up the main nav computer or risking confusing anything.  I will do this example here using OpenCPN. At the end here we look at even more automated methods.

For a real world example, we use two days of reports from the 2014 Vic-Maui Race. Other than looking for some data online, this is otherwise a random choice. Then we just went a couple days into the race and said we will use Division C, looking at July 7 and July 8. The relative positions of these two days are shown below. 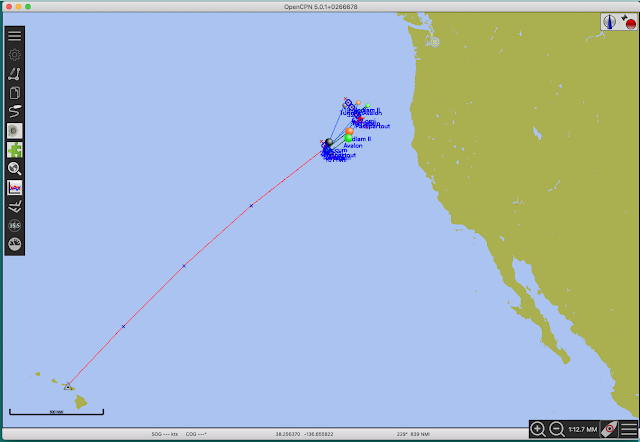 The top cluster is the July 7 reports, below it the July 8 reports, along with a great circle (GC) route to Maui—although that is not at all the intended route of any vessel at this stage, which is typically  more toward something like 40N, 130W to get around the Pacific High.

To see how this works on your own you should be able to take any race, any division, and any two days. These data are shown below. 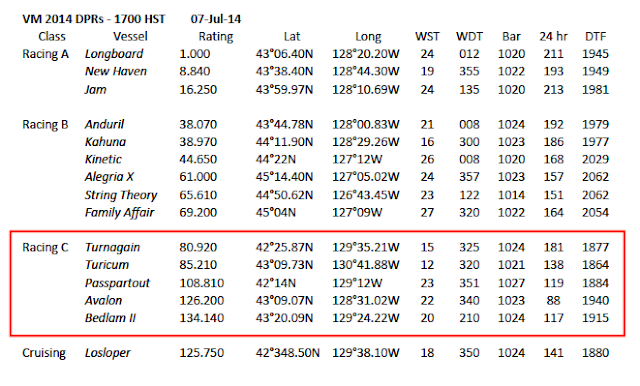 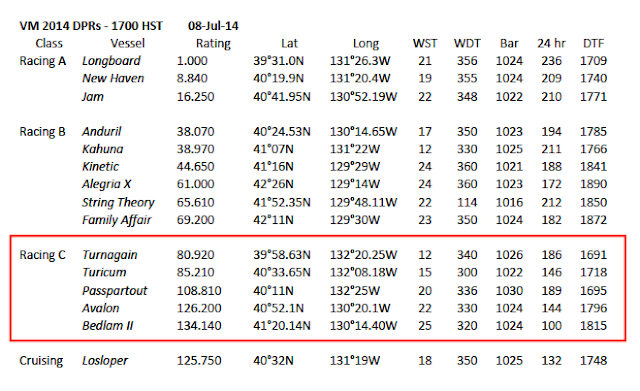 When the data is received over the radio, it is usually recorded in forms that are part of the race packet. Once the data are recorded, we then transfer them to a chart, plotting sheet, spreadsheet, or as in this case, we plot the positions in OpenCPN.

On July 7 at check in time, we only know what is in the top report.  These are plotted below and for this exercise, we assume we are the vessel Passpartout. 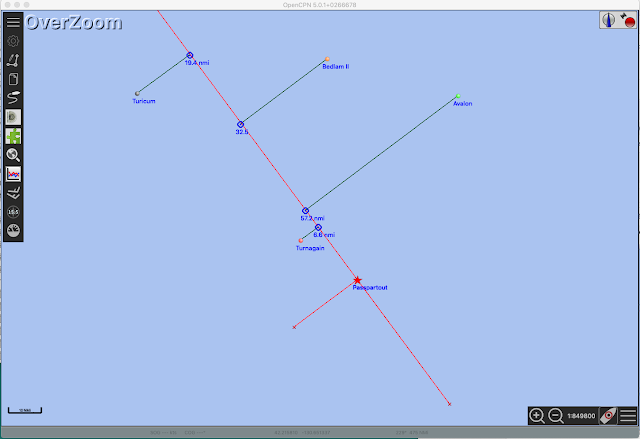 Our own (pretend!) vessel position is marked by a star. From this position we compute the initial heading of the GC route to the finish line, and draw that in red, about 233 T in this case. Then we construct with the route tool a line perpendicular to that GC heading, also shown in red here. This gives us a quick look at relative positions. All vessels on the red line are same distance from the finish.

We see that Turnagain is 6.6 nmi ahead of us, and Turicum is 19.4 nmi ahead of us, and the other two are rather far behind, 32.5 nmi and 57.2. With only one day of reports, we do not yet know of routes and speeds, however, we do know one important thing: we are the southernmost boat. In this race at this point, that could be an advantage.  But now we just have to see how things progress by looking at July 8. 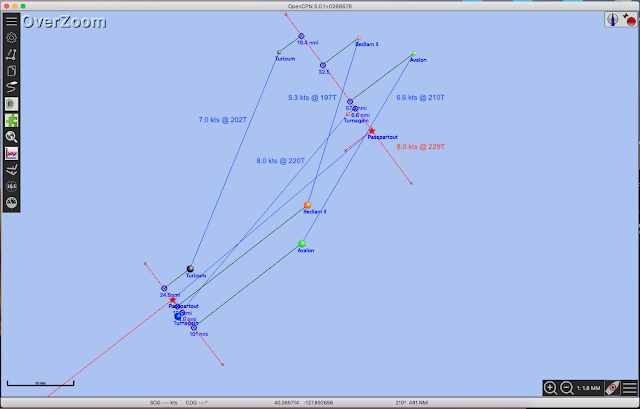 Now we can see what the fleet has been doing by just making a route between day 7 and day 8 positions, and divide by 24 to get SMG. Zooming in on Day 8 we see the following. 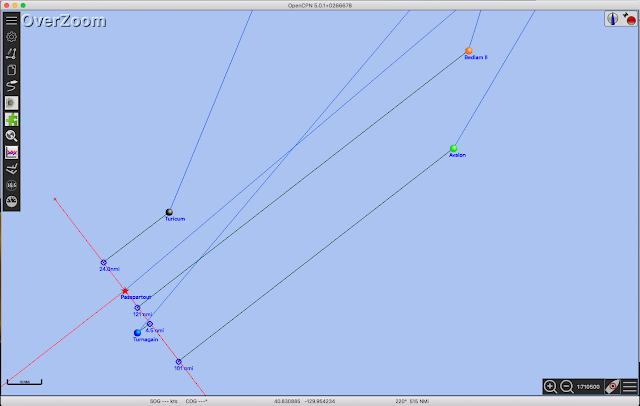 Turnagain remains ahead of us, but we are sailing same SMG (8.0 kts) and we have gained 2.1 nmi on them (6.6 to 4.5) This is because for now we are sailing closer to the GC heading; they are sailing about 9º lower, more to the south.

We can't rely on the true wind reports given—notice they are all over the board in the reports—but we do know the wind has been N-NW, and they are sailing lower and making the same 8 kts.... and so on.  This is the type of analysis one can do with these plots.

Another way to do this is to enter the daily reports in a programmed spreadsheet and have it auto compute all you care about. You know the destination, so you can compute GC distances do go for every vessel and then compare that to your GC distance, which will directly tell you who is ahead and by how much. With this system you can fold in ratings for a true output of the race status. You can also of course compute SMG and CMG for each, vessel.  This can all be set up and tested before the race. Nevertheless, there can still be virtue in seeing how the routes compare graphically.

You also likely know at some point the speed potential of your competitors, so if a SMG seems to low, and the CMG too high or too low, then you know they have likely jibed during that route. It appears in this case that Turicum  had jibed during these past 24 hr.  Recall when we draw in that line this is only course made good, we do not know the actual track taken. This is why jibes might be carried out right after checking in whenever tactically feasible so they have the biggest impact, before giving away that you have jibed.

More modern methods are even more intense! Several companies offer vessel tracking services with vessel positions posted online providing a wonderful way for spectators to follow the race. These services are popular with cruising sailors as well, offering a way for friends and family to follow along the voyage. Tracked positions are updated typically every hour, but in some cases like the Swiftsure Race plot shown below, they are essentially live data at the time of the race. These data are then often archived to be viewed later on. 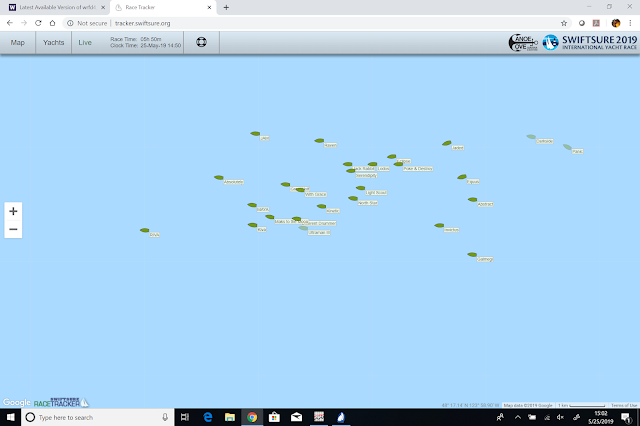 This is early in the 2019 race, picture compliments of Andrew Haliburton, who was navigating Riva, the leading boat at this time.

These tracking services were originally intended for spectators, but there is cell phone coverage over the full 80 nmi of this race course (along the Strait of Juan de Fuca between Washington state and BC, Canada), and anyone can download the positions—on land, or on the water taking part in the race. This gives a very nice near real time snapshot of who is doing what, but you would have to do custom programming to capture the data digitally.

For ocean races there is no cell phone connections, but we still have satphones and Iridium Go devices that can be used to load any internet webpage, but albeit at very slow and expensive rates. Most large races have some internet coverage for spectators, with YB Tracking (formerly "Yellow Brick") being one of the world leaders in this service. Again, this was originally intended for spectators at home, but it is not illegal to access this from your boat at sea if you are willing to spend the money to do so.

YB race positions are typically updated every hour at a specific time, so you can set your watch to remind you when there are new data. This way you get to see all the positions laid out on an hourly basis so you know what your competitors are doing.

Sophisticated racing software such Expedition and Deckman have access to the YB database built right into the programs and anticipating this, the racing instructions often include the link to the data along with the ID of the race. Here, for example, is section 10.3 from the 2019 Sydeny Hobart Sailing Instructions

10.3 RRS 41: Further to NoR 7.3(a), Whilst racing a boat may retrieve data from the standings pages of the event website or from https://www.rolexsydneyhobart.com/standings/lite or from the text-based feeds provided at https://yb.tl/Links/rolexs2h2019.


In Expedition, this service is accessed via the Sail tab: 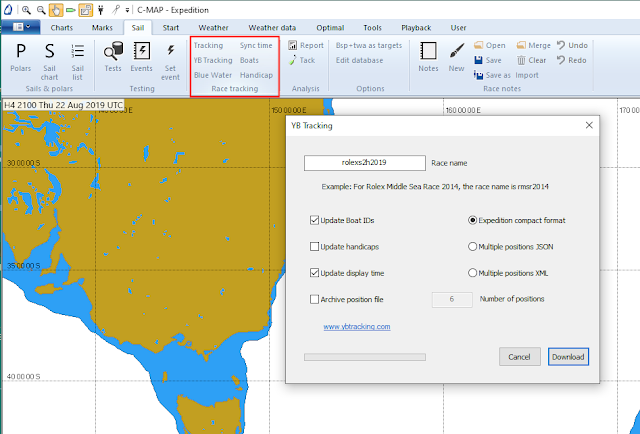 Below are a couple sample Expedition YB tracking plots from the 2019 Sydney Hobart Race. 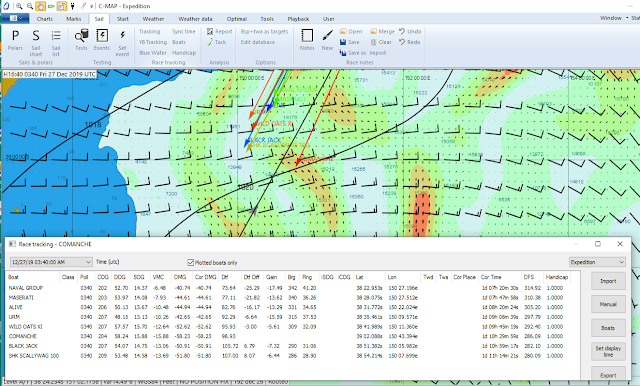 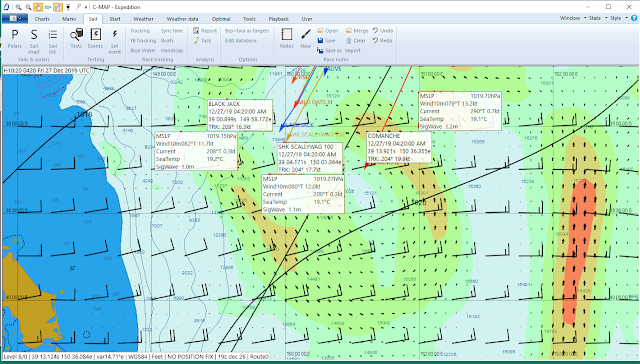 The popups do not all happen at once in Expedition. These are from two different tabs; the sailing tab showing tracking data, and the weather tab showing GRIB data.

With this type of near live information, the navigator knows what each is doing and conditions at their location. If you have polars for your competitors you can compute optimal routes for them as well... at each stage thinking over what you can do that would be smarter than what the competitors might do.

Expedition has a Scheduler function that can be set to update the tracking automatically. These data in this race are updated every 10 minutes. Then the user just presses the Sync Time button and the latest tracking is shown along with the right wind data for that time.  There are no more secret jibes.

This kind of tracking option is one of the major changes in yacht racing over the past few years. Another one on the horizon appears to be how outside assistance with regard to weather data will be defined. An interesting new topic!