Bruce Stark’s classic treatment of the lunar distance method in 1995 sparked renewed interest in celestial navigation worldwide, quite beyond that one specialized technique. His work will be remembered as a key step in the history of marine navigation. 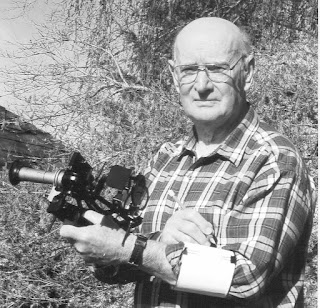 He died peacefully in a Eugene OR area hospital following carotid artery surgery.  His wife Janice had close contact with him during this time, which was an unusual blessing in these COVID days that often prevent patient visits.

Bruce Stark became interested in celestial navigation as a sailor and outdoorsman in the late 70s, when he began the painstaking journey to becoming a leading expert on the navigation of Lewis and Clark, and especially the esoteric sub topic of celestial navigation devoted to finding longitude from sextant measurements of the distance between the moon and other celestial bodies, called the Lunar Distance Method. His innovative book on a new solution to this problem took him 20 years to perfect, but it received instant praise by experts in several countries. 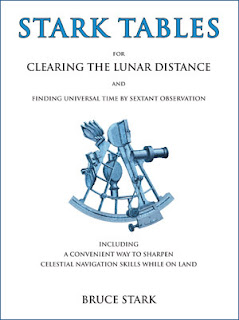 Navigators had been following his reports on the development of his method along with extended notes on the navigation of Lewis and Clark in the Navigation Foundation Newsletters (NN), where they are still available to the public at www.navigationfoundation.com. Admiral Thomas Davies, founder of the organization, was the first to note the value of the work followed by in-depth reviews from several international experts.

Robert Eno from Iqaluit, Canada (NN, Issue 65, Fall 1999, page 7) in an extensive study of the method included these observations:

"Stark has taken all of the tedious and complex calculations formerly required for lunars and reduced the whole process to a simple exercise of addition and subtraction."

"Had he been born 200 years ago, he might have been remembered with the same veneration as Raper and Chauvenet whose names are now synonymous with lunars. "

"Now that Stark has made the process so simple, there is no excuse for the serious navigator not to try his hand at lunars."

The main point being made is, the Stark Tables provide an all manual solution. We have many ways to solve lunars these days with computer computations, but his method is all paper, no batteries required.

"I was astonished by their ingenuity. They don't repeat old solutions mechanically, but are significantly better than renowned works of the past, although they don't misuse the modern technical possibilities and go the fully traditional way of tabular and paper solution. It had to be an intellectual adventure to compose them and it is a delight to study them. "

"After Bruce Stark had published his tables, every sailing navigator (fondling the GPS in his pocket) can revert to the sea history in his practice very easily, if he chooses. He can be sure that with these Tables, the history of Lunar Distances is consummated now and the long line of rigorous methods for clearing them ends successfully—and for the first time, after all of these years."

The reason the Stark Tables kindled such renewed interest in cel nav and sextant work—which is ongoing—is the fact that the special sextant measurements required are difficult, taking exceptional sextant skill. But at the time of his book, there were not quick computer solutions to the lunar analysis, so the analysis of the sights was also very difficult. With the advent of his book, navigators had a way to hone their skills in sextant sights and then a way to see if they got it right. And on top of that, there is no heaving deck and ocean horizon needed for this practice. You can do this from a chair in your backyard.

We frankly do not  have much call for this method in practical navigation, but learning it makes you a better navigator, much as taking a few lessons on aerobatics makes you a better private pilot. On the other hand, a Long Term Nautical Almanac, including a set of Pre-computed Lunar Distances, along with the Stark Tables constitutes a Doomsday Navigation Kit, with which you can find your accurate location on earth without any semblance of technology or even civilization at all, period. There is not really any other way to do that.

Bruce had the devotion to detail needed for his work and a very reserved personality. It was Starpath Publications  who boldly added "Stark Tables" to his original title much later when we joined in to help with its publication and distribution.

So it might be understood how pleased we were when he agreed to present a seminar here at Starpath on lunar distance and related Lewis and Clark navigation. This was in April of 2001, organized in conjunction with John Lewis, Puget Sound Maritime Historical Society, along with a representative of the National Park Service.  Bruce was nervous about an event like this that he had not done before, but it all went very well, and we became friends ever since, ultimately leading to our publication of his book. He went on to participate in other National Park Service events about Lewis and Clark.

We were doubly fortunate and extremely grateful for his later donation of much of his navigation research library to Starpath, which is indexed online at www.starpath.com/library. We have made remote use of the documents open to the public and a several researchers have taken advantage of that.

Bruce was active in navigational matters up to several years ago. One of his later interests was readdressing how much cel nav computations could be carried out with a simple slide rule, which he and I both carried around on our belts in early college days.

What always struck me was our shared strong opinion that dead reckoning remains the basis of good navigation. In many posts he would note that quality dead reckoning was as important as cel nav itself, and he ask for and motivated others to write more about it in the Newsletter, which was just one more important contribution to navigation practice.