These notes are intended as background for several videos illustrating the purchase and installation of S-63 charts.

• We are spoiled in the US. Our ENC charts are S-57 format, unencrypted and updated weekly, but we are not forced to update them if we do not want to. They run on any compatible device, in any compatible electronic charting system (ECS), and they are free to all users.

• To my knowledge, New Zealand is the only other nation to offer their official ENC free to the mariners (discussed below).

• Inland ENC (IENC), on the other hand, are free from every nation. These cover rivers and some limited coastal waters around the estuaries. US IENC cover only the "Western Rivers," as defined in the Navigation Rules. These charts have their own standards, similar to ENC, but not the same.

• In contrast, almost all international ENC are encrypted in the S-63 format, and must be purchased. They are restricted to a specific navigation program (ECS or ECDIS), running on a specific computer or dedicated hardware, and they must be updated (repurchased) on a fixed scale of 3 mo, 6 mo, or 12 mo.

• Most places where we buy S-63 charts have some form of graphic index to select from, but we might want more detail about individual charts than they offer, thus we recommend finding charts from the IC-ENC version that you can get to from starpath.com/getcharts (item 22a).  See video demo below.

How to learn what international charts are available (5:20)

• Expired charts can still be viewed, but updates are no longer available. A warning must show in the nav program when accessing expired charts; this is a requirement of the S-63 compatibility certification of the ECS, reflected in the existence of a file called IHO.pub located somewhere in your ECS folder structure.

• To accommodate the encryption and restrictions on S-63 charts, the purchase and installation of the charts are more complex than it is for use of S-57 charts.

• Fortunately, New Zealand offers all of their official ENC free to users in the S-63 format, so we can all practice both the "purchase" and installation of S-623 charts.  We outline that process in our new book Introduction to Electronic Chart Navigation, 2nd Edition.  The free sample of that book includes an outline of the process.

• Despite these extra steps required, prudent mariners sailing in foreign waters will likely want official copies of the most important charts. Others might be tempted to use only the convenient and relatively low cost third party products, but there are many documented examples of errors or inadequacies of these charts.  Indeed, though rarely read, every time you open one of these apps you must accept the End User Agreements, samples of which are in our textbook. 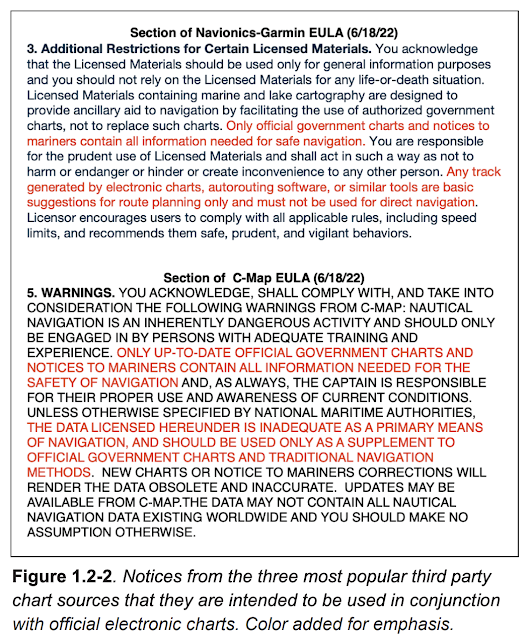 • In short, prudent seamanship calls for use of official, updated charts, and indeed for just a few of them it is not that expensive: roughly 10 euros each for a 3 month subscription. The price of the charts are pretty much the same from any source.

• Obviously not sure how this evolves, but now, 9/17/22, is a good time to buy them. The euro is on parr with the dollar (roughly  23% less than last year) and most of these are sold in euros.

• Can likely get by with the 3 month versions—keeping in mind we are used to paper charts that were updated sometimes only on a year or two basis, since we can check the Local Notices to Mariners or Light List. The Light Lists now are typically updated online weekly.

• What is needed? The two main documents needed that are unique to your installation have names:  The User permit, which is a 28 character number and a permit.txt file, which lists key numbers that relate your installation to the chart set supplied to the source.

• The user permit comes from your ECS (navigation software) supplier. For commercial programs that you bought, this permit is usually free. It is either already in the program somewhere, or you write to where you bought the program and ask for it.  The user permit will apply to just your copy of the program running in a specific computer. If you change computers, you may need to ask for a new user permit.

• When using free ECS such as OpenCPN or qtVlm, there is an extra step required because these ECS can be loaded into any computer. This is resolved by requiring a onetime modest purchase for a plugin (10 to 20 euros) that configures the program to handle S-63 charts.  In that process you run a function that creates a fingerprint file or number that identifies your computer and you submit that with the plugin purchase to get a key that opens up your nav program to handling S-63 charts. Both of these programs listed allow for the plugin to be used on 3 computers.

• More on shared usage: the S-63 charts are tied to the User Permit used when the charts were purchased. So the limitation on their display depends on the rules established by the navigation software. As noted, qtVlm and OpenCPN each allow a User Permit to be used on three separate installations. Commercial nav software generally associate the User Permit with the software instance. Some have rules that allow only one instance of the program, others allow for two simultaneous instances—a main computer and a backup. Most allow for unregistering the program on one device and moving it to another, in which case the User Permit would go with it.

• Most ECS offer a set of instructions for the installation of S-63 charts, usually with a sequence of links that should put all the components in the right place. The final folder structure of the charts is crucial. If you find that the packaged instructions do  not work as expected, then create the file structure manually as we explain in our textbook, and then copy that folder to the charts folder or S63 folder in your ECS folder structure and link to that one to access the charts. This should also facilitate the updating of the charts as they become available.

• Updating S63 ENC can be tricky, because update files (ending .003, .004, etc) refer to a specific base set (.000). With good internet connections, the easiest route is just download the latest base set and latest update set and install them, as if starting from scratch.

• Again, the free S-63 charts from NZ is an excellent way to practice with obtaining S-63 charts and the associated files needed. The permit.txt file is the crucial one, but there are a couple others that are useful as well. To use the system, you need to first set up a free account using a valid email address. It is safe and non-invasive.

• We illustrate an actual purchase using ChartWorld online. There are numerous places to purchase these, including storefront and online companies, but ChartWorld (in Germany) has an easy interface and offers all formats of charts globally, not just the S-63. They are also part of SevenCs, which is a world leader in ENC production and display. To use the system, you need to first set up a free account using a valid email address. It is safe and non-invasive.

• To download the charts from ChartWorld: you will receive a link from them like ftp://www.chartworld.com/DC12345, where the last bit is your installation ID, unique to a User Permit. To access this in Win10 or Win11, open File Explorer and paste this in the address bar. You can then drag them to a folder of choice.  All charts you buy now or later with that User Permit will be located there.

• Below are a few video illustrations of installing S-63 charts.

— check that all is ok

— get the charts and move then to the right folder

— then use purchased charts as from ChartWorld

— assign the folder to the charts

— this is done from the S63 tab, not the main vector chart tab

Summary of the OpenCPN process.

— create hardware fingerprint, use it at o-charts.org to get an install permit