Our 50-90 Rule for estimating tidal current speeds between tabulated peak currents and slacks has been adopted by the US Power Squadrons, who have developed a form for its use. What is less well known is our Slow Water Rule for estimating the time the tidal current will remain below 0.5 kts at each slack time. This rule is actually based on the 50-90 Rule as is shown below.

The Slow Water Rule states that the current stays less than 0.5 kts on either side of slack for a time (in minutes) equal to 60 minutes divided by the peak current speed in knots. This period is usually different on each side of the slack for mixed semidiurnal tides. That very simple form assumes the period from peak to slack is equal to the global semidiurnal average of 3 hr, but there are many cases where this varies from just 2 to over 5. Thus to make the Rule more accurate, replace the 60 min with one third of the actual time interval between peak and slack. 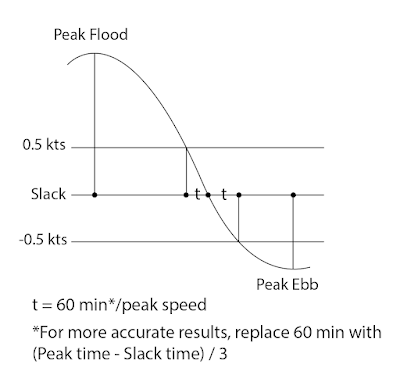 A main purpose of this post is to document how this Slow Water Rule comes from the 50-90 Rule, and that is shown in the hand drawn image below. 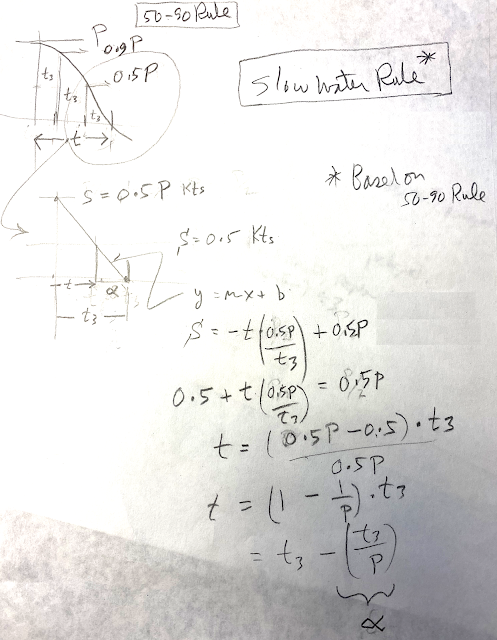 In this sketch, t3 is one third of the slack to peak times.  Alpha is the slow water estimate we propose.
Granted, we are looking backwards with these efforts to do navigation in the head, on the wing. Traditional paper charts are being completely replaced with electronic charts (ENC) and with that more and more mariners will be using some form of electronic chart system (ECS) for their navigation...more commonly called just a "navigation app" or "echart app." Popular free ones are OpenCPN and qtVlm, both of which include excellent tide and currents functions that display and plot the tides or currents—which pretty much answer any question we have about this crucial data. Commercial nav programs also, of course, include excellent tide and current presentations that answer tide and current questions with a couple mouse clicks.
In short, traditional methods in all aspects of navigation are likely to be set aside as we move more into more electronic charting. We complained about this when GPS came on the scene, and there will likely be more complaining as the charts get transformed from traditional preprinted fixed editions to the new user-designed and user-printed NOAA Custom Charts (NCC).  It will take a while for the NCC to settle in, but I am confident that in the end they will be in fact superior to the traditional charts they are replacing.