HRRR (high resolution rapid refresh) is one of the premier regional wind models from NOAA. The native data are distributed through NOMADS in a grib2 format that uses a Lambert projection, which is very similar to a great circle projection. OpenCPN at present cannot read and display that format, as is the case with many echart programs and grib viewers. With that limitation in mind, Saildocs has done a service for mariners by converting the Lambert projection into a rectangular Lat-Lon projection that can be read in OpenCPN and other grib viewers.

The attached video shows the process of obtaining the HRRR grib from Saildocs, which is straight-forward, with a couple precautions to guard against large files. We propose a hybrid solution that lets OpenCPN create the email request that we then tweak a bit before sending to Saildocs.

There are two formats for the HRRR data. The standard model forecasts are computed every hour and there is a forecast made for each hour going forward, out to 18 hr. There is just over a 1.5-hr latency, meaning that a forecast computed at say 15z (z=UTC) will have the first of the 18 hourly forecasts valid at 15z, but we will not be able to download this forecast until about 1635z.

The second format is same as above, but at the synoptic times of 00, 06, 12, and 18z the forecast extends out to 48 hr. Saildocs calls the standard version HRRR and the extended version is HRRRX. The latency for this one is just over 2h (0205). Thus the 48h forecast ran at 12z will be available at about 1405.

The main point I want to stress here, however, is the native HRRR CONUS (continental US) forecasts obtained from NOMADS present the wind direction relative to the orientation of the grid, which in the Lambert projection does not line up with the North-South meridians, and this correction is not accounted for in the HRRR data from Saildocs. An overview of the corrections is shown below. 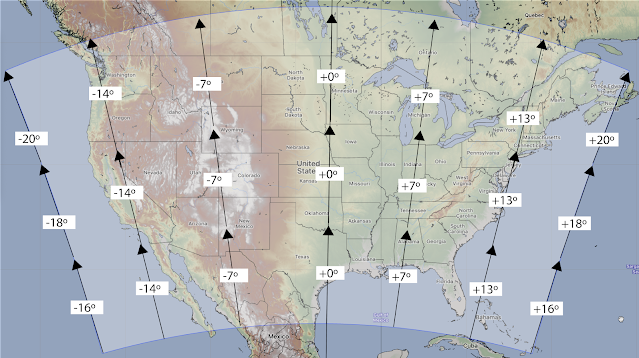 The HRRR CONUS coverage map is from luckgrib.com/models. I have overlaid the approximate orientations of the grids.

These shifts of roughy ± 15º along the coasts are not really so significant for a static forecast, keeping in mind that the the model data themselves and all the buoys we read the wind from are only accurate to ± 10º or so.  But this offset is something to be aware of when doing optimum weather routing computations as this shift can have a significant effect on those results.

The nominal average of about 14º to 16º right along the coast is correct for the actual grid orientation but the projection conversion process introduces some spread to this. The values pictured above should be considered ±3º or so.

We focus on OpenCPN in the video demo below, but this same correction would be called for when viewing the Saildocs HRRR gribs in any viewer.

I should stress that the programs Expedition and LuckGrib are two that provide their own access to the native HRRR data and their presentations are correct as displayed.

Video demo of the topics above.