Timekeeping in Navigation and Weather

There are a dozen or so timekeeping systems used in navigation and weather, and we cannot avoid using several of them from the nav station. In the end, the main time we care about is GMT, more properly called UTC, Universal Coordinated Time. All weather data is coordinated and reported according to UTC. In principle we should all be calling this UTC, not GMT, but GMT is still common. It is rather like the fact that we should all be using the metric system for these two subjects—it is in fact US law that we should—but no one does, and no one complains. The BBC still uses GMT.

UTC is the world standard time system used by all nations to coordinate weather and navigation information. It corresponds to the time used in Greenwich England for half of the year, formerly called Greenwich Mean Time. The town of Greenwich actually switches to daylight saving time in the summer, but all scientists and navigators continue with UTC. The official UTC system (like GMT) does not employ any form of daylight saving time.

Since all weather maps and GPS information uses UTC it would seem we would want to keep our watches and ship's clocks on UTC for convenience. It turns out this is not very convenient in practice. For daily activity—at home or underway—it is much better to have our clocks reading close to what we are used to, which is often referred to as local time.

Local time, however, is a nebulous term, which when used should always be followed up with the definition of what we mean. There are two basic times it could mean. Local time could be the local standard time (that is well-defined) or it could be the local zone time (also well-defined). To confuse matters a bit, local time is also sometimes used in phrases such as Pacific Time, which is intended to be Pacific Standard Time in the winter and Pacific Daylight Time in the summer—the one phrase covering both, depending on the season.

Zone time is by far the more precise of the several local times. It is the one that commercial ships and navies use when crossing an ocean—or we all use when sitting at the USCG office taking a license exam! Zone time is determined entirely by the longitude of your vessel at the time you record it. It will differ from UTC by a whole number of hours called the zone description (ZD).

If you are keeping zone time (ZT), then you can find UTC from:

where, again, the ZD is determined by your longitude. This formula is the one that determines (or helps you remember) the sign (±) of the ZD. If your location is slow on UTC, ie any west longitude, then the ZD of that location is +. Eastern longitudes have negative ZDs.

Zone time never uses daylight saving time. It is used worldwide. Zone time is never used in civilian matters; it is only for ocean navigation. One could argue that official NOAA Tide and Current Tables are given in what is essentially ZT, but we are more likely to use a reproduction of these, which converts the times to standard times. 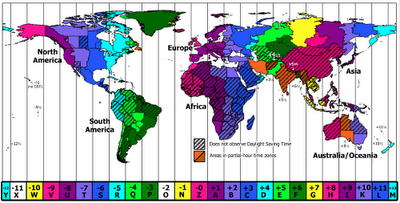 Gray lines and bottom labels define zone time zones; boundaries shown on map defines standard time zones. Unfortunately, this nice graphic from nist.gov has the time zones labeled in the landsman's convention. The navigator's ZD of the US West Coast is +8, not -8. Since Zone 0 (UTC) is labeled Z, UTC is often called zulu time, and noted ie 1200z. We leave it to those interested in history to discover why there is no J zone. There was a reason. And if you want to ask trick questions on your navigation tests, note that ZD +12 and ZD -12 are just 30m wide, not the normal 1h.

Standard time is the time system used for civilian matters and for near coastal and inland navigation. Some coastal weather forecasts specify the local standard time in addition to the UTC of the report. Standard time is essentially the local zone time modified by politics and geography, and then susceptible to changes for daylight saving time.

Standard time zones do not follow longitude lines rigorously as do the zone-time zones, but they will often be approximately along those lines, diverting to follow state and country boundaries, or maybe a river flow. We still speak of the zone descriptions of standard zones in the same way as zone times, namely Eastern Standard Time (EST) has ZD = +5. Eastern Daylight Time would be ZD = +4, and so on. In other words, we would have UTC = EDT + 4h.

A complexity arises because standard times are often described outside of marine navigation circles as, for example, EDT being 4h behind UTC or slow on UTC. This leads to writing EDT = UTC – 4h. This is the same equation (with sides swapped), but in this line of thinking the time zone is described or labeled as -4h. Thus we often see computer and smart phone apps using reversed signs for the time zones, so we have to keep an eye out on this detail. 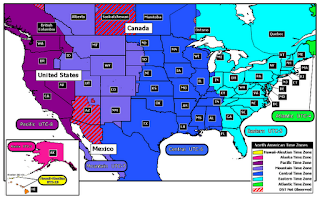 North American time zones. From nist.gov. That site along with time.gov are good sources for various aspects and history of timekeeping.

Watch time is the practical solution to time keeping in navigation and weather. It is simply the time on your watch. Thus to navigate by WT, I just need to know the zone description of my watch. If I happen to have my watch set on Pacific Daylight Time, that would correspond to ZD = +7. Thus the ZD of my watch is +7 and that is all I need to know, no matter what longitude I am at as I cross the Pacific.

No matter where I am in the world, I find UTC by:

This is by far the best way to navigate, and we should always do so unless we are compelled to use ZT by labor laws or unions or some government regulation. It is easy to see that if you work day and night on ocean crossing vessels, you would want some semblance of order to your daylight and meal times, which would justify changing the ship's clocks each time you cross a time zone.

On a private vessel, however, this time changing just adds tremendous confusion to your weather and navigation. It is much better to just live with the fact that mid day might be 2 pm on your watch by the time you arrive.... or set it ahead before you leave. In other words, you go an hour or two off local time as you proceed, but that is not distracting. To minimize timekeeping errors do not change your watch time when underway. Wait till you arrive. You are free to set the ZD of your watch that works best for you.

For completeness, we include here also the very worst type of timekeeping, the one called Chronometer Time. It is UTC kept on a 12-hour watch face, without specifying AM or PM! Absolutely no one in the world would consider using such a time system—that is, almost no one. This is the time system used on USCG celestial navigation exams. It is the way they help support navigation schools, and we are grateful to them.
I should add that there are several forms of Universal Time and the conventions on terminology and abbreviations have not settled in yet, which is why so many folks hang on to GMT. The time that is equivalent to GMT is officially called Coordinated Universal Time, Type 1, and abbreviated UTC1, though this formal terminology is not often seen in navigation or weather resources. This is usually abbreviated as UT (Nautical Almanac) and UTC (NOAA weather maps). Some weather maps and forecasts also use the abbreviation Z (zulu) to mark a UTC, as we used to do for GMT. Thus when we see a map valid at 1200Z it means 1200 UTC.

There are other time systems that have implications to navigation and weather, but only indirectly. These include the Julian Time system used by astronomers to keep track of an absolute time stamp for events in the past and future and the Solar Time system used to keep track of time relative to the time the sun crosses your meridian. The latter was used commonly in the old days of navigation, but no longer, though it still comes to play when predicting the passage times of weather satellites in sun-synchronous orbits.
Posted by David Burch at 9:13 PM

Very glad to find this discussion, as I'd not yet had experience on vessels crossing time zones and wondered how time-keeping matters were organized.

Can you tell us what sort of navigation problems existed before UTC? (Not the problems before longitude.)
Consequently, how did navigating change/improve after the imposition of universal time zones?

Before organized time keeping, navigation was done relative to solar time, meaning relative to local apparent noon. I do not offhand see that time zones themselves mattered so much as just having accurate time.