ASCAT is the name of the scatterometer that provides true wind speed and direction on the ocean surface about once a day in most places.

The scatterometer is on board the EUMETSAT (www.eumetsat.int) satellite Metop-A, so it is helpful for us to know when the satellite will pass by to give us this valuable data.  And I should say up front, there are other ways to figure this but for now we start with the most basic of predicting this pass time from the satellite characteristics and available satellite prediction apps.

It will take some time to get the actual data after it goes by, but the valid time is when it actually  went by...and you may want to know this ahead of time so you can prepare to make some weather map comparisons with the actual winds you can learn from the satellites.

Data are available some 2 to 3h after pass from:

but for now we are discussing the time predictions, not the data.

We know roughly when the satellite will pass by us because it is in a sun synchronous orbit, meaning it crosses the equator every day headed north (ascending node) at the same time relative to the sun. For Metop-A this is 2131 local mean time (LMT).  This is not zone time or standard time or even GMT. It is a special time concept, which is best interpreted as the GMT of the event observed from the Greenwich meridian.  To figure the crossing time at other longitudes, we have to account for the westward motion of the sun at 15º of Lon per hour. Thus on a Lon near Hawaii of exactly 150º W, the ascending node would take place 10h later at 3131 = 0731 the next day.

The satellite circles the earth once every 101 minutes (1h 41m), so the date is not important here; we just want to illustrate the LMT concept.

But this is not very specific prediction information for an arbitrary point on earth for several reasons.  First, the earth is rotating beneath the orbit of the satellite, so the satellite path across the earth tracks to the west as it proceeds north as the earth rotates toward the east. So we don't immediately know what its longitude was when it crossed the equator to reach us at our more westerly longitude.

To make things worse, knowing when it crosses the equator every 102m does not tell us if it will indeed cross at a place that will give us data. In other words, if i am going to get data near HI, it will be in the early morning  around 0730 plus some, but i do not know if i will get it today or not till tomorrow. We also have the descending swath headed south that might hit us as well. 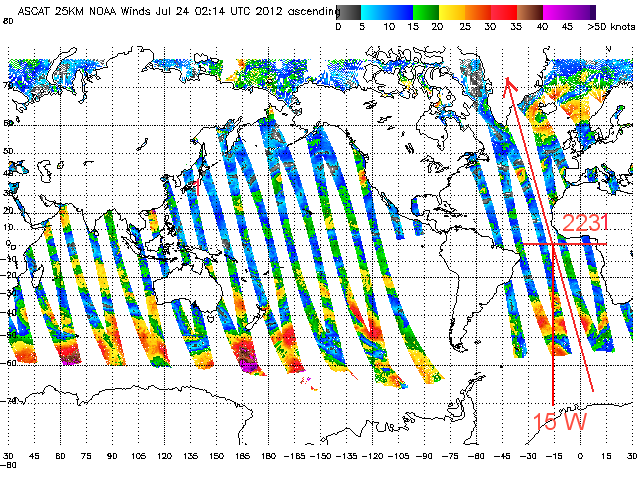 Here we see an ascending pass crossing the equator at 2231 at 15 W (an hour after 2131). The ASCAT data are the two swaths on either side of this track.  This picture shows a total of about 14 ascending passes.  The swaths are the same width on the earth at all latitudes  (500 km) but get wider with Lat due to the map projection, which is similar to a mercator. These pics are from the manati link above. Similar indexes to the data are found at the knmi site. 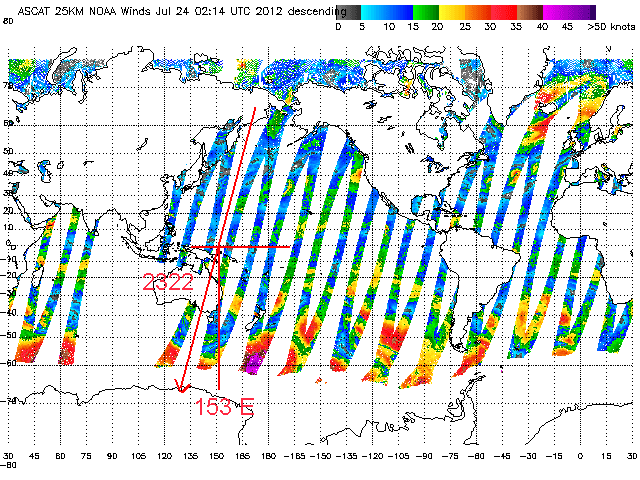 Here we see the satellite coming back down on the other side of the earth 51m later. Note that it does not cross at 15W + 180 = 165E, but farther E by (51/60)x15, at about 153E, because the earth rotated to the east by that amount during the 51m travel over the top. Again the data we are after are the two swaths on either side of this track.

With these complexities, we are generally happy to have some computerized aid to predict the satellite passage times. There are several options to choose from online, as well as computer and smart phone apps.

(1) The Data Center at the University of Wisconsin-Madison Space Science and Engineering Center (www.ssec.wisc.edu/datacenter/METOP-A) has plots online of the Metop-A positions such as shown below.

You can select up to 5 days in advance to get plots like this.  There is no satellite info for various locations, just the times and the paths as shown here.

(2) NOAA recommends an online prediction site at http://www.n2yo.com/satellite/?s=29499, where the last digits are the NORAD ID for Metop-A.

This site projects the path onto Google Earth, and also shows observational information, but to enter a unique lat and lon for observation you have to register on the site. This is non invasive, with no personal info required. A sample output is shown below. The red dot is a vessel position that I entered as 20N, 170W. 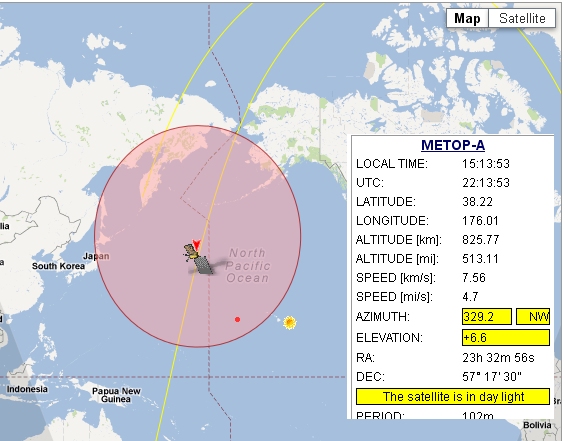 The interface is a bit clunky, as are the ads, but all the data are there. We compare this to the Orbitron display below.

(3) A very neat free PC app called Orbitron not only has a versatile predictor, but you can also use it as a screen saver so Metop-A and OceanSat2 (the OSCAT satellite from India) are always on  your mind!  Get it at www.stoff.pl.  It is postcard software.  The author just asks that you send him a post card if you like it.  We have sent ours. 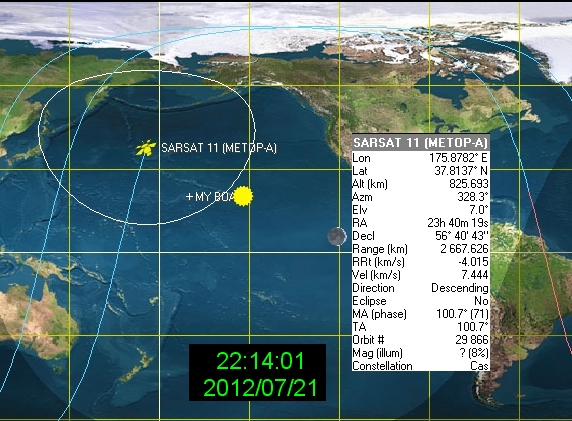 Note that Orbitron uses your computer time, so having another free app like NIST32.exe to keep your computer locked into UTC is valuable (www.nist.gov/pml/div688/grp40/its.cfm).  These are both PC apps; i do not know of Mac equivalents. Also, Orbitron calls Metop-A by the name SARSAT 11, which means the author attributes more importance to its search and rescue pay loads than the meteorology instruments. As mariners, we have to be grateful for both.... but you must know this to find it in Orbitron!

Note added June 4, 2017. This app no longer works. It was replaced with a pay version $3 only, but no reviewer says it works either!  so we have to look for another app.  There are others to test... and they will offer about the same functionality as described here, so i leave the basic idea of its use.

(4) Another, maybe most convenient of all, option is the iPhone app called Satellite Tracker by Susan Mackay. She is in Australia, I believe. http://itunes.apple.com/us/app/satellite-tracker/id306260378?mt=8  Output is shown below so you can compare all of these methods for the same day of July 21 about 2200z. It will do both Metop-A and OceanSat2. 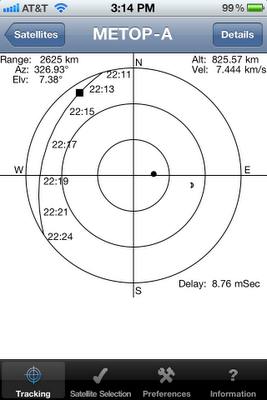 In this radar type view, the local position (20N, 170W) is in the center. Each ring is 30º of altitude. The sun is high and to the East. The moon is at about 095 at about 40º high. If you watch this app live, you see the satellite moving along the track. This example is in a descending mode, headed south but still bending to the west. 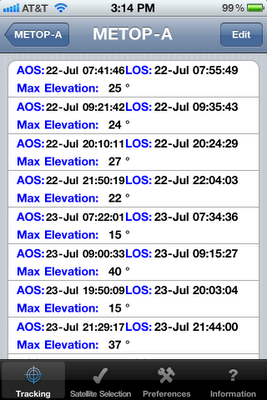 This display shows the next several passes, ascending and descending. Click any one of these in the app to get the picture above it.

In the above examples, i put the boat position at 20 N, 170 W so we could compare them. Each of these apps let you watch the satellite come cover the horizon, peak out, and then set.  For the best satellite predictions, your stand alone options (Orbitron and Satellite Tracker) require you to update the latest satellite parameters every few days, called TLE (two line element) files. They are provided by NORAD. The programs do this automatically. It takes just seconds.

These apps show all the passes, not just the ones that till yield data. If the satellite passes too low in the sky, its scatterometer can not reach out to where you are, so no data. And with ASCAT, if it passes right over head there is also no data since it has a nadir gap of no data right below it.  Its data starts some 360km either side of the track below it and then they extend out 500km from there.  OSCAT does not have a nadir gap.

It is my feeling that if we are to incorporate this valuable data into our navigation and weather routing, it pays to understand the basics of what is involved.  In other words, so you could answer the question, why don't we have data all the time, whenever we want it?

Once a satellite goes by on a favorable pass, we generally get actual ocean wind speeds and directions along those two swaths in about 3 hours.  This may seen a long delay, but recall we do not get the surface analysis maps for about this same delay past the synoptic times. So in that sense, this is as fresh as it comes in the middle of the ocean. There is another satellite (from India) sharing data with us now called OceanSat 2 (OSCAT), and hopefully more on the horizon. So this important area of meteorology is getting better all the time. These satellites are timed to give optimum coverage, not just redundancy.

Two more updates: OSCAT failed permanently in 2014—maybe there will be an OSCAT2, using a new satellite OceanSat 3.

Now we have RapidSCAT, which has good data but it is on the International Space Station (ISS), and because of that it cannot run continuously when it conflicts with other ISS projects. Also, ISS is not in a sun-synchronous orbit, so we cannot predict its location as easily, but there are numerous apps that predict it because it is visible to the naked eye—we just have to ask for "all passes," not just visible ones.

The other update is we can now get the ASCAT wind data in GRIB format from LuckGrib (mac only) or from Ocens (PC only).

If you want to know when the latest ascending and descending passes were nearest a specific Lat-Lon, see the notes in www.starpath.com/ascat.  We will try to keep that up to date.

Python is your friend...

just take a look to this project, and in particular in tests for examples:

RapidSCAT was relatively short-lived. It turned out to be too complex having it attached to the ISS. It provided data from September 2014 and operated until August 2016, but is not planned to come online again.