Below is the text of the paper where Christophorus Henricus Diedericus Buys Ballot first presented his famous law on wind and pressure in an English publication in 1863. The first appearance of this law in French was 1857. You will see that he was then Director of KNMI, which is still a world leader in meteorology research and the folks who bring us the ASCAT data.

There are several new ideas in this publication. First it appears he is proposing to carefully measure the elevation of the barometer above sea level and take that into account, which he suggests is not done properly in the past.

Then he compares the pressure reading with a value he computes for that elevation, which appears to be based on an average value for the date at hand. The difference between the measurement and the average value he calls the “departure.” Above average he calls Positive (equivalent to Highs) and below average he calls Negative (equivalent to Lows). This is effectively a calibrated atmospheric pressure, and as such the elevation of the instrument is crucial.

He then states his famous law. Namely that wind will not be blowing from High to Low pressure, but perpendicular to the line between them. He states that if Higher pressure is north of you, label the wind East and if Low pressure is north of you, label the wind West. This is all new territory for people at the time. Namely, how to correlate the wind direction with the pressure observed. Note too that he is naming the direction the wind comes from.

And he goes on to tell us some early estimates of geostrophic wind speed (in his own sort of way), namely if the pressure difference between his north stations (Den Held and Gronigen) and his southern stations (Vlissinger and Mastrich) is less than 4 mm of mercury (which is 5.3 mb) then the wind will be less than 30 pounds force on a square meter surface.... which are strange, mixed units to modern readers, but this is the way they described wind speed in those days. Note too they were all using mercury barometers in those days, which is only right as the then new (and very popular) aneroids were not nearly so accurate nor dependable. 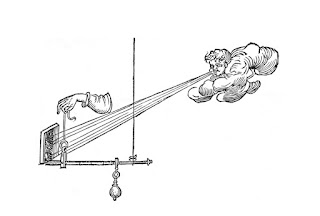 We have not used these units in our weather course or in Modern Marine Weather (but we do include a frontispiece illustration of the idea in the book, shown above), so this will take some conversion. You can use the units converter from our Weather Trainer Live for the details. Use one of the online glossaries to look up “wind pressure” to find that the force of the wind per unit area is given by Wp = ρ*V*V/2, or one half the air density times the wind speed squared. Wp is in units of Pascals, which are Newtons per meter squared, and V is in meter/sec. Thus you end up with Wp = 0.6 V*V, since density of air ρ is 1.25 Kg/meter cubed.


Below is our OCR of a hard-to-read copy of the original paper,
with a graphic we added to clarify the text.

Aug and Sept, 1863
On the System of Forecasting the Weather pursued in Holland


In the plan pursued in Holland, observations are taken at four principal places: Helder, Groningen, Flushing, and Maestricht. On the indications afforded at these places the forecasts are based.

For every day of the year, and for every hour of the day, I have very carefully determined the height of the barometer in the place of observation at that height above the sea where it is suspended. This is a cardinal point not sufficiently observed in England, and not at all in France. The difference of an observed pressure from that calculated on, I call the departure of the pressure—positive when the pressure is greater, negative when it is less. Those departures, besides the observations of the other instruments, are communicated from post to post.

When the difference of pressure of the southern places above the northern is not above four millimeters, there will be no wind of a force above 30 1bs. on the square meter. Moreover, the greatest amount of rain will fall when the departures are negative; and, at the places where the departures are most negative, there also the force of the wind will be generally stronger.
Moreover, there will be no thunder if the barometric pressure is not less than two millimeters above the average height, and when at the same time the difference of the departures of temperature is considerable.

These rules, and especially the first two, were laid down by me in 1857, in the Comptes Rendus; and on the 1st of June, 1860 the first telegraphic warning by order of the Department of the Interior was given in Holland. It was unfortunate that those telegraphic warnings were not introduced four days sooner, for in that case the first communication would have been a first warning against the fearful storm of May 28, 1860, called the Finster-storm.

All of you know how amply Admiral FitzRoy has arranged the telegraphic warnings all over England. The rules used in Holland have answered well, as is shown in the translation of a paper by Mr. Klein, captain of a merchant-ship, whereto I have added my observations and signals compared with the signals of Admiral FitzRoy. My own paper dates from June 1, 1860, and is extracted by Mr. Klein; but I preferred that the less complete and precise paper of a practical man should be translated, because I thought that the seamen would put more reliance on it. From the tables added to that translation, it appears that I have warned from my four stations just as Admiral FitzRoy has done from his twenty.

It must, however, be recorded that, besides those four stations, there are also some stations—Paris, Havre, Brest, in France, and Hartlepool, Yarmouth, Portsmouth, Plymouth, in England—that send me their observations. Generally they arrive too late; and therefore they throw very little light on the forecasting.

For the future, the normal heights of barometric pressure, or, better, of the barometers which are read, must be conscientiously taken; the observation must be made at more points once a day, and mutually communicated; and at days when there are greatly different departures—that is to say, of three millimeters—or when there is change of inclination, there must be sent a message at noon or in the evening of the same day. In all cases, not only the pressure in the morning, but likewise that at night should be given. A critical indication is when on the previous day the northern stations had greater departures, and on the following day the southern had greater departures, even when the difference in the latter case was small. A caution should be given when the difference of the departures is four millimeters.  [end of original paper] 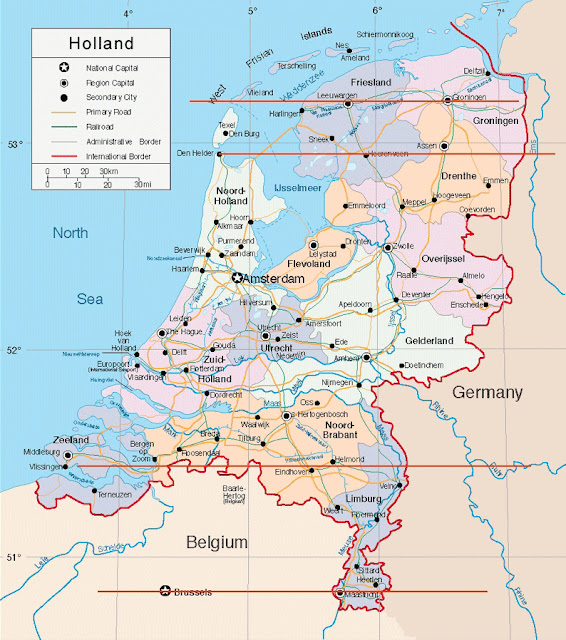 Note we found the distance by taking difference between most north and most south city = 160 mi and then the two closest were 100 mi apart, then averaged to get 130 mi, and then converted to nautical miles.

Since Buys Ballot was so careful to stake out his publication dates, the only thing we add to these notes on this milestone paper in meteorology, is that the American mathematician William Ferrel actually published the prediction and theory of this effect a year earlier (1856), but this was not known to Buys Ballot. Ferrel proposed this law in the same paper where he was the first to ever apply the concept of the Coriolis effect to wind flow, which is fundamental not only to this law but to all of basic meteorology. He went on to many other remarkable achievements in meteorology and astrophysics. But if you did not read the Appendices to the Annual Reports of the US Signal Corps or an obscure medical journal in Tennessee, you would never know it.

Ferrel was, for example, the first to propose the method, essentially still used today, for reducing elevated atmospheric pressures to their equivalent sea-level values, which Buys Ballot also saw the importance of in this paper. You will find this little known gem in the same Signal Corps Report that tries to explain the Apache chief Geronimo's use of  smoke signals!

We have elsewhere another illustration of the Buys Ballot principle intended to make it easier to remember.
Posted by David Burch at 10:00 PM