No matter how sophisticated our navigation electronics might be, safe navigation at night boils down to keeping track visually of where you are relative to navigation lights—on buoys, lighthouses, or posts in the water.

Recall that the lookout, Maureen Jones, warned the third mate in charge of the Exxon Valdez that the crucial Bligh Reef Light was on the wrong side of the bow as they sailed forward, onto the rocks. In fact she warned him twice. [*]

Efficiency is also at stake when you have limited navigation aids on the boat or aids to navigation on the waterway. You might turn into the wrong channel or miss the one you want  if you misjudge when certain lights should or should not be visible.

We have more in-depth treatments of this important topic in the book Inland and Coastal Navigation, but we present here the short version that we prepared for the R2AK team for a quick review, which accounts for examples from Canadian waters.

Visible range (VR) is how far off in nautical miles you can see the light from your elevation.

Geographic range (GR)  is how close to the light in nautical miles you must be for it to be over the horizon, as viewed from your specific elevation above the water

Luminous range (LR) is the effective nominal range when the atmospheric visibility is not 10 nmi.

h = our height in feet above the water level.

H = charted height (ft) of the light above MHW… not often do navigators account for tides in these computations but in extreme cases they could dominate the answer.

• VR is the smaller of GR and NR to the light.  We can look up NR, but we must compute GR as it depends on h and H.

GR Notes.  There are tables in the Light List that list GR for various values of height, from which you find the value for you and for the light and add them, but the height steps are generally too large to be useful for small craft. Sample at the end here.

The CND Light List has a nomogram to determine GR based on h and H, but again, this is an easy computation for better results.  Both of these solutions are presented at the end here, but a phone calculator is best solution.  Sample at the end here.

Also, when comparing those published solutions you will note that our formula gives a smaller value, i.e. the official solution has a factor of 1.17 in front of it, so our GR is 17% shorter.  Our value is easier to remember and usually more accurate. The slightest chop on the water will reduce this value by that much, not to mention that the entire analysis is not better than ±10% or so, not even counting the effect of Luminous range. On the other hand, omitting the effect of tide can have a large error for cases where H is relatively low (under say 50 ft) and the tide range is large (over 10 ft or so). Refer to the "long course" notes for sorting that out.

If the NR to light in question is 6 nmi, then you will not see it till you are within 6 nmi.  In other words, the light is well over the horizon (on a clear day with binoculars you might be able to see the lighthouse in daylight), but the light is not bright enough to see it at night till you get to 6 mi off.

Summary
Look up the NR form chart of Light List; then compute the GR from h and H, and then VR (when you see the light), will be the smaller of the two.  You will see it closer than this visible range, but not farther.  Your h is not always constant, depending on your boat.


Light on Lasqueti is only described as "FL," meaning flashing.  (See page 33 of the AK Light List for the definitions of characteristics, shown later here.)

Go to Canadian Light List, sample below.  If you search or check the Index on Lasqueti  you will not find it, which is a good exercise in this business.  So we have to guess a name, i.e. try looking under “Prowse,” and that finds it, and now you know the name of that light is False Bay Light.  The beauty of the pdf version is it searches better than an print index.  There you will see this:

Note our formula uses feet, but the Canadian tables are in meters, which accounts for the 3.28 factor.  A little practice with a cell phone calculator makes this very fast.

Now you can go on the chart, but a waypoint at that light, and then a range ring on that waypoint with radius of 5 nmi to show clearly when you will see it.  This is illustrated in the video below.

We also see Sisters Is light in the raster chart (RNC) above marked as:  Fl (2) 15s 21m 21 M.   In the Light List we learn that this group flashing light has a period of 15s, same as on the chart, meaning that is how long it takes the pattern to repeat, not the time between flashes  This would imply the light is 21 m high (69 ft) with nominal range of 21 nmi.

However, it appears that this latest version of the Canadian raster chart (RNC) is not correct.  We have to assume the Light List is correct. It says 24.3 m high = 80 ft, with a nominal range of 16, not 18.  That is the virtue of the Light List. Refer to the Truth Meter at the end here.

Note that the latest official Canadian vector chart (ENC) shown below has it right, or at least consistent with the Light List.


It is much easier for an agency on a budget to keep the vector charts (ENC) updated compared to the RNC, which are copies of the printed charts.  We compare these to the latest Navionics charts below.

This vector chart, however,  has the False Bay NR wrong, i.e. shows 6 but Light List says 5. Back to the Truth Meter.

So for Sisters Is. Light  GR= 3 nmi + SQRT(80) = about 12 nmi.  Its NR = 16, so in this case the visibility of this light is limited by our low perspective.  For most small boats looking at bright lights it will be the GR that is the limitation.

Below shows how me might plot these on a paper or echart to keep track of VR.

End of Lesson. To follow are a few background pics.


Here is a table of light characteristics from the  US Light List. 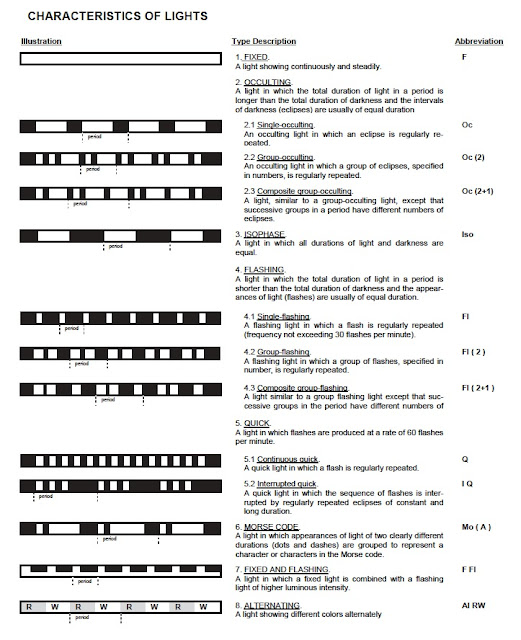 And here is a table of GR values from the US Light List
Here is the Canadian solution to the GR computation, but this definitely requires a nav station. 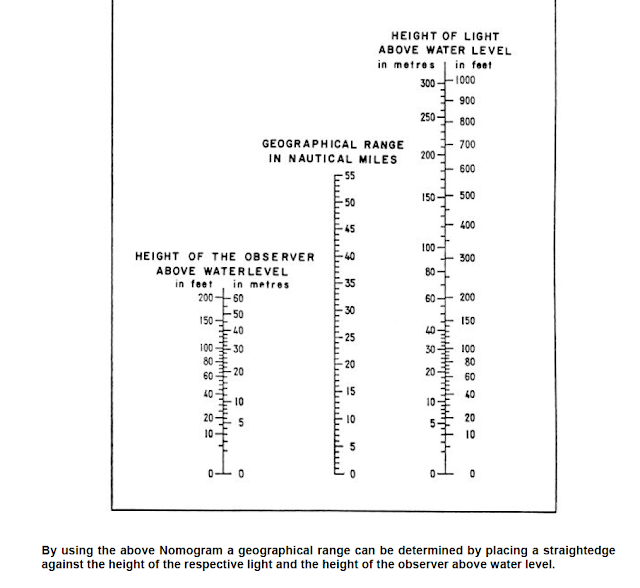 Here are the displays of these lights in the Navionics app called Boating US and Canada, which is quite a good bargain and the charts seem pretty good. It sells for $16, whereas the full set of Canadian echarts that can be run in any echart program costs $199 each for RNC and ENC. Rose Point has a nice set for $99 each that run in Coastal Explorer. For this race we made the routes in Coastal Explorer and then transferred them to both the Garmin 78s and the Navionics App... both of these processes takes some hokey pokey that I will write up in the near future.

The only thing left to add is the "Truth meter" table that compares dates of all these resources, which agree fairly well, but not precisely.


[*] It is not clear if this fundamental observation was early enough to have prevented the grounding had he responded to her first alert, or if maybe had they all looked more closely to lights on the horizon earlier it might have been prevented, but it was indeed awareness of where the light should be by one person that told everyone they were in trouble.

She was sailing as an AB, but actually had a Third Mate License of her own. These notes are from published testimony. I have no special knowledge of this incident nor of the the people involved.