Brightness of Stars and Planets

In our cel nav course we provide two textbooks: Celestial Navigation and The Star Finder Book.  A question came up in class the other day that reminded us that we have many folks learning cel nav on their own using our main textbook who may not have the second book. These folks were then missing our discussion of star brightness. This note corrects that. In the next printing of the book, we will replace Section 11.20 with this new section of star brightness. Sadly enough, Section 11.20 was the one covering time tics and storm warnings from the NIST on the HF broadcasts from WWV and WWVH. These were both discontinued on Jan 31, 2019. I will have a post on that topic later.


*  *  *
The brightness of a star is often a valuable aid to its identification. Brightness is specified by the body's magnitude. Star magnitudes are given in the star list at the back of the Nautical Almanac, not on the daily pages; star magnitudes change very little, if at all, throughout the year. The magnitude of the selected "navigational stars" are also reproduced in the Index to Selected Stars at the back of the Almanac (for years on page xxxiii). The latter is often reproduced on a yellow card bookmark.

Planet magnitudes are listed at the head of the planet columns on each daily page, because their brightness changes slowly throughout the year. The same magnitude scale applies to stars and planets. Samples are shown in Figure 11.20-1. 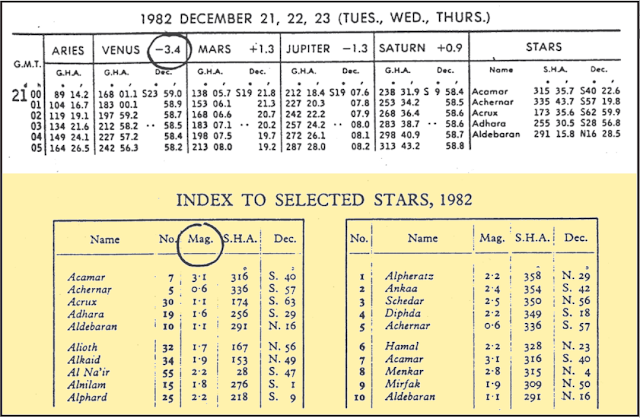 Figure 11.20-1 Star and planet magnitudes listed in the Nautical Almanac. Planet values, i.e., -3.4 for Venus, are on the daily pages; star values are in the star list at the back of the Almanac (see below). The yellow card insert shows the values for the selected navigational stars. The list at the back includes many more stars. 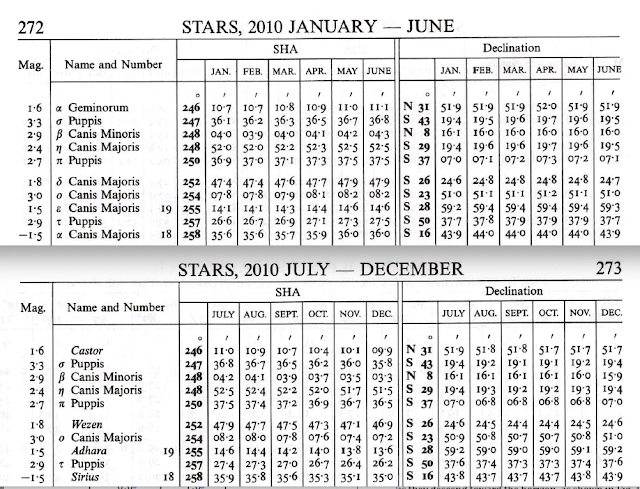 Figure 11.20-1a. Star list sample pages from back of the Almanac, showing facing pages with different star name conventions.

The Figure above shows a nuance in the star lists at the back of the Nautical Almanac. They list the star data by month, but they only show the star's proper name in the second half of the year.  Thus we learn that sigma Puppis does not have a proper name, whereas alpha Geminorum (of Gemini) is the alternative name to Castor.   We also learn that Sirius is the alpha star of the constellation Canis Major.  An "alpha star" is just what you think it is—the dominant star in the constellation.

(The system dates to Ptolemy in about 150 AD, who decided that the brightest stars we see are 100 times brighter than the faintest we can see, and then choose to divide the range into 5 magnitudes, so we end up with each being a factor of the fifth root of 100 (2.511) brighter than the next.) 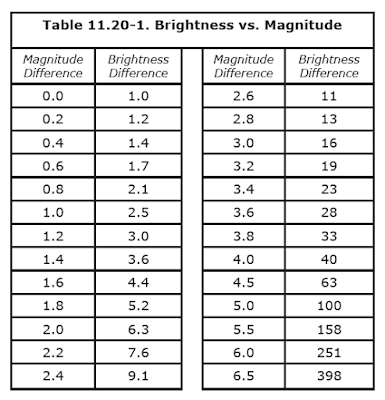 The faintest stars we might navigate by would have a magnitude of about 3.0 although it would be rare to use such a faint star. A typical bright star has magnitude 1.0, which we could say is "two magnitudes brighter" than a faint magnitude 3 star. But the actual brightness difference between the two would not be a factor of 2.0; the bright one would appear just over 6 times brighter than the faint one.

The magnitude scale can also go negative for very bright objects. Venus, for example, at magnitude -4.0 would be 5.5 magnitudes brighter than a star with magnitude 1.5. Only two stars, the southern stars Sirius (-1.5) and Canopus (-0.7), are bright enough to have negative magnitudes. Venus and Jupiter are always negative, meaning always very bright, but Mars and Saturn are only rarely negative.

For all practical star identification it is not necessary to be very technical about brightness and magnitudes. It is sufficient to classify stars in three rough categories:

Magnitude-one stars are the 20 or so brightest ones—pick a favorite and use it as your standard.

Magnitude-two stars are stars about as bright as the Big Dipper stars. There are only about 70 of these, each two to three times fainter than magnitude-one stars. And finally the

It is rare to see stars below 10º or so (a hand width) on the horizon, because there we view them through the thickest layer of the earth’s atmosphere, where much of their light intensity is lost to scattering. Even the brightest stars fade as they descend toward the horizon, as shown in Fig. 11.20-2. Consequently, if you see an isolated star low on the horizon, you can bet it is a bright one, even if it appears faint. Since bright stars are well known stars, this observation alone often identifies the star for you.

Figure 11.20-2. How star brightness changes with the height of the star.  All stars fade as they descend toward the horizon because more of their light is lost to scattering. Polaris, for example, can rarely be seen at latitudes lower than about 5º  to maybe 10º N.

Or, an isolated low “star” could be Venus or Jupiter. But this confusion is unlikely since navigators tend to keep pretty close track of where these guys are, and even low on the horizon they remain notably bright. On a clear night, a low, bright Venus can startle a weary helmsman who sees it for the first time.

For more sophisticated star ID, it helps to know that several stars are distinctly reddish. These are in a class of stars called the Red Giants, and knowing these can be a valuable aid to their identification. See The Star Finder Book for more details on star and planet ID.

The planet Mercury can be seen with the naked eye, and it can even be quite bright. But it is only rarely visible, and when it is, it will be low on the horizon, just before sunrise or just after sunset, and very near the sun. Since it is rare to be seen and always very low on the horizon it is not used for navigation. Its Dec and SHA are not listed in the Nautical Almanac.

Venus and Jupiter always stand out nicely among the stars. When either of these two are visible, they are always much brighter than any stars around them. Mars and Saturn, on the other hand, appear only as bright or medium bright stars. The main function of Mars and Saturn is to confuse the navigator by appearing as stars where no stars should be. Mars can sometimes appear reddish, and most planets will appear as tiny disks, rather than points, when viewed through 10-power binoculars.

Another identifying characteristic of planets is their lack of twinkle. Stars twinkle, planets do not. The reason can be traced to the apparent size of the light source—distant stars are point sources of light; the much closer planets are disk sources. A patch of warm air can momentarily refract all of the star light out of our eye, causing it to twinkle; but such transient refraction cannot remove all of the light from a planet since it comes from slightly different angles depending on its origin on the disk.

A consequence of the above, which comes about because the orbits of all of these bodies lie within the same plane (± 9º or so), is that planets are always found within a Zodiac constellation. With that said, the concept of constellation, let alone the Zodiac,  does not come up much in cel nav as we do not need it for anything. We do refer to groups of stars, but these are groups we make up from stars of neighboring constellations, such as the Summer Triangle.
Posted by David Burch at 8:49 PM