Does Accurate DR Matter in Cel Nav—Verb vs. Noun


When doing cel nav by traditional books and plotting, we often stress that our choice of the assumed position (AP) based on our DR position does not matter—we can always find out where we are; we do not have to know where we are to find out where we are. Once we have a fix, we can then look over the plot to see if we might gain accuracy by redoing the AP, but this is not often called for.

In other words, we do not need an accurate DR position to ultimately get an accurate fix.  Indeed, at the end of this note, we will illustrate this by doing a fix in the middle of the Pacific using the Golden Gate as our as our initial DR position.

This reasoning rather quickly brings up a conflict that sharp students spot immediately. And, indeed, we got this vary question again just recently. Namely, do we need accurate DR for cel nav? Let's answer the cel nav part first, because more broadly speaking accurate DR is the absolute fundamental aspect of all navigation,  especially ocean navigation. We address this topic numerous places in our textbooks and courses. The short answer for why is simply that no matter how guarded, all or parts of our electronic nav aids may fail us, in which case we must depend on our DR, and if we have not practiced it, we will never know how well we can do it.  Or, when relying on cel nav, it could well be cloudy at the time we depend most on navigation.

So accurate DR is fundamental to good navigation, but to get specific about its role in cel nav, we have to look at dead reckoning or DR as a verb, meaning how well am I doing the process of dead reckoning, versus DR as commonly used to refer to a DR position, which is a noun.

As far as getting an accurate cel nav fix, DR as a noun, i.e.,  how well do I know where I am when I start, does not matter at all. See example at the end.

But once we start moving, then all fixes are running fixes, and the accuracy of the fix depends on how well you know how you are moving, which is DR as a verb.

An example showing that DR position is not crucial to a cel nav fix. Below are the two sights taken well offshore used in a different post, but this time we start with our DR position artificially set at the Golden Gate, which leads to large a-values.  You can view all work forms to see where the numbers come from. 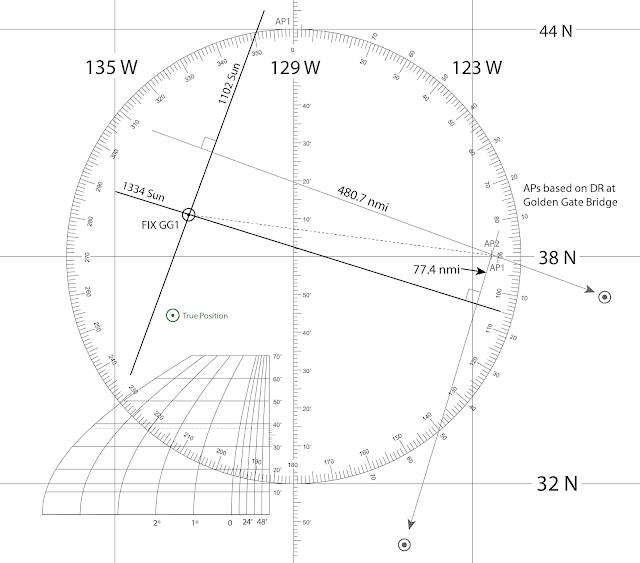 To accommodate the large a-values we make an exaggerated plot sheet with latitude parallels set at 6º apart. This generates a fix marked FIX GG1.  We then use that fix to improve the DR and do the sight reduction again, shown below. 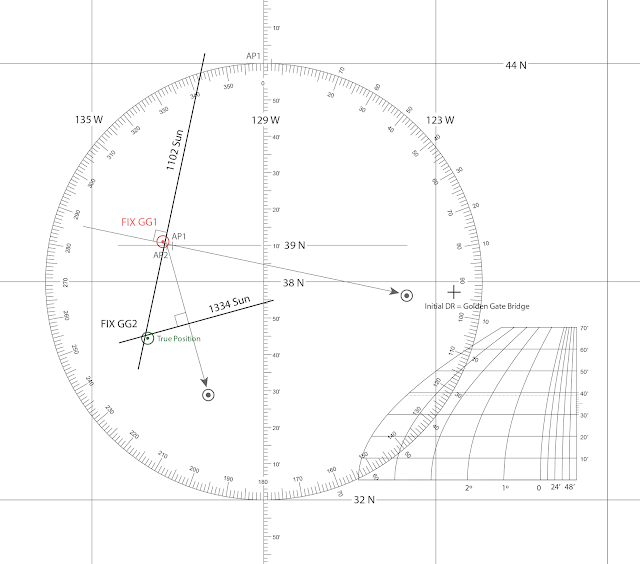 Figure 2.  Using the Fix from Figure 1 as the new DR, we get very close to the True Position.

We cannot see quite yet how close we are, which would take another plot on a different scale, but we are close, and certainly one more iteration would be enough to get an accurate fix.

Refer to the work forms to note that we are not quite there yet.  The fix is still about 10 mile off, and indeed one a-value was over 60 nmi, which is our flag to redo it.  Then we do one more iteration and get right to the true position.

In this example, it took 3 iterations of manual plotting starting from a DR that was about 500 nmi wrong. Had we done this analysis with a computer program such as the StarPilot, we would home in immediately. In passing, I note that we show elsewhere that it is really difficult to get lost by 500 nmi, even much less than that takes effort when you are conscious the whole time. In other words, what do I have to do in my own boat for how long to not know if I am in WA or CA?

A more practical example of checking that the APs are close enough for a good fix is discussed in the article linked above ( Check Assumed Positions After Plotting a Cel Nav Fix ).